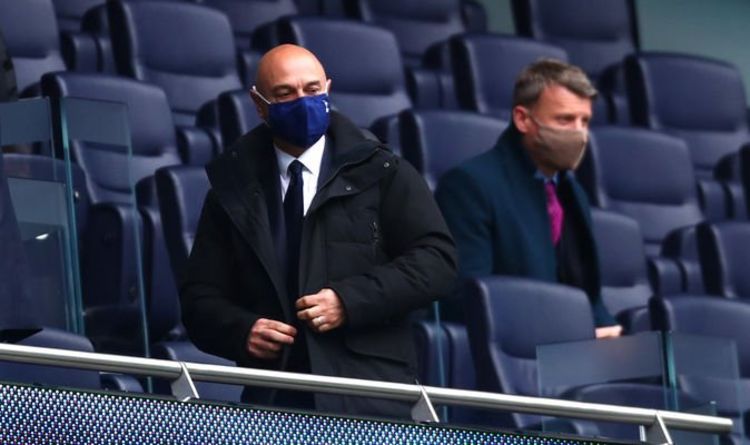 Tottenham chairman Daniel Levy has reportedly given the green light on Harry Kane’s prospective move to Manchester City. The England captain had expressed his desire to leave the club in search of trophies this summer, and after initial resistance from the Spurs hierarchy, his departure now looks a real possibility.

Levy’s decision has paved the way for a £160million move to the Etihad, supposedly on a contract worth £400,000-a-week.

City previously said that they would not be interested at that price, and it would require them to obliterate their current transfer record and wage structure to do so.

Earlier in the summer, Spurs were dead against allowing their talisman to join a Premier League rival, instead preferring to move him on abroad.

However, Levy delivered the good news to Kane via a phone call last week, according to The Sun.

The pair discussed the move as Levy explained that he had made a U-turn over his decision.

JUST IN: Cristiano Ronaldo could be about to get his own Karim Benzema at Juventus this season

The conversation came just days before the wedding of his brother and agent, Charlie.

The driving force behind the chairman’s decision to backtrack on his previous stance is thought to be a determination for Kane’s stint at Tottenham to end on a civil note after 17 years at the club.

Previous reports had suggested that some in the England camp believed that Kane could refuse to report back for pre-season training unless Levy changed his tune.

A series of near misses this campaign are likely to have forced Kane’s hand in pursuing a move elsewhere.

In April, his Spurs side missed out on the EFL Cup after suffering defeat in the final to none other than Pep Guardiola’s City.

This summer, Kane fired England all the way to the Euro 2020 final, only to lose out to Italy via a heart-breaking penalty shootout.

Indeed, all of the 27-year-old’s achievements so far have been on an individual level, therefore growing a formidable trophy cabinet is now thought to be a priority as the player enters his late-twenties.

City are the reigning Premier League champions, while they also put together their deepest Champions League run to date, narrowly losing in the final to Chelsea back in May.

Guardiola’s side could be a force with Kane through the middle, given that the Spaniard favours a front-man who can drop deep to link play, something the Englishman does exceptionally well.

Last season, the striker finished as the league’s top scorer with 23, and top assister with 14, an incredible individual achievement which was unfortunately not backed up with silverware.

Allowing a player like that to leave Tottenham was never going to be a decision taken lightly by Levy.

City were always going to have to spend big to replace a striker of Sergio Aguero’s calibre. Now that Spurs’ summer transfer window appears to be up and running, the club seem willing to take their chances going forward with City’s cash in their pockets.