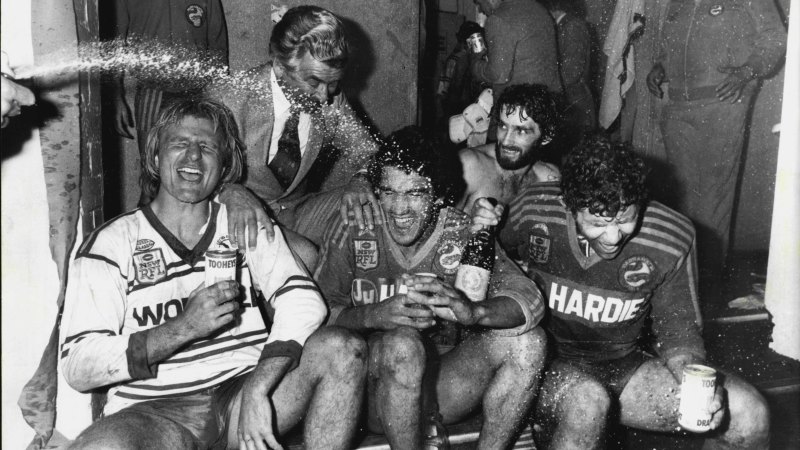 When the Parramatta Eels were in their pomp and winning premierships in the early 1980s, the players didn’t just try and spend as much time together as possible as mates. When they were together they’d be furiously trying to one-up each other.

Tennis-ball cricket, touch, time-trials, checkers … you name it and there was one Eel intensely trying to beat another. 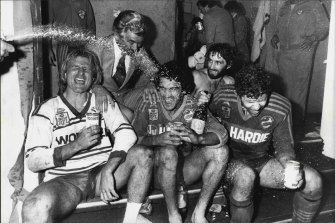 “Before games, whether we would play cricket with the old tin can and a tennis ball or ‘offside touch’, everything was competitive,” Eels great Steve Sharp said.

“Everyone wanted to win in anything we played, games, on the training paddock with 200 metre sprints or the famous 2km time trial that [legendary coach] Jack [Gibson] invented. Every time you competed you had to do better than last time and you wanted to beat the person who beat you the time before.”

Boasting a star-studded roster including Peter Sterling, Ray Price, Eric Grothe, Steve Ella and Brett Kenny, Parramatta were the tightest of groups. They would arrive at training 45 minutes before schedule just to be in each other’s company, says Sharp, and almost four decades later remain close.

It was the type of bond needed for the Eels to win three straight titles between 1981 and 1983, making them one of just four Australian teams to do so in any of the major codes in the past 50 years. 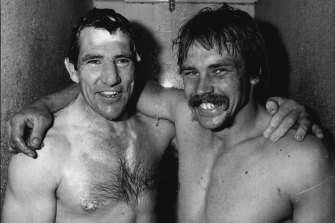 Steve Sharp, right, pictured with teammate Mick Cronin, paid tribute to the close bond between the legendary Eels of the 1980s.Credit:Fairfax Media

On Sunday evening, there could be a fifth with Sydney FC on the cusp of becoming the first team in the A-League era to win three in a row when they face Melbourne City in the grand final.

In an ominous warning to City, members of previous ‘threepeat’ sides revealed traits that are embodied by Sydney FC, who may have all the ingredients to become another once-in-a-generation teams: a close-knit squad, a winning mentality and players executing their own individual roles.

In the past half-century, only Parramatta, Hawthorn and the Brisbane Lions in the AFL and Hakoah Sydney City have won three titles in a row in their respective competitions.

For all the skill of the 1980s Eels, Sharp says a huge factor was the harmony of the team. 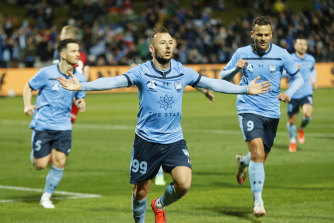 Hunting for three: Sydney FC are on the cusp of becoming the first A-League team to win three successive titles.Credit:Getty

“It was a great camaraderie between everyone in that team and it’s still there today,” Sharp said.

It’s a characteristic similar to Hakoah Sydney City when they won three titles in the old National Soccer League between 1980 and 1982. It was a side littered with talent – Jim Patikas, Todd Clarke and Jimmy Cant – led by future Australia coach Eddie Thomson and spearheaded by Socceroo great John Kosmina in attack. Just like the Eels, that star power didn’t make them a force so much as their attitude did.

That Sydney City side was a team of winners. Before titles were decided by grand finals, they won it by finishing top three seasons in a row – a feat arguably more difficult – and one title didn’t satisfy their desire. 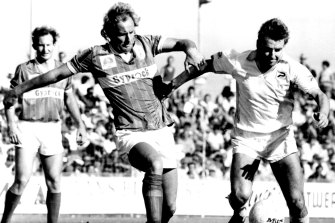 “They had a good winning mentality and did what needed to be done to get results,” Kosmina said. “If you put it today’s terminology, everyone was held to account. Training was fairly ruthless, you got stuck in at training and if you made mistakes you knew about it.”

It’s a mentality consistent with those from other great sides and the first trait that comes to mind for Simon Black when he looks back at his Brisbane Lions side of the early 2000s.

His coach Leigh Matthews assembled a squad of competitors who were never satisfied with one triumph and set high KPIs each individual had to reach. For that to translate into success for the collective, it required each player focusing solely on their individual roles, doing no more than required but always executing their duties.

“If you look at the sides in any sport who aren’t at the top of the tree, some individuals do more than just their role. If you invest and buy in, you get the clarity from the coaching group about your role and do just that. That’s all you had to do,” Black said. 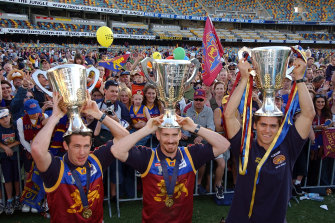 That understanding of roles has been put to the test for Sydney FC recently. They lost three Australian internationals due to Socceroos duty this month but haven’t slipped amid the reshuffle with young players filling in for their biggest names. In an outplaying a near-full strength Adelaide United in the semi-final last week, Kosmina saw that innate knowledge of each individual’s duty.

“They are confident to do their jobs the best they can, they focus on their roles, they have their principles they play to, we know how they play but they just do it so well,” he said.

It’s reflective of the close bond in a stable squad – one that has barely changed in personnel over the past three years. Their coach, Steve Corica, has never left the club since joining as a player in 2005. Over the course of their remarkable run in recent years, their burning hunger for success hasn’t tapered despite the trophies.

“They have got a good winning culture, it’s a lot more modern now,” Kosmina said. “The world has changed, society has changed, attitudes have changed but I can see that same winning mentality within the Sydney FC group.”

July 2, 2021 Soccer Comments Off on What the legendary Parramatta Eels of the 1980s can teach Sydney FC
NFL News