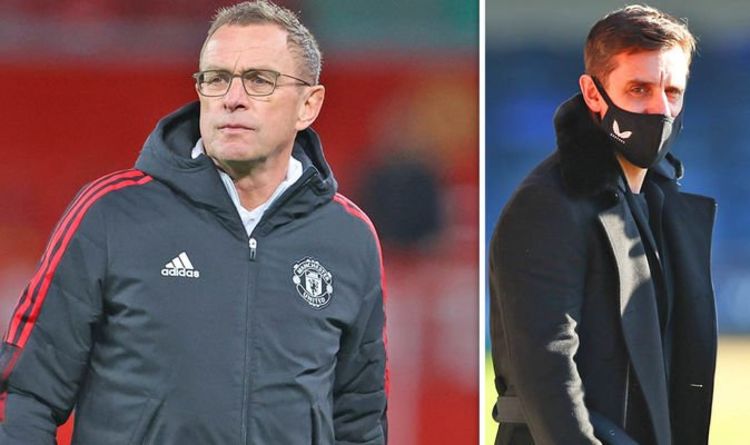 Manchester United boss Ralf Rangnick reportedly told players to sort their attitude out after Gary Neville recently blasted them as ‘whingebags’. The Red Devils have endured a nightmare season so far. And Monday’s defeat to Wolves has now seen the club hit rock bottom, as well as plunging their hopes of Champions League qualification into uncertainty.

At the start of the season, many expected United to threaten the likes of Manchester City, Chelsea and Liverpool for the Premier League title.

Yet with the Red Devils winning just nine of their 19 league games so far, they’re now closer to the bottom of the table instead.

United have struggled, with their best players such as Cristiano Ronaldo, Bruno Fernandes and Harry Maguire all unable to achieve consistency.

And while they sacked Ole Gunnar Solskjaer in order to arrest their slump, Rangnick is facing many of the same issues as his predecessor.

There are players, such as Jesse Lingard, Edinson Cavani and Donny van de Beek, who simply don’t want to be there anymore.

And there are serious questions being raised over their attitude, too, as the club continue to falter.

Speaking recently, United legend Neville called the players ‘whingebags’ after they’d been dreadful in a 1-1 draw against Newcastle.

“The basics of the game, every single battle, they’ve lost. That’s been a really poor performance.

“They’re a bunch of whingebags. Watch them on that pitch.

“Arms in the air, complaining about everything. They got the last manager the sack [and] they’ll get a lot of managers the sack, that lot, if they carry on like that.”

Neville’s words appear to have struck a cord with Rangnick behind the scenes, according to the Daily Mail.

It’s claimed the 63-year-old, in the aftermath, warned players to ‘sort out’ their awful body language.

However, the squad haven’t appeared to have listened.

United were abysmal in their 1-0 defeat to Wolves on Monday, deservedly losing due to a late goal from veteran midfielder Joao Moutinho.

And Rangnick will need his players to respond when they lock horns with Aston Villa in their FA Cup clash on Monday.

It appears, however, that more dark times lie ahead for the Red Devils and everybody associated with the club.

United have fallen way behind since Sir Alex Ferguson’s retirement in 2013, with the club virtually unrecognisable from what it used to be.

Next year will mark a decade since their last Premier League title, while failure to win the Champions League this term will see their wait for that prize extended for a 13th year.

Rangnick has spoken well in press conferences, insisting he wants to bring ‘control’ to the club.

Yet like predecessors such as Solskjaer, Jose Mourinho, Louis van Gaal and David Moyes, he’s encountering many issues.

“The attitude of the players. Sancho, for me, was brought in for a big fee and didn’t take anybody on,” he said.

“Semedo had the easiest game of his life. Sancho didn’t take him on, just passed it backward. He had no confidence.

“Rashford came on, it looks like he’s sulking with his body language. Whenever the camera was on him he didn’t look happy.”

On Rangnick specifically, he added: “He reminds me of a headmaster at a school who’s been brought in to be a manager. He’s a millions miles off it.

“It just sums up Man United as a club over the past few years. They can’t get anything right.

“Ole wasn’t the man. They’ve gone to Rangnick for whatever reason and he’s not good enough.

“It comes to a time where it doesn’t matter if there’s no manager, players have got to take responsibility. Players can take it into their own hands and put in a performance.

“That team, and Sancho, they were shocking. The tactics were all over the place.”