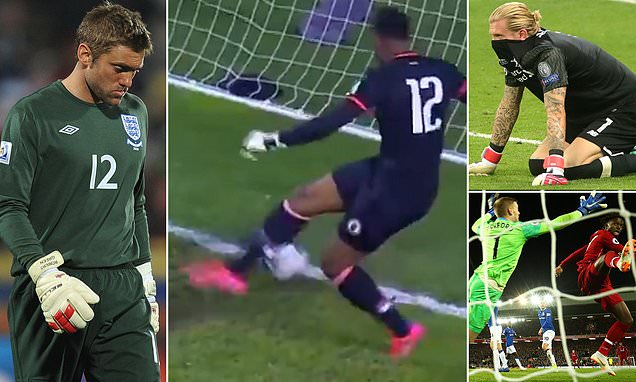 The oldest cliche in the book says that there’s no place to hide for goalkeepers when they make errors, and Josue Duverger was the latest player to discover just that earlier this week.

The Haiti goalkeeper was playing against Canada in a CONCACAF World Cup qualifier when he went to clear danger with his right boot from a pass back.

But a comedy of errors spanning around four seconds saw the opposition go 2-0 up in the match, and a horrified Duverger immediately put his head in his hands before having a brief look at the ground, as if to search for a divot in the pitch.

Duverger however is not the first goalkeeper to make a blunder on some of world football’s biggest stages, with World Cup matches and even a Champions League final seeing some of the most embarrassing moments for keepers.

Here, Sportsmail looks at some of the worst moments for goalkeepers over the years, to determine which blunder was the most shocking of them all. 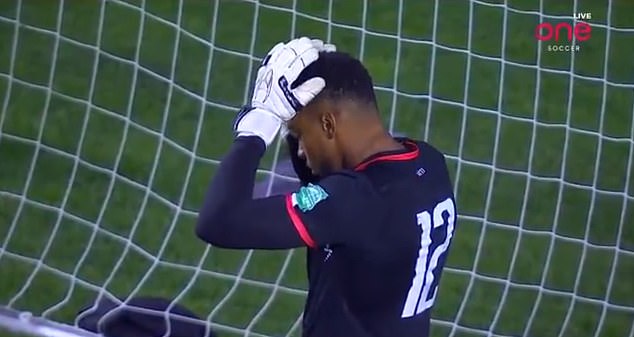 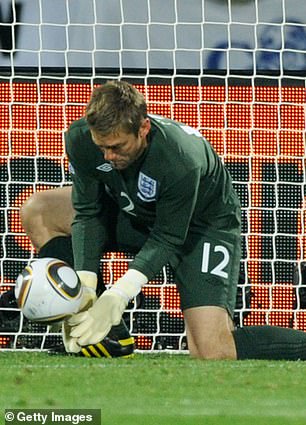 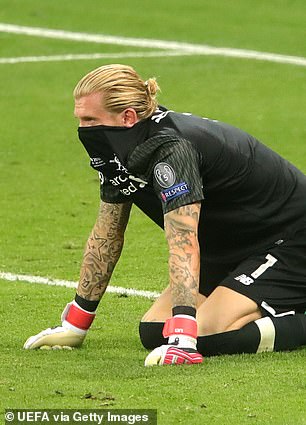 The former Republic of Ireland international was one of Newcastle’s most consistent performers during his 12-year stay at St James’ Park.

His errors were few and far between, but during his first season in the north east he made one of the most calamitous errors in the history of the Premier League due to a lack of concentration and awareness.

All appeared well when he acrobatically claimed a deep cross to the back post, with Deon Dublin lurking.

The then Coventry City star was technically off the field but Given failed to realise that Dublin was behind him, leading the keeper to bounce the ball once and then chuck it onto the floor.

At that point Dublin accelerated, taking advantage of how far Given had thrown the ball in front of him and finished first time with a low finish, leaving the Irishman startled.

This match was revisited earlier this month ahead of England’s win against Croatia at Wembley in the Three Lions’ opening game of Euro 2020.

And while Croatia could not repeat the upset they caused at that same stadium nearly 14 years on, the match will eternally be remembered as the death knell for England’s Euro 2008 hopes and errors from goalkeeper Scott Carson.

Midfielder Niko Kranjcar found space 30 yards out with eight minutes of Croatia’s eventual 3-2 win gone, and let fly with what appeared at best to be a speculative dipping right-foot shot.

But the effort bounced just in front of the keeper and Carson – who had come in for the dropped Paul Robinson – fumbled the shot and could only parry the ball into the roof of the net.

Carson was just 22 at the time and looked shellshocked for the remainder of the evening, and this clanger will live long in the memory for all the wrong reasons.

Nicknamed El Loco for his ‘sweeper-keeper’ playing style and his general flair as a goalkeeper, few have combined the mesmerising with the absurd to the extent Higuita did in his career.

The former Colombia goalkeeper will forever be remembered for his scorpion kick against England in 1995.

But far most costly, and in reality less well-known, moment on the field came with a costly mistake in a World Cup last-16 match against Cameroon five years previous.

Receiving the ball in the centre of the pitch around 30 yards from goal, Higuaita attempt to see off the challenge of Roger Milla with a drag-back.

But instead he had his pocked picked and the legendary Cameroonian raced away and had the simplest task of placing the ball into an empty net, despite Higuaita’s last-ditch attempt at a merciless hack.

Massimo Taibi only played four matches for Manchester United, and on the evidence of this blunder against Southampton, it is easy to see why.

Taibi committed errors in a 5-0 loss to Chelsea and 3-2 victory against Liverpool, but neither was more high-profile than letting Matt Le Tissier score at Old Trafford.

United were leading 2-1 when the Italian goalkeeper let Le Tissier’s scuffed shot from 25 yards out to wriggle through his arms, dribble under his body and then trickle over the line.

Taibi saved a potential last-minute winner from James Beattie with his foot, but The Sun dubbed him the ‘Blind Venetian’ after the error in the eventual 3-3 stalemate, and he moved back to Italy with Reggina in January 2000.

There was no doubt that the Frenchman enjoyed a successful career in the game, having won the World Cup with his country in 1998.

But his time at Manchester United was plagued with erratic displays, no more so than in a Premier League match against Arsenal in 2001. when he made two errors in a 3-1 defeat for Sir Alex Ferguson’s men.

The beneficiary on both occasions was compatriot Thierry Henry, who first slid an effort past him after having a clearance from Barthez hit straight at him.

The goalkeeper then failed to claim a ball over the top despite coming out and sliding to claim it, allowing Henry to find the empty net.

Arsenal and United’s rivalry dominated the Premier League stage for the first half of the 2000s, but few saw such high-profile mistakes.

The clanger that all England fans quickly scamper to hide behind the sofa to avoid watching whenever it is replayed.

England’s opening game of the 2010 World Cup was going well, with Steven Gerrard putting Fabio Capello’s men into an early lead against USA.

And there appeared to be no trouble when former Fulham and Tottenham forward Clint Dempsey was running towards goal and being tracked by Gerrard.

Having wriggled away from the former Liverpool midfielder, Demsey hit a speculative 25-yard effort with his left foot, which went right down Green’s throat.

Yet somehow, to England supporters’ disbelief, the effort managed to escape his grasp despite being in a good position, and it trickled agonisingly over the line.

The mistake saw England held to a draw, and marked the start of what was a disappointing campaign for the Three Lions in South Africa.

The England No 1 has a history of causing drama in this fixture, having ended Virgil van Dijk’s 2020-21 season with a horror challenge in October’s Merseyside derby.

And while the Dutch defender – nor the Reds for that matter – would have been too pleased with that tackle, Pickford offered a helping hand to them a couple of seasons before that right at the death.

It was van Dijk’s miscued volley that led to the blunder, with the effort looping high into the dark sky and seemingly destined to cause no harm to the Everton goal.

Pickford however misjudged the flight of the ball and thought it needed tipping over the bar, and after failing to get a touch on it, saw Divock Origi head home in the sixth minute of stoppage time to send Anfield delirious. Of all the games…

Whether the goal should have stood remains up for debate, but the Merseyside derby is not the only match which has seen a gaffe committed between city rivals.

Former Aston Villa defender Olof Mellberg took a routine throw in and chose to send the ball back to his goalkeeper, Peter Enckelman to take a touch and start the next move for the visitors.

But the Finnish goalkeeper struggled to control the ball in the first place, and that mistakes had spectacularly disastrous consequences.

The ball went underneath his boot and into the corner of the net to send the Birmingham fans wild as their side’s lead doubled.

The laws of the game say goals cannot be scored direct from throw-ins, but the referee, David Elleray, deemed that Enckelman had made contact with the ball and allowed the goal to stand.

Scenes then turned ugly as several home supporters ran into the box to taunt him and make gestures, while one actually slapped his face, but to this day Enckelman claims he is ‘90% sure’ he didn’t touch it.

The most recent entry in our list and is perhaps the most bizarre of all the errors to have featured.

Haiti defender Kevin LaFrance played his goalkeeper a routine back-pass from just outside his own penalty area but Duverger made a mess of controlling it.

The ball rolled under the shot-stopper’s foot and towards the net but slowly enough for him to retreat and make a clearance.

However, as Duverger went to clear the danger with his right boot, his standing foot made contact first and he ended up slicing the ball into his own net.

To make matters worse, Duverger was born in Canada and was called up to the U17 team for an evaluation in 2016, before going on to represent Haiti.

It was a night of tears and apologies for Loris Karius on the biggest stage of all in club football, with two mistakes in Kiev.

The game was finely poised at 0-0 in the second half when Karius’s throw was intercepted by Real Madrid striker Karim Benzema and the ball needed no further touch to send it into the net.

The German then also spilled a long-range effort from substitute Gareth Bale slip through his fingers to hand Madrid their 13th and latest European Cup to date in a 3-1 victory.

The 27-year-old has since been on loan spells at Besiktas and Union Berlin, but it will take something special for his blunders in Ukraine not to be how he is remembered.

July 2, 2021 Soccer Comments Off on What is the WORST goalkeeping error of all-time?
NFL News