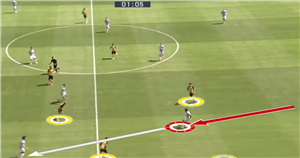 The 19-year-old put pen to paper on a professional contract with the Gunners on Friday after the club parted with £600,000 to bring him to the Emirates.

Mikel Arteta and technical director Edu will be all too aware of the skillset and long-term potential Rekik possess, which is why they were quick to make a move for him in this window.

Yet for many Arsenal fans, he is still somewhat of an unknown quantity, especially given that he didn’t make a single Bundesliga appearance for Hertha.

The teenager is set to join up with Steve Bould’s U23 side initially, but based on his performances at various youth levels so far, what can we expect to see from the defender in the coming years in North London?

Firstly Rekik stands at 6ft 1in and is well-built for his age, this aids him in 1v1 duels with opposition forwards. From a sample of just over 4400 minutes playing at various youth levels across the past three seasons, the Turkish U21 international boasts a solid defensive duel success rate of 67 per cent.

For comparison, Arsenal’s two most used centre-back’s this season, Rob Holding and Gabriel Magalhães, have a Premier League defensive duel success rate of 62 per cent and 59 per cent respectively.

Rekik makes use of his decent size to command in the air too, winning around 63 per cent of his aerial duels. Again for comparison, Holding has won roughly 46 per cent of his battles in the air so far whilst Gabriel has been slightly stronger at 58 per cent.

Obviously, Rekik has faced easier opposition when compared to each of Holding and Gabriel in the Premier League, yet, he’s still some years younger than each of those players. Therefore for his age with these numbers are very promising.

Rekik has been predominantly used as a right-sided centre-back due to being right-footed. However, there’s clearly versatility to his game, highlighted by the fact Hertha have also used him as a left-sided centre-back and through the middle within a back three.

Beyond being strong in defensive duels, which although important, does only account for a small part of a defender's game, the 19-year-old has also illustrated a capacity to read the game well and be a leader within the defensive line – facets crucial to his overall appeal.

What else hugely aids his suitability to Arteta’s Arsenal is his ability with the ball at his feet. Based on his early career so far, it’s not unfair to label Rekik as a ball progressing centre-back who looks unphased in possession. He was regularly used to commence attacking sequences at Hertha and exhibited an ability to play a number of penetrative passes through the lines when required to do so.

An example of the same is below, taken from a fixture against Dynamo Dresden earlier in the season. The play starts with Rekik receiving a pass from his fellow centre-back. The opposition attacker presses to cut out the pass back to his teammate.

This is no issue for the 19-year-old though who carries the ball forward before playing a good pass through two opposition defenders and into the feet of his attacking teammate ahead.

Notably from that same aforementioned data sample, Rekik has averaged over 57 passes per 90 with a success rate in those passes of 88 per cent. He has also attempted roughly eight passes into the final third per 90, with 69 per cent of those passes finding a teammate on average.

Like in the example above, Rekik isn’t afraid to step out of the defence when required to do so. This is important when facing a side is sitting in a deep and compact shape inside their own half and it’ll almost certainly aid Arteta’s possession-based philosophy.

Based on the evidence above, it’s easy to see why Arsenal were so attracted to the teenager. He’ll require a period of adaptation and further development before he’ll be in a position to challenge for a place within Arteta’s starting 11. Yet, the prospects look good for a bright future in North London for Arsenal’s new boy.

January 13, 2021 Soccer Comments Off on What Arsenal fans can expect from Omar Rekik in detailed scouting report
NFL News