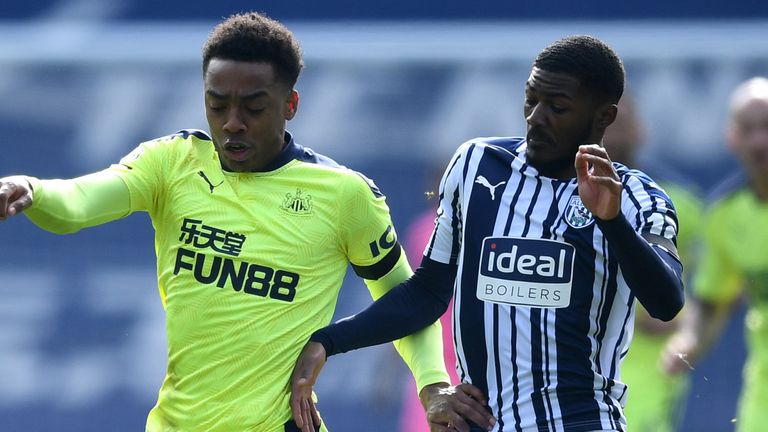 Report and highlights as West Brom’s survival chances took another hit as Newcastle’s organised defence kept them at bay; Sam Allardyce’s team are eight points from safety and the gap to Newcastle remains at nine

West Brom and Newcastle played out a goalless draw as Steve Bruce ended a turbulent week with a positive result in a game low on quality.

In an encounter full of endeavour but zero quality, the Baggies created the better opportunities but couldn’t take advantage of the 29 crosses they put into the Newcastle box with Mbaye Diagne continuing his luckless run in front of goal.

Jamaal Lascelles and Ciaran Clark were the stars for the visiting Toon, who carried little threat in attack without Allan Saint-Maximin, Callum Wilson or Miguel Almiron.

This will be seen as a better result for Newcastle than West Brom as the gap between the two clubs remains at nine points and Sam Allardyce’s side are eight points from safety.

Man of the match: Conor Townsend

Bruce would have wanted a reaction from his players after a turbulent week and they started with good intent. Joelinton had an effort blocked after a clever break by Ryan Fraser before a goal-saving tackle by Darnell Furlong denied Fraser a tap-in.

West Brom settled as the half wore on with Conor Townsend proving a good outlet from the left. His cross produced the best chance of the half but Diagne’s clever header was palmed around the post by Martin Dubravka.

Bruce rolled the dice just 11 minutes after the break when Dwight Gayle replaced Jeff Hendrick as West Brom were beginning to pin the Toon back with Matt Phillips striking Townsend’s cross over from eight yards.

Gayle almost made an instant impact when he teed up Joe Willock to test Sam Johnstone at his near post on the hour.

Some superb wing play from Ainsley Maitland-Niles should have presented Diagne with a much-needed goal but he awkwardly missed his kick from close range.

As the Baggies began to tire Newcastle exploited the extra space and Johnstone saved low from Joelinton with 20 minutes left.

That was the last we saw of Newcastle as an attacking threat as they soaked up pressure in the closing stages with Clark and Lascelles clearing all the loose balls in their area.

Man of the match: Conor Townsend More performances like this from the Baggies full-back and he won’t be playing in the Championship next season as he looks a Premier League player all over. Someone will surely snap him up. His marauding runs down the left was West Brom’s best weapon and he can feel aggrieved with his team-mates for not taking any of the chances he put on a plate for them. Townsend created five chances in the match, the most from open play by a West Brom player in the Premier League since April 2014. His quality shone in a largely forgettable affair.