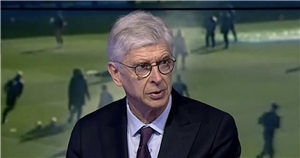 Arsene Wenger did not have high hopes for Thomas Tuchel’s Chelsea after their draw against Southampton back in February – and his prediction came as a shock to Richard Keys.

The legendary former Arsenal boss gave his thoughts on the Blues following their 1-1 draw at St Mary’s, tipping them to miss out on Champions League qualification.

Along with that prediction, the Frenchman said that his former rivals were not showing potential in several key areas despite the impact of Tuchel.

At the time of the fixture, Chelsea had won five of their seven matches under the former PSG boss, conceding only two goals and sitting fourth in the table.

“I would say it’s a fair result with one team happier than the other one, Southampton certainly the happier after stopping their losing slump,” Wenger said on beIN Sports.

“So I looked just at their number of points, on that run they will make 63 points. That could be a fraction short of top four.”

A chuckling Keys told Wenger in disbelief: “[It’s] Remarkable how your mind works. That’s the last thing that was on mine. “So you think they’re on the cusp of maybe not qualifying?”

Wenger went on: “I just think they made 43 points out of 25 games and on that average it gets you to 63 and 63 usually you’re out.

“They can of course have a great run but today their game was a bit frustrating for them. They didn’t find the fluency to put Southampton under pressure.”

Fast forward to the end of April and Chelsea have not only reached the FA Cup final and Champions League semi-finals – but are still fourth in the table.

That is testament to the good work done under their German boss, who was pleased by his side’s performance in their 1-1 draw with Real Madrid in their first-leg meeting.

He said: ”We started the game very well, very aggressive with a lot of courage and a lot of quality. We had many ball wins, good control, good attacks, good switch of play, very confident, we looked very strong.”