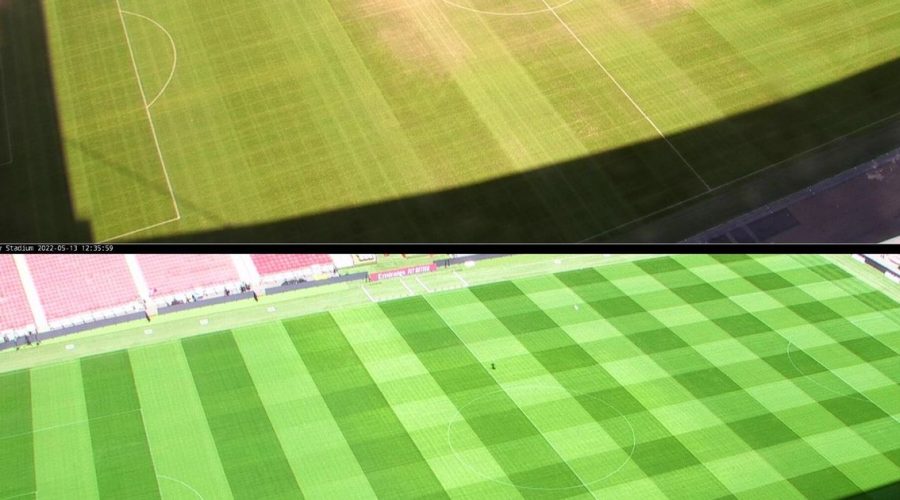 As Chelsea and Liverpool walk out onto the Wembley pitch on Saturday for the FA Cup final, the players will think nothing of the pristine surface they will play on as long as it looks like a carpet.

But considering that only 17 days ago, on April 23, Tyson Fury beat Dillian Whyte in a boxing match watched by over 100,000 people, it is nothing short of astonishing that the pitch is in fine condition.

Fury won by TKO in Round 6 to defend his WBC and The Ring heavyweight titles in front of the largest post-war boxing crowd the UK has ever seen — and two more heavyweights are set to battle it out as Chelsea and Liverpool tussle at Wembley for the second time this season.

Yet that hasn’t stopped Wembley’s busy ground staff from pulling off a miracle in time for the clash. Images uploaded to Twitter on Saturday evening by Karl Standley, the FA’s head groundsman, appeared to show the extent of the damage done with a ‘before and after’ comparison of the pitches. Chelsea and Liverpool may have been horrified to see the state of the greenery after the seating and boxing ring were carried off.

But contrast that to the incredible surface that now exists just two-and-a-half weeks later, there can surely be no complaints from either Jurgen Klopp or Thomas Tuchel given the turnaround in such a short space of time. Where there were patches of brown, there are now perfectly trimmed blades of green grass. The tramlines have been cut into alternating shades of green and the lines repainted to give it that new-turf feel.

Standley praised his team for the turnaround on social media writing: “Fury Vs Whyte, 94,000 and 12,000 on pitch with hundreds of tonnes around the canopy/ring,” he wrote, with emojis pointing to the contrasting images. “Emirates Cup final, 17 days in between images on a grass surface. Incredibly proud of my team on this turnaround.”

HAVE YOUR SAY: Who will be crowned FA Cup winners? Comment below.

Pitch care in English football has taken a step forward in recent years due to the advancement of technology, with clubs now using carbon dioxide lighting tents to improve the state of their pitches. The lamps help speed up the process of grass growth, with the FA and clubs such as Chelsea spending thousands on improving their equipment in recent years.

Wembley has often struggled to cope with the sheer mass number of events that take place at the stadium, with music concerts, NFL games and other activities taking place year-round. The pitch also undergoes a testing time in May due to the increase in temperature and number of matches played, with three play-off finals and non-league trophy matches.

Given that the highest level of football demands an outstanding pitch for players to show their best football, those groundspeople working at the national stadium deserve something shiny and gold for their tremendous efforts into ensuring they have the best chance of doing so.