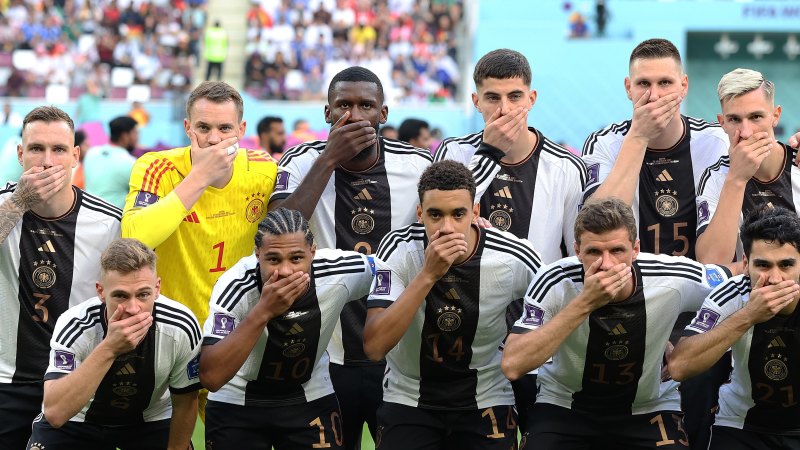 The FIFA World Cup is arguably the most watched sporting event in the world. It offers a global stage for athletes to showcase their prowess. Few could forget the spectacular goals from the likes of Diego Maradona and David Beckham. For most players, it is the pinnacle of their careers.

This week, Qatar was the centre of the soccer world’s attention, as it hosted the opening games of the 22nd World Cup. Thirty-two nations are fighting to be anointed as the world’s best. 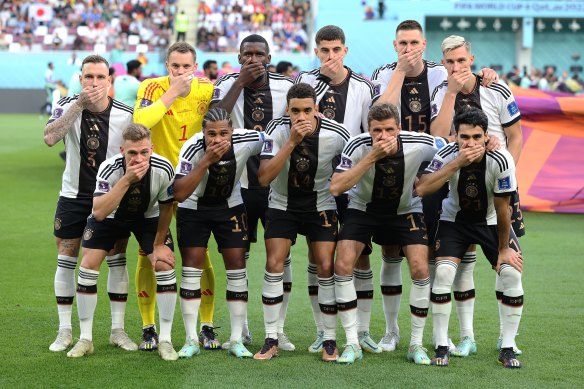 While there were some remarkable results on the pitch – who would have picked Saudi Arabia to defeat powerhouse Argentina or Japan to dispense with Germany? – also prominent have been the displays of protest on and off the field from players, fans and public officials.

It should hardly come as a surprise. From the moment in 2010 that world soccer governing body FIFA chose the exceedingly wealthy Persian Gulf nation of Qatar to host this year’s event, it has courted controversy.

Since that decision, many of the FIFA committee members who voted for Qatar have been accused of or charged with corruption.

Qatar has also attracted a great deal of criticism. In order for the nation of 3 million people to construct seven new stadiums (the eighth was refurbished) and the enormous infrastructure required to host more than a million fans at a cost of $325 billion, it had to recruit hundreds of thousands of migrant workers. Many have complained about the poor working conditions that have resulted in what some estimate to be thousands of deaths.

Qatar’s attitude towards the LGBTQ community has also come under scrutiny. Homosexuality remains illegal under the country’s laws and, as a measure of the hostility towards the community, in the lead-up to the tournament a Qatar World Cup ambassador described same-sex relationships as “damage in the mind”.

In October, the Socceroos were the first World Cup side to release a collective statement of protest against Qatar’s human rights record, calling for “effective remedy” for migrant workers and the decriminalisation of same-sex relationships.

Several European teams had also put FIFA on notice that they wanted to show support for the LGBTQ community by wearing anti-discrimination armbands. FIFA failed to respond to the players’ request to protest until just hours before England, one of the teams that pledged to wear the armbands, took to the field. Instead of backing the players, FIFA threatened to issue yellow cards against those who wore them.

The ruling appeared to quash the armband protest, until Germany took to the field in their first match. While the players followed the no-armband edict, when they gathered for the obligatory team photo, they covered their mouths with their hands to suggest they had been gagged by football’s governing body. The image quickly became a global talking point.

Six players also wore boots with rainbow stitching and the entire team wore tops with rainbow colours on their sleeves in the warm-up before the game.

While FIFA could rule on the players wearing armbands, they had no control over public officials. In embarrassing photo-ops for FIFA, Germany’s interior minister and Belgian’s Foreign Minister wore the OneLove armband when they met the soccer association’s president, Gianni Infantino. 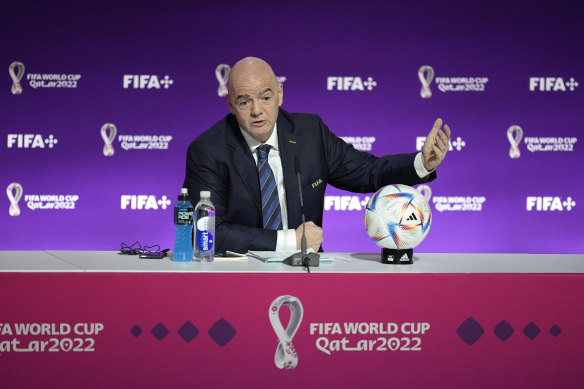 Gianni Infantino: “As a child I was bullied because I had red hair and freckles.″⁣Credit:AP

Infantino had shown a tin ear in a bizarre press conference just before the tournament opened, in which he compared his experience as a red-haired child of Italian migrants growing up in Switzerland to those facing mistreatment in Qatar, and accused European nations of hypocrisy over their history of colonialism.

It’s not just issues in the host nation that have some players and fans riled. Iran’s players were silent and stone-faced as their national anthem was played at the start of their match against England. It was widely seen as a snub to their government, which is brutally trying to quash a popular uprising sparked by the death of Mahsa Amini, a 22-year-old Kurdish woman arrested by the morality police. Iranian supporters in the crowd also showed their support, carrying signs that read, “Woman, life, freedom”, the central slogan of the protests.

Many argue that a line should be drawn between sport and politics; that the players should stick to what they do best on the field and leave others to contest issues beyond that.

What is evident, though, is that some players feel deeply about issues that are well beyond their day job. As Germany’s captain, Manuel Neuer, said after his team’s match:  “FIFA will never silence us; we stand for our values and for human rights. We wanted to show that.”

The Australian players who took part in the video protest also, no doubt, believed strongly in what they said. And the Iranians players who took a stand have taken a great risk in challenging their government.

This World Cup is sure to be remembered for the masterful displays of sporting skills on the field. But it should also be remembered by the acts of support for those who are being persecuted and mistreated, whether that be in Qatar or other nations. Soccer is a global game. Human rights are a global issue. One should be able to play one while advancing the cause of the other.

Michael Bachelard sends a newsletter to subscribers each week. Sign up to receive his Note from the Editor.

November 25, 2022 Soccer Comments Off on We should not have to choose between a beautiful game and a better world
NFL News