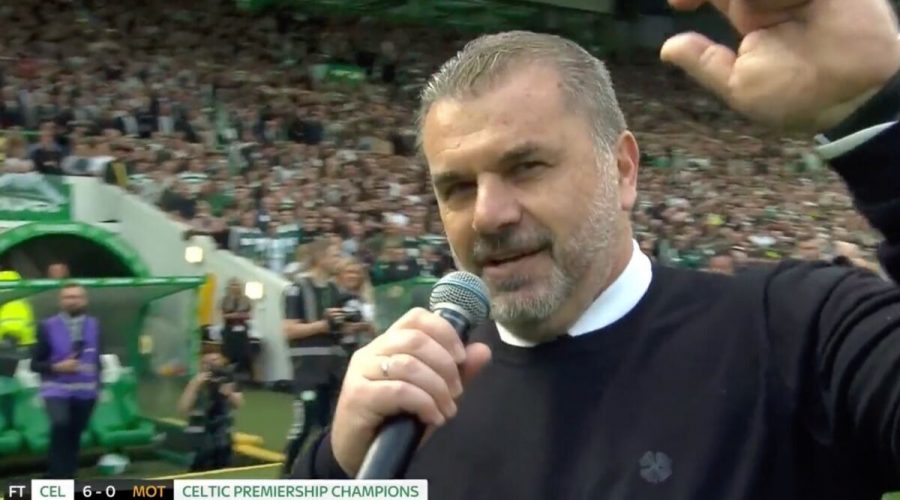 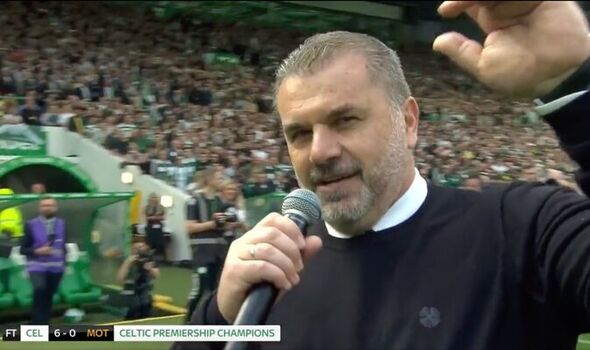 Celtic fans were sent into a frenzy at Celtic Park as Ange Postecoglou delivered a rousing speech to celebrate beating bitter rivals Rangers to the Scottish Premiership title. Postecoglou spoke to fans inside the ground before the trophy presentation following their 6-0 drubbing of Motherwell on Saturday.

Goals from David Turnbull and Jota alongside braces for Kyogo Furuhashi and Georgios Giakoumakis saw Celtic Park in full party mode on a sunny Saturday afternoon in Glasgow. Having drawn with Dundee United on Wednesday evening, the Hoops claimed the title back from Rangers after their cross-city rivals halted an unprecedented streak of 10 titles in a row under Steven Gerrard.

Having been a relative unknown upon his appointment in the east end of Glasgow, the attack-minded Aussie has masterminded a return to the top of the summit to bring the glory days back to Parkhead. And with the crowd relentlessly chanting his name, the Greek-born hero gave an emotional speech which lifted the roof off of Celtic’s home stadium.

“Champions. That’s who we are!” Postecoglou said as caught by Sky Sports cameras. “I just want to thank everyone involved from the board and management, I have the best staff in the land. An unbelievable effort.

“I’ve got a group of players who have been unbelievable, champions of Scotland and well deserved. And for you, the best [fans] on the planet, unbelievable. You’ve embraced me, embraced my family, embraced this [now famous] jumper.

I want everyone to enjoy today, enjoy the summer and we’ll come back bigger and better, because we never stop!” Celtic went top of the league after a resounding 3-0 win over Rangers in February saw them overtake their rivals.

The motto ever since has been ‘We don’t stop’, alluding to their nine title wins from a possible 10 prior to last year’s blip when Rangers were triumphant. And fans shared their delight at Postecoglou’s recognition of his achievements.

“What a speech. We. Never. Stop,” @CelticLisboaa tweeted. Meanwhile, @TanyaHennebry1 said: “Had my hubby in tears and that’s not something that happens often.”