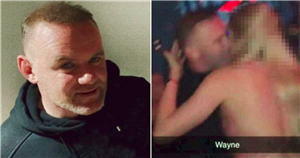 Wayne Rooney has attracted mass attention over the weekend.

The former England captain, 35, had just managed his side in a pre-season defeat to Salford City on Saturday before heading out for some clubbing with friends where he met three 21-year-old women.

Over the next day, pictures emerged of the Derby County manager accompanied by blondes in a hotel which have since gone viral.

The saga has involved everything from shocking selfies, police investigations and a beach holiday.

With so much happening in such a limited time, Daily Star Sport has broken down what occurred before and after Rooney’s night out in Manchester.

Rooney and Derby County take a trip to Salford City’s Peninsula Stadium, Greater Manchester, for a pre-season match before losing out to the League Two side 2-1.

The Rams lose their second game of pre-season amid a dismal start to the summer, with only nine senior players having been registered due to financial problems and an EFL embargo.

The Championship manager decides to take his mind off the underwhelming defeat with a trip into Manchester city centre with friends.

He is given a VIP booth at the exclusive Chinawhite nightclub located in the city.

Also in the nightclub is Snapchat model Tayler Ryan, alongside her friends Elise Melvin and Brooke Morgan, who are out celebrating a 21st birthday.

Friends Elie Melvin and Brooke Morgan, all 21, were also snapped although there is no suggestion the trio were aware of any alleged criminal activity, or have been accused of it.

According to a friend of the girls, they proceed to dance around with Rooney and his friends while posting pictures on their Snapchats.

Chinawhite closes its doors as Rooney and other attendees head out into Manchester’s empty streets.

The record Manchester United and England scorer is then filmed by a fan walking back towards the Staycity hotel along with Tayler Ryan and another blonde.

Rooney can clearly be seen talking to the United fan with his hood up as the two girls walk behind him in dresses and high-heels.

Snapchat videos and pictures showing Rooney in the room alongside the girls begin to circulate on social media early Sunday morning.

The photos go viral and appear to show Rooney gradually falling asleep in his chair as the girls take selfies and snap him with jokey captions like: “Sleepy Wayne.”

In another image, a semi-naked woman poses with her bottom in his direction with the picture captioned: "Mooney Rooney."

He then allegedly hurries off after waking up by catching a lift from a friend.

Meanwhile, the three girls are spotted later leaving Staycity at around 12:30pm.

Rooney is pictured at Derby County’s training complex after a rough night out, conducting a training session and talking to staff while wearing a black cap.

Behind closed doors, the England ace is reportedly spoken to by club officials regarding the events that transpired over the weekend.

The club is yet to comment on the matter.

Coleen Rooney is spotted on holiday at a beach in Abersoch, Wales, as her husband trends on social media.

She is joined by the couple's children Kai, Klay, Kit and Cass, along with her parents on the Llyn Peninsular, where she wears large shades and a leopard print top.

In a bizarre state of affairs, the manager joins in with the training session to make up for Derby's lack-of players but ends up hurting the 20-year-old midfielder in a 50/50 challenge.

Knight is confirmed to be out for up to 12 weeks with an ankle injury as Rooney informs the press without going into the cause of injury.

News emerges from a source speaking to The Sun that Coleen is ‘fully behind' Wayne after they held talks over the hotel pics.

Coleen is reportedly a firm believer that her husband was 'the victim of a stitch up' and the couple remain 'rock solid'.

Meanwhile, Rooney has lodged a complaint to the police where he allegedly claimed he was blackmailed over the images of himself and the three women.