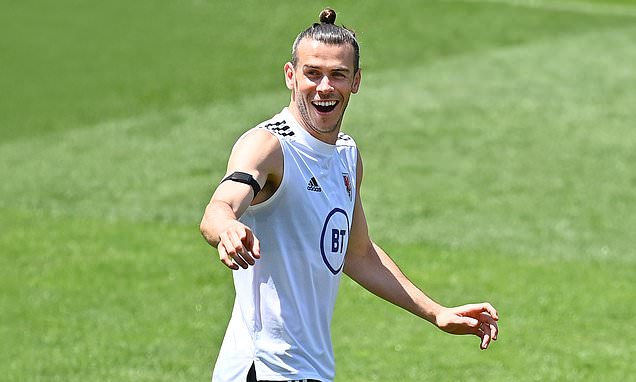 Baku of beyond! Wales were the fans’ favourites five years ago… but now ahead of Euro 2020 they are in Azerbaijan – where everyone is a devout Turkey supporter!

It is very different this time. On France’s Brittany coast five years ago, the locals took Wales so much to heart that the team felt like they were based in Pembrokeshire.

The entrance to the training base in Baku is decorated with Cymru livery — along with the flag of Turkey, next week’s opponents.

Everyone is being very polite about it. The players have been observing all week how pleasant the weather is. But Wales have been dealt an uphill challenge by being dumped in the tournament’s eastern outpost: a city of searing heat, bordering Iran, where every local is a devout Turkey fan. 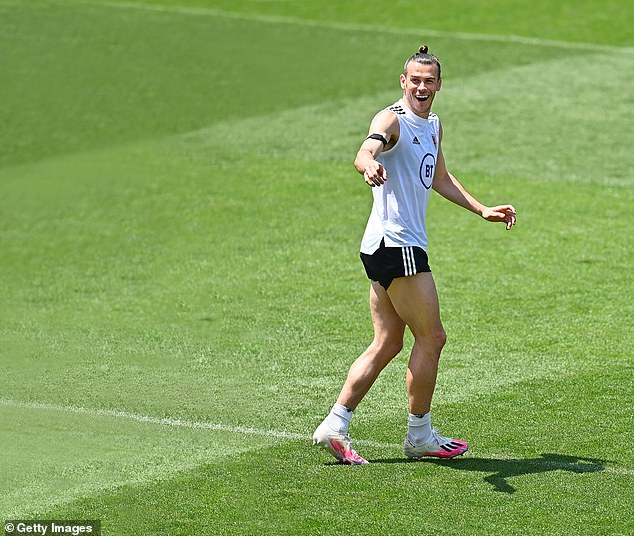 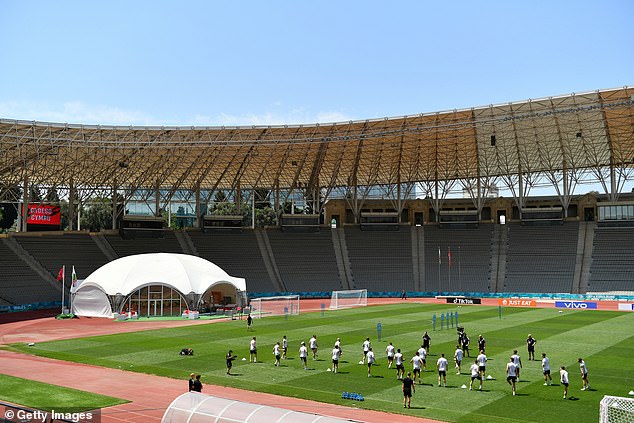 The fact Wales twice missed out in bids to host Euro 2020 matches — Wembley received extra fixtures instead of Cardiff getting a piece of the action when Belgium’s stadium was not ready on time — would have been easier to bear had the geopolitics of their Euro 2020 base not been so unfavourable.

Turkey, who meet the Welsh here on Wednesday, is so inextricably bound up with Azerbaijan that the two countries effectively speak the same language.

The bond was strengthened when Turkish military power ensured Azerbaijan won the brief but bitter war with Armenia over the disputed territory of Nagorno-Karabakh last year.

‘There were demonstrations and protests in Istanbul in support of Azerbaijan during the war,’ says Turkish journalist Ozan Kose, here to cover the country’s group games against Wales and Switzerland in Baku.

‘Turkish president Recep Tayyip Erdogan and soldiers from our army were here in Baku in a gesture of support. It means that Turkey’s games here are home games.’ 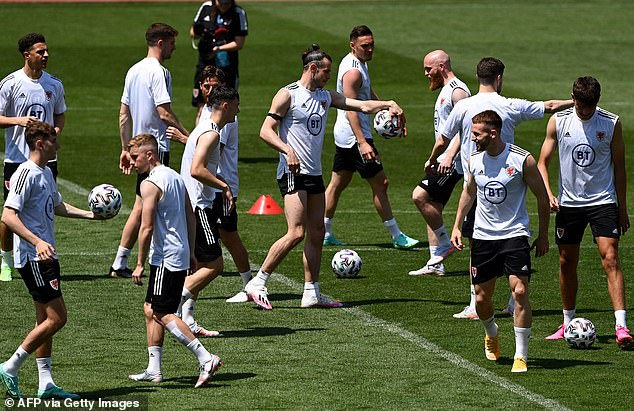 To reinforce the point, the Azerbaijan government lifted a ban on flights from Turkey on Thursday for all who are fully vaccinated.

It means that thousands of Turks will fly here for matches. The vast majority of the 31,000 seats at the Wales game could be taken by Turkey fanatics.

How Azerbaijan managed to get in on the festival when Wales did not is unfathomable, given there is minimal sense that this place is a part of Euro 2020 at all.

One Georgian restaurant in the centre, Mama Jan, seems to have got the message and branded up. But visitors are greeted by the flag of St George.

There are a few sections of street signage and a tacky plastic football ‘sculpture’ in central Fountains Square. Shirts from the competing nations fly above Kucesi Street but one of the Wales jerseys has become caught in the wind. The badge is not visible. 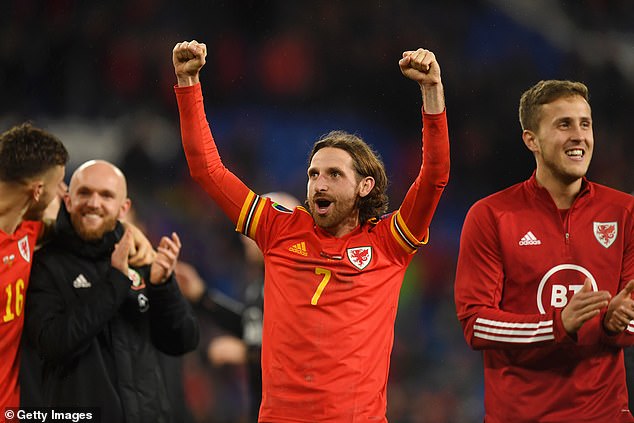 The worry is whether Joe Allen, the heartbeat of the 2016 side, will be able to drive the country forward

This is the way that money talks in sport. Azerbaijan is a petro-state with so much wealth that Baku has staged everything from the Europa League final and the Islamic Solidarity Games to the Formula One Grand Prix, which was contested through the city streets last weekend. Many see these events as the country’s attempt to deflect criticism from its poor human rights record.

The worry is whether Joe Allen, the heartbeat of the 2016 side, will be able to drive the country forward and still repel Switzerland’s Xherdan Shaqiri in 25oC temperatures on Saturday.

Wales being Wales, though, fans’ hopes are undimmed. The FA of Wales had to ask fans not to be here, in line with the Welsh government, but the first trickle of anything between 200 and 600 of them began on Thursday.

Among them were Andrew Jamieson, from Wrexham, who watched Wales’ heart-breaking World Cup qualification defeat by Scotland at Anfield in 1977, and his friend Tim Evans, from Cardiff, here with his wife Lucy. ‘We’ve been asking ourselves all along what would be the chances we’d make it,’ said Evans.

‘We’ve had flights via Istanbul and Riga cancelled and came through Kiev in the end. But we’ve been watching Wales for 50 years. We had to come. We’ve been looking at all the websites to make sure it’s safe — hoping it wouldn’t go on the red list to prevent us coming.’ 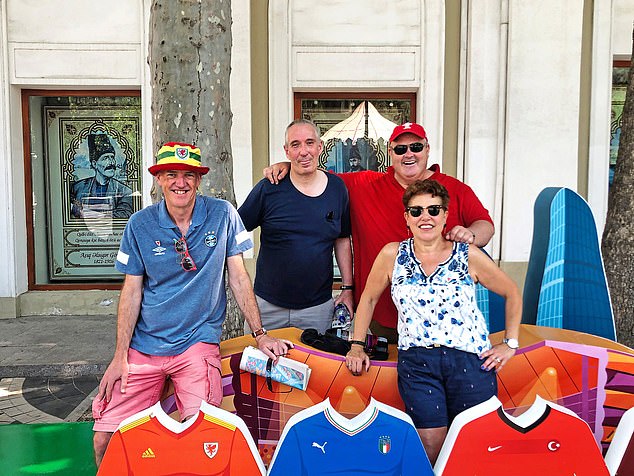 Wales being Wales, though, fans’ hopes are undimmed, the first trickle of anything between 200 and 600 of them began on Thursday

Jamieson said the surroundings made it worthwhile. ‘We need three points to get out of the group,’ he reflected as they posed for pictures behind some more Euro 2020 messaging.

The so-called ‘Wonky Sheep’ group was arriving on a charter flight from Cardiff on Thursday night, while a contingent has arrived via Kiev from Gol Cymru, the supporters’ charity which provides gifts to children’s charities in every country where they follow Wales.

A local football team will play against a Wales supporters’ team at the local Bayil Stadium on Sunday, by which time the travelling contingent hope Wales will have points on the board.

Search hard enough and you might just find the occasional local Wales fan. Hearing the country’s name, a waiter at the Park Inn hotel reaches for his phone and plays a clip of Wales supporters in the bar on their trip here to see a 2-0 win over Azerbaijan in a Euro 2020 qualifier, two years ago. A barman grinning into the camera wears a Bale shirt. ‘Please don’t take me home,’ is the supporters’ chosen anthem.

They all live in hope but it is hard to see them feeling the same way this time.

June 10, 2021 Soccer Comments Off on Wales are the fans' favourite in Azerbaijan ahead of Euro 2020
NFL News