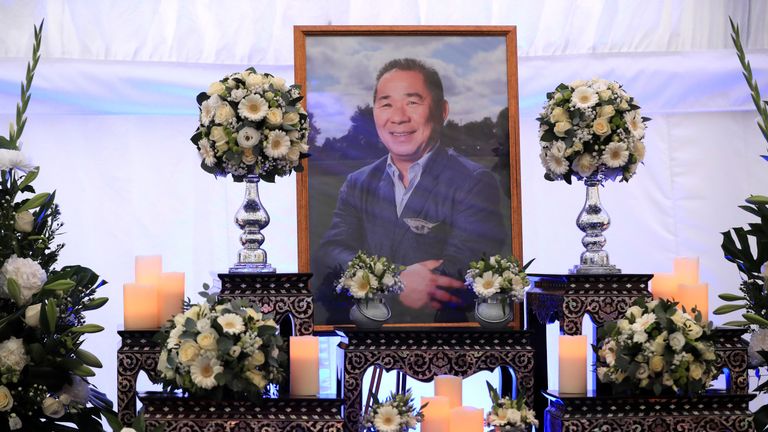 The body of late Leicester owner Vichai Srivaddhanaprabha has arrived in at the Buddhist Temple in Bangkok, where his funeral will begin on Saturday.

The 60-year-old died on Saturday, along with four others, when his helicopter crashed after taking off from the King Power Stadium.

It is understood his close family and friends, including son Aiyawatt and widow Aimon, are also in Bangkok.

Leicester striker Jamie Vardy told Sky Sports News he and his team-mates will travel to Thailand for the funeral.

“It will be massively important,” Vardy said when asked if players will attend the funeral. “That’s how we are – we are a close-knit group. We are one big family and one of the main reasons for that is Vichai – for us to be there is massively important.”

In keeping with Buddhist tradition the funeral will last seven days, and in recognition of Khun Vichai’s status within the country, the ceremony has been granted “Royal sponsorship” with all the associated honours.

Leicester will travel by road to Cardiff for their Premier League match on Saturday, after deciding it would be insensitive to fly, given the circumstances of the death of their owner.

Claude Puel says the outcome of the match is irrelevant, with the sole focus on honouring Khun Vichai.

Speaking ahead of the visit to Cardiff, Puel said: “The game is not important, the result is not important but our desire, our action, our power to give our best on the pitch, to honour our chairman – I think is the most important thing.”