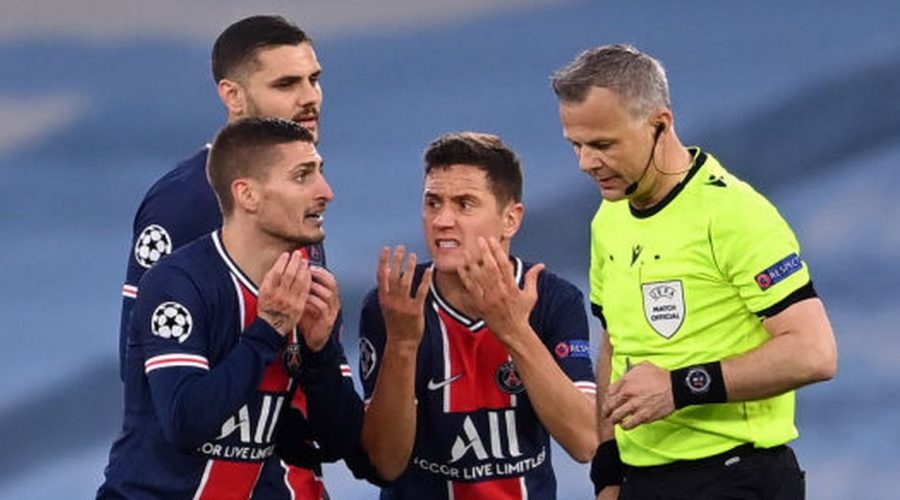 Dutchman Bjorn Kuipers will be the man in the middle for tonight's crunch Euro 2020 final between England and Italy, and Kuipers has a history with Italy's star midfielder Marco Verratti.

Kuipers will be joined by a team of officials originating from the Netherlands, Spain, and Germany.

However, back in May, Kuipers was at the centre of controversy following the Champions League semi-final second leg clash between Manchester City and PSG, in which the English side came out on top.

And, Verratti – who had featured in the match – made some startling claims about the Dutchman following the full-time whistle in Manchester.

"He [Kuipers] said 'f*** you' to me. I talk to referees a lot but I never say that or I get a 10-game ban," Verratti vented to the press following the Parisians elimination from the tournament.

And, his claim was backed up by midfielder partner Ander Herrera: "We talk about respect with referees.

"The referee tonight said 'f*** off' to Leandro Paredes. It's incredible. If we say that we get a three-four match ban."

The altercation emerged after Angle Di Maria was given his marching orders for a reckless challenge on Fernandinho, a decision that was met with wild protests from the PSG players.

Verratti is expected to start against Gareth Southgate's Three Lions tonight, and he started the last four fixtures for Roberto Mancini's men.

Italy haven't tasted silverware since they lifted the 2006 World Cup; England, on the other hand, have to go way back to 1966 to remember the taste of victory.