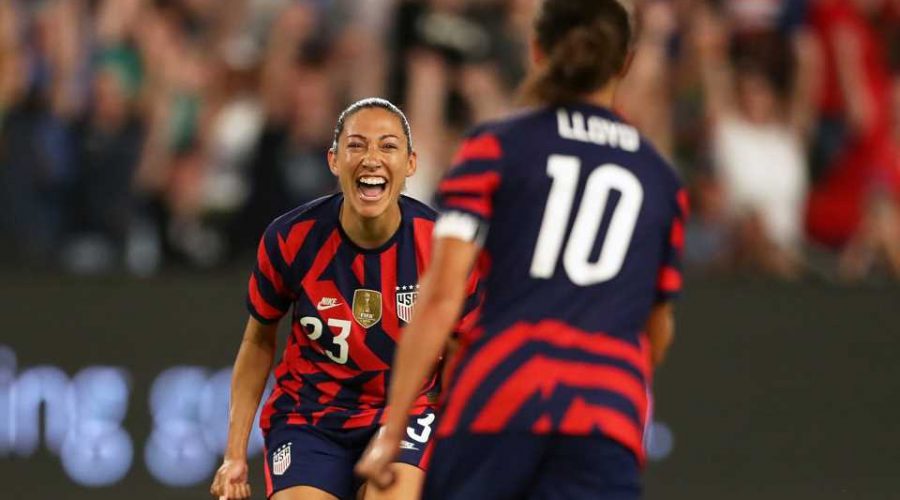 The Olympics will begin to feel real for the U.S. women’s national soccer team beginning with Thursday’s match against Mexico, the first of two final tuneup games before the flight to Tokyo.

All 18 players on the USWNT’s Olympic roster will be eager to show head coach Vlatko Andonovski that they deserve the start in the Olympic group-stage opener against longtime foe Sweden on July 21.

And fans and opponents will be looking for any hints as to what that first starting XI might look like. All eyes will also be on Tobin Heath and whether she sees minutes against Mexico, given she has recently recovered from injury. The other player on the roster who is still on the mend, Julie Ertz, is not on the matchday roster.

How to watch USWNT vs. Mexico

The U.S. Women’s National Team hosts Mexico at Pratt & Whitney Stadium at Rentschler Field in East Hartford, Conn. The match will be broadcast on FS1, UniMas and TUDN with all three networks available via fuboTV (free 7-day trial).

What to expect from USWNT vs. Mexico

Andonovski explained why the USWNT organized two matches against 28th-ranked Mexico as his team’s final preps.

“I think [Mexico] have great quality and they’re trending upwards in terms of the way they play,” Andonovski told media. “They also have great individuals that have quality to break teams down on an individual basis. They’re very organized and super competitive. Especially when we play each other, the game always gets a little more competitive. And that’s the type of game we want to play leading up to the Olympics.”

Beyond general fine-tuning, Andonovski also plans to use the friendly to spring a few in-game tactical surprises on his players to see how quickly they can adjust. It’s the kind of thing a team this good has to do to feel challenged.

Here’s how dominant the U.S. women have been of late: The USWNT enters the matches against Mexico on a 42-game unbeaten streak (38-0-4), the third-longest in U.S. history and just nine games shy of the USA’s all-time record. The team has been even more impressive on U.S. soil, with an 18-game home winning streak and a 56-game home unbeaten streak (51-0-5).

Mexico, which did not qualify for the Olympics, will look to use these matches to make continued progress. Boosted by the growing success of its domestic league, the Liga MX Femenil, Mexico will feature eight players from champions Tigres UANL, three U.S.-based college players and two players who ply their trade in NWSL.

The formula for Mexico, coached by former La Tri player Monica Vergara, will be straightforward: defensive organization, quick transitions and hope that its skillful attackers can hit the U.S. on the break.

Despite the respect shown by Andonovski in the lead-up to the match, the USA has routinely defeated Mexico comfortably.

In their three most recent meetings, the U.S. has won by a combined 13-0. Mexico also conceded five goals to Japan in its most recent friendly on June 13.

The USWNT are such lopsided favorites that DraftKings doesn’t even offer odds for an outright U.S. win. It’s easy to understand why: In 39 all-time matches against La Tri, the USA is 37-1-1 with the one loss coming in 2010.

Depending on whether you feel that another five-spot is in the cards against Mexico, you can either play “over 4.5 goals scored by the USA” or the “under 4.5 total goals” in the match if you think Mexico can successfully frustrate the U.S. attack.