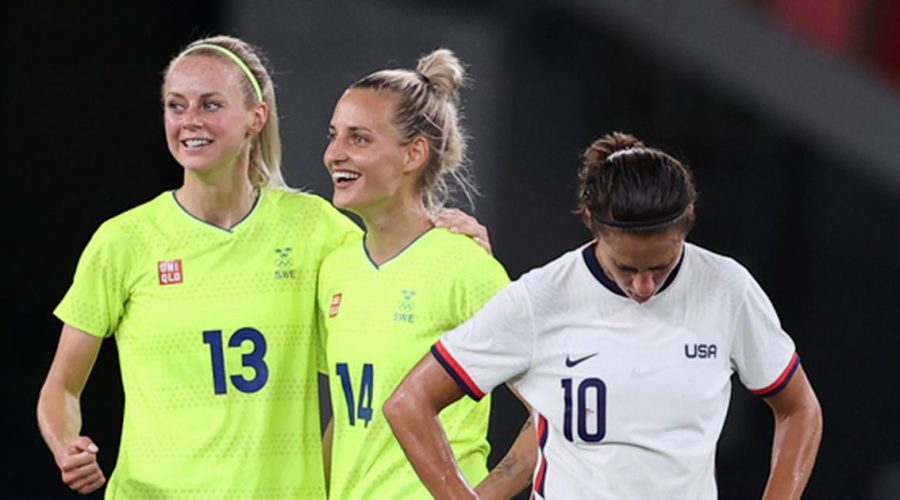 The world champions were downed 3-0 by the Scandinavian side as they suffered their first defeat under boss Vlatko Andonovski, who had guided them to 2 victories in his 23 games at the helm.

Striker Stina Blackstenius netted either side of half-time before Lina Hurtig added a third goal in the 72 nd minute to finish the game as a contest.

It was a first defeat for the U.S. – who were overwhelming favourites to win the gold medal in Tokyo – since a friendly against France back in January 2019.

However, their pursuit of this year’s title suffered a huge blow against the side who eliminated them from the 2016 Olympics.

That was a quarter-final encounter when the Swedes won a penalty shootout following a 1-1 draw and was the shock of the tournament, but the margin of victory on Wednesday was significantly more convincing.

The comprehensive nature of the victory was underlined by USWNT goalkeeper Alyssa Naeher arguably being her side’s top performer with a string of fine saves throughout.

This was the first competitive defeat for the U.S. since their 2016 elimination by the same opposition, and they romped to the 2019 World Cup title with a perfect winning record.

Andonovski’s side were unlucky not to get on the scoresheet themselves – twice they hit the post while Sweden goalkeeper Hedvig Lindahl produced an important save from Carli Lloyd.

The U.S. next face rank outsiders New Zealand in the group and are likely to rotate heavily, Chicago Red Stars midfielder Julie Ertz set to be among those recalled to the starting line-up.

Can Team GB win gold at the Olympics in women's football? Comment below

But this defeat felt hugely significant, with the players talking up this tournament as something that they had been waiting five years for since their disappointment in Rio.

Defender Kelly O’Hara said ahead of the game: “It feels like a big deal.

“It feels like the Olympics. It’s what we’ve waited now five years for, to be back here.”

Megan Rapinoe – one of a host of stars to be introduced in the second half – added after the game: "It is what it is. We got bopped, and we have two more games coming quick and fast.

“And now we know exactly what we need to do. We need to win these games and eventually get out of the group and go from there.

“I thought we were a little tight, a little nervous, just doing dumb stuff.

“You drop points in the beginning of a tournament, you’re in do-or-die mode.”

Rapinoe added that she wanted “to put a mirror in front of everyone and say: ‘Relax. We’re good.’”

Forward Christen Press acknowledged the defeat: “It’s going to be a hard tournament.

“We knew it was going to be a hard tournament.”

Meanwhile, defender Becky Sauerbrunn described it as a “bad night” and said: “We’ve got a lot of work ahead of us.”