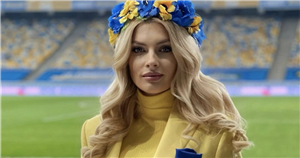 Oleksandr Zinchenko's wife Vlada has been soaking up the atmosphere in Rome ahead of Ukraine's Euro 2020 showdown with England on Saturday night.

Zinchenko and co are set to go head to head with the Three Lions at the Stadio Olimpico for a place in the semi-finals of this summer's major tournament.

Ukraine are bidding to reach the last four of a major tournament for the first time since breaking away from the Soviet Union in 1991, meaning Saturday's clash is one of the biggest in their history.

And ahead of the big night, Vlada Zinchenko has travelled out to Rome to watch her man in action. The glamorous blonde, who works as a TV presenter and a journalist, shared videos on her Instagram story of the streets of Rome on Friday night as Italy faced Belgium in one of the other quarter-final matches.

She got herself right in the thick of the atmosphere as Italy fans watched the game on a big screen at Piazza Del Popolo.

Do you think England will beat Ukraine? Let us know in the comments section below. Man City ace Zinchenko first confirmed his relationship Vlada in June 2019, when he planted a kiss on her cheek while she was covering Ukraine's 5-0 win over Serbia.

He then embraced his stunning partner after the country's victory over Portugal in October 2019, which secured their qualification for Euro 2020 this summer.

The left-back married Vlada in August 2020, one year after he proposed inside the 70,000-capacity Olympic Stadium in Kiev with a heart-shaped display of red roses.

Zinchenko's wife reports for Channel Football 1/2 and has interviewed the likes of Ballon d'Or legend Cristiano Ronaldo and Ukraine boss Andriy Shevchenko in the past.

She once made headlines following City's defeat against Lyon in the 2020 Champions League quarter-finals, reacting furiously after her husband was left on the bench.

The 25-year-old said: "Perhaps I have no right to say this, perhaps Zinchenko will forbid me. But to put it mildly, and in order not to swear, this is completely Guardiola's fault."