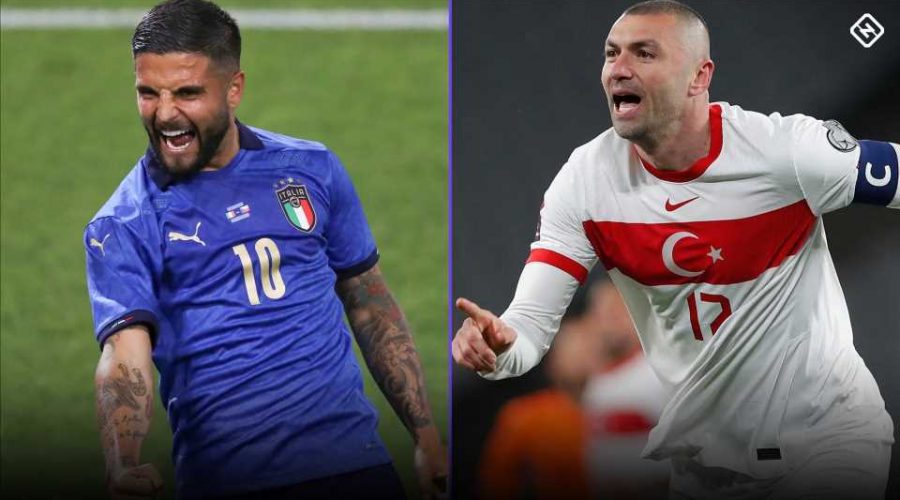 All eyes will be on the Euro 2021 tournament opener on June 11: The Group A match between Italy and Turkey at Rome’s Stadio Olimpico is the lone match on tap for the day.

Italy is one of the favorites to hoist the trophy on July 11 and they’re on a sensational unbeaten run of 27 straight matches. The Italians are playing well and they will have a chip on their shoulders after failing to qualify for the 2018 FIFA World Cup.

The Turkish team is talented in its own right, with players featuring for some of the top teams across Europe. The Turks had a strong Euro qualifying campaign, in which they proved they can be just as explosive and defensively stingy as the Italians.

A crowd of 14,000 fans will provide the backdrop for the match and will include over 2,000 Turkish supporters.

Here’s the full schedule of Euro 2021 games today and tomorrow.

The ABC and ESPN networks will provide English-language coverage of the tournament with half-hour pregame shows. In addition to daily studio programming and simulcasts of the semis and final, ESPN+ will carry a multi-feed second-screen experience for every game (aerial cam and two team cams).

Univision will handle Spanish-language coverage of the tournament via its free streaming platform PrendeTV (40 matches) and Univision and TUDN linear channels (11 matches).

You can watch all the ABC and ESPN coverage on fuboTV (free 7-day trial).

It wouldn’t be a major tournament without an opening ceremony.

The 15-minute pregame celebration will feature dancers, percussionists and, of course, world-famous Italian tenor Andrea Bocelli. There will also be a performance of the official Euro 2021 anthem “We Are The People” by U2.

Manager Roberto Mancini has Italy humming and did nothing to hide his expectation that Italy can advance to the final and put on a show along the way. The Azzurri were perfect during Euro qualifying (10-0-0) and they’re perfect so far this year (5-0-0), having not allowed a single goal in 2021.

Although they’ll be missing two key contributors to injury, the Italians are always a threat at the major competitions. And the fact that they’re playing all three group games on Italian soil should give them an edge. Italy has only won the Euros once in team history (1968) although the team has most recently advanced to the Euro final in 2000 and 2012.

The history of the matchup favors Italy, which is undefeated in 10 all-time matches against Turkey (7-0-3), but the countries haven’t faced off since a 2006 friendly. And you just never know which Turkish side will show up. The Turks can tie Latvia (3-3 in March) or they can handily beat a world power like the Netherlands (4-2, also in March).

The Italians have an up-and-coming core of young talent led by goalkeeper Gianluigi Donnarumma, who’s reportedly getting set to sign a big contract with PSG in France. Turkey’s top players include forward Burak Yilmaz, who just won a league title with Lille in France alongside his Turkish compatriot and playmaker Yusuf Yazici. Three of the Turkish squad players ply their trade in Italy’s Serie A and will be familiar with the opposition.

Italy is the clear favorite in this one, but you’ll have to dig hard for value. At time of publication, the Italy -1.25 Asian handicap offers the best risk/reward at +128.

The Azzurri have shown they’re capable of scoring at will and keeping it tight in the back. But the opening match of any international tournament is rarely a goalfest, no matter how good the teams are.

Plus, goal differential (goals scored minus goals allowed) is a tiebreaker in the final group standings. So Turkey will not be reckless in searching to overturn a negative result even if the Turks concede a goal to Italy.