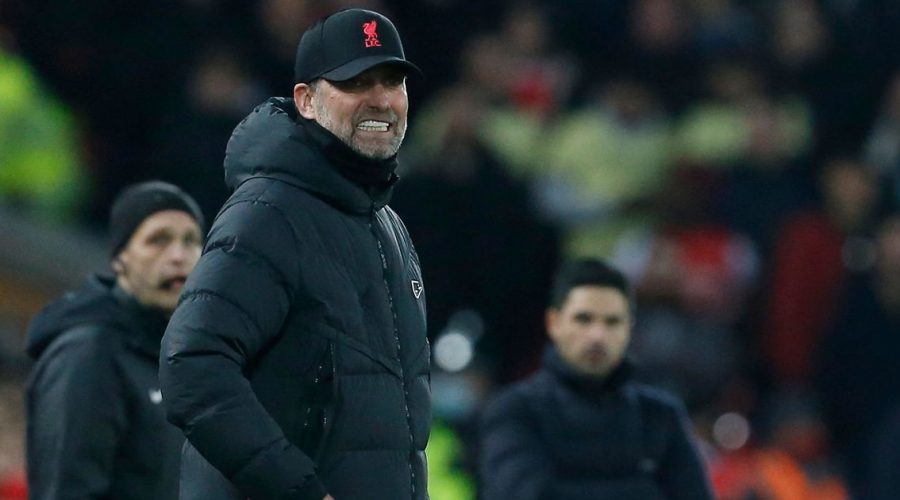 Chelsea fans remain clueless as to who they will play in the Carabao Cup final as Liverpool and Arsenal played out a bore draw in the first leg of their semi-final.

After an opening 24 minutes of domination by Liverpool, they were handed the advantage when Granit Xhaka was sent off after bringing down Diogo Jota as he looked to race through on goal.

But for all their possession and numerical advantage, Jurgen Klopp’s side couldn’t break the deadlock and thus travel to the Emirates Stadium later this month hoping that the North London outfit do not capitalise on their home advantage.

Takumi Minamino had the chance to land the spoils late on but smashed his strike over the bar after Aaron Ramsdale had failed to punch clear a cross and left his goal vacant.

So, what went well for Klopp and what didn’t?

Things he got right

English right-back Trent Alexander-Arnold only returned to training earlier this week having suffered from Covid and it looked doubtful that the defender would be thrown in for the match against the Gunners.

However, Klopp’s decision paid off.

The 23-year-old provided width to the Reds’ play and was an everpresent threat when he was in possession out wide, whipping teasing crosses into the penalty area.

One of Alexander-Arnold’s greatest strengths is his attacking ability, so when Xhaka was dismissed it meant that the academy product was relieved of a lot of his defensive duties and thus thrived.

The fullback was replaced by Neco Williams with 14 minutes left on the clock and his display suggested he will be more than ready to take on Brentford on Sunday.

Klopp handed Alisson his first-ever start in the Carabao Cup on Thursday night, with Adrian and Caoimhin Kelleher starting between the sticks previously.

But the Brazilian provided an aura of confidence at Anfield, coming to claim crosses and fuelling attacks from inside his own penalty area.

The goalkeeper was called into action rarely in the game but when Mikel Arteta’s side rallied in the second half, he was there to protect his clean sheet, pulling off a masterful save to deny Bukayo Saka.

Things he got wrong

The Liverpool midfield has been at the heart of their issues this season, and it was no different on Thursday night.

The trio of James Milner (later replaced by Curtis Jones), Fabinho and Jordan Henderson are all largely defensive-minded, and it meant that the Reds’ forward line really struggled as a result.

When space opened up, there were no runners from deep both in possession or whilst trying to latch on to a cross and thus it gave the makeshift Arsenal defence little to worry about in whole.

Of course, the injuries to more forward-thinking playmakers like Thiago Alcantara and Harvey Elliott must be considered, but it is hard to see why it took Klopp until the 75-minute mark to realise that there was no creativity in the centre of the park and bring on Alex Oxlade-Chamberlain.

The January transfer window provides Klopp with the opportunity to strengthen his options in regards to no.10’s, but it remains to be seen whether the former Borussia Dortmund boss chooses to do so or puts his faith in the current midfield options he already has.

Despite being almost full strength – asides from the obvious absences of Mohamed Salah and Sadio Mane – Liverpool could not break down the ten men of Arsenal.

Klopp's side lacked ideas and struggled to apply consistent pressure to Arteta's weakened backline, may that be due to misplaced passes or simply a lack of options in the final third.

The midfield, as mentioned, didn't help matters but the frontline struggled to link up with the fullbacks of Alexander-Arnold and Andrew Robertson and thus the pair struggled to prove as effective as they couldn't make their way down the wing to the byline.

For a team of Liverpool's strength, they should have put this match to bed considering they had an hour with a numerical advantage and thus could have rested a few players for the return meeting, but instead Klopp will have to do the opposite.

January 13, 2022 Soccer Comments Off on Two things Klopp got right and two he got wrong as Liverpool draw with Arsenal
NFL News