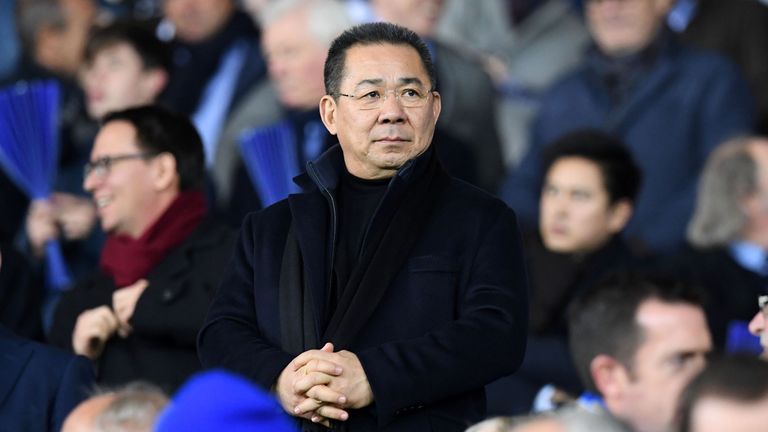 Tributes have been paid to Leicester City chairman Vichai Srivaddhanaprabha after it was confirmed he died in a helicopter crash outside the King Power Stadium on Saturday.

The 60-year-old Thai businessman was one of five people killed when his helicopter lost control and crashed in a car park following Saturday’s 1-1 draw against West Ham.

Under Srivaddhanaprabha’s ownership, Leicester secured promotion to the top-flight in 2014 and, against odds of 5,000-1, won the 2015/16 Premier League title.

Striker Jamie Vardy, who scored 24 Premier League goals in the season Leicester won the title, was among the first of the club’s players to pay tribute to Srivaddhanaprabha.

He wrote on Instagram: “Struggling to find the right words….but to me you are legend, an incredible man who had the biggest heart, the soul of Leicester City Football Club.

Struggling to find the right words….but to me you are legend, an incredible man who had the biggest heart, the soul of Leicester City Football Club. Thank you for everything you did for me, my family and our club. I will truly miss you…. may you rest in peace…#theboss

Struggling to find the right words….but to me you are legend, an incredible man who had the biggest heart, the soul of Leicester City Football Club. Thank you for everything you did for me, my family and our club. I will truly miss you…. may you rest in peace…#theboss

“Thank you for everything you did for me, my family and our club. I will truly miss you…. may you rest in peace.”

Words can’t describe how I feel. A truly great, kind, loving man who will be missed so much by everyone.

I will never forget the Chairman’s support, not only during my time @LCFC but also during the World Cup ? RIP ❤ #TheBoss pic.twitter.com/66aGjGGwX9

Leicester captain Wes Morgan wrote on Twitter: “Absolutely heartbroken and devastated regarding the news of our chairman.

RIP Boss. You were a great person who cared so much about our club, city and everything which came with it. Thank you for enabling us to make our dreams a reality and I hope you were as proud of your club as we were of you. We will miss you ??? pic.twitter.com/Chc2OfFaO2

“A man that was loved and adored by everyone here at LCFC and someone who I personally had the utmost respect for.”

Everyone at #MUFC is deeply saddened to learn that the Leicester City chairman and four fellow passengers have lost their lives following last night's tragic incident. Our deepest condolences are with their families, friends and those connected to the club.

He wrote on Twitter: “RIP to the greatest ever owner of @LCFC. It was a privilege to have met him and condolences to the families who lost their loved ones in last night’s tragedy.”

The Premier League’s executive chairman Peter Scudamore said in a statement: “My Premier League colleagues and I are devastated to learn that Leicester City FC Chairman Vichai Srivaddhanaprabha and four other people lost their lives in the helicopter crash outside King Power Stadium last night.

A truly sad day for football. My thoughts and prayers are with the family and friends of those who tragically passed away. #LCFC

“Our deepest condolences and heartfelt thoughts go to the Srivaddhanaprabha family and all the relatives and friends of those involved in this tragic accident.

Our thoughts are with the whole @lcfc family. Rest in peace https://t.co/1lfHzRrBuP

“Vichai was a gentleman who graced the game with his civility and charm and we will miss him enormously. His impact on Leicester – the football club and city – will be remembered forever.”

Sky Sports managing director Barney Francis said: “This is a shocking and tragic event. As we try to come to terms with this awful news our hearts go out to the family of Vichai Srivaddhanaprabha and everyone connected to Leicester City football club.”

Nick Saban, Jimbo Fisher and the perfect college football feud for its time