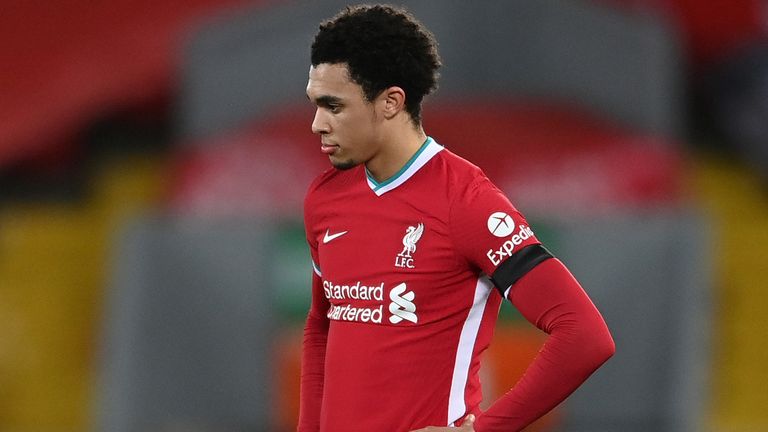 Trent Alexander-Arnold set the bar too high for himself and the reason for the right-back’s loss of form is “only confidence”, says Glen Johnson.

Alexander-Arnold followed an impressive all-round display against Arsenal on Saturday with an indifferent performance against Real Madrid on Tuesday night to continue the inconsistent form which saw him miss out on a place in Gareth Southgate’s squad for World Cup Qualifiers against San Marino, Albania and Poland.

Former Liverpool defender Johnson says the 22-year-old is struggling to meet his own high standards from seasons gone by, and has backed Alexander-Arnold to return to the form which won him 12 senior caps for his country.

“For me, it’s only confidence,” Johnson told Sky Sports. “He’s a fantastic player and people forget how young he is. The problem for Trent is he’s set the bar so high in recent seasons that people expect it now.

“He’ll bounce back but if you make half a mistake at this level you are going to get punished.”

Gary Neville and Jamie Carragher shared a heated debate on Monday Night Football over whether Alexander-Arnold should be picked for this summer’s Euros, but for Johnson there is no doubt he should be in the squad.

“He definitely makes it,” Johnson said. “Whether he’d be the number one right now I’m not so sure.

“If you don’t take him, you miss out on massive amount of potential. If you get him smiling and enjoying his football then he’s the best.

“If you leave him out you are going to destroy his confidence. If we can get back 90 per cent of the Trent we know then he’ll be starting.

“Sometimes at England we’ve been limited for options but now to have four or five, with two real class right-backs, it’s good to watch them battle it out and to have that competition is healthy.

“Winning the race, for me, at the moment is Trent and Reece James.” 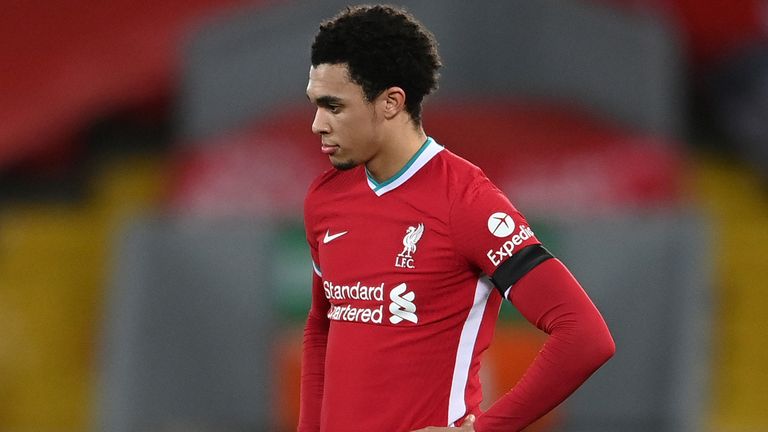 Renewed confidence in Liverpool’s defence has been shattered after being exposed in defeat to Real Madrid, writes Adam Bate…

It seems strange even to think it now but this Liverpool back four had started together on four occasions prior to this Champions League defeat to Real Madrid and had not so much as conceded a goal. Any confidence that had been rebuilt in those games was shattered as the 13-time European champions cut through Jurgen Klopp’s team in the Spanish capital.

It is difficult to think of a more hapless half of football by Klopp’s Liverpool in Europe. The opening 45 minutes of their 3-1 defeat to Real Madrid in the first leg of this Champions League quarter-final were wretched. Passes went astray, players were caught up the field and static defenders were outmanoeuvred with ease by Vinicius Junior and the rest. 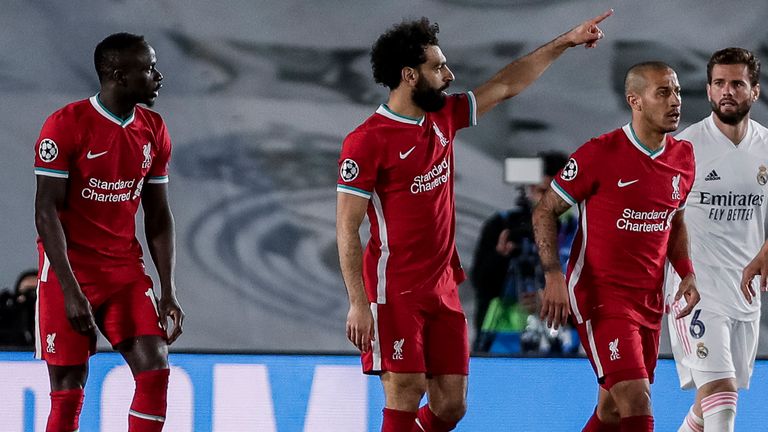 Liverpool are not out of the competition yet. Mohamed Salah’s away goal is enough to provide some hope. But the sense is of an opportunity squandered. A chance to salvage the biggest trophy of them all from this most difficult of seasons is slipping from their grasp. The draw had been kind but it was nowhere near as generous as Liverpool’s defenders.

The irony is that it was Real Madrid not Liverpool who should have been most rocked by key absences at the heart of their back-line. Shorn of two greats of the game on the eve of the tie, Sergio Ramos and Raphael Varane, both World Cup winners as well as having won this competition four times, the chance was there for Liverpool to really go for Madrid.

That seemed to be in Klopp’s mind with his team selection. The direct running of the in-form Diogo Jota was preferred to Roberto Firmino, while, more controversially, Naby Keita was picked ahead of Thiago Alcantara in midfield. It was a huge call to choose a player whose only previous start since Christmas had come in a home defeat to Fulham. It backfired. 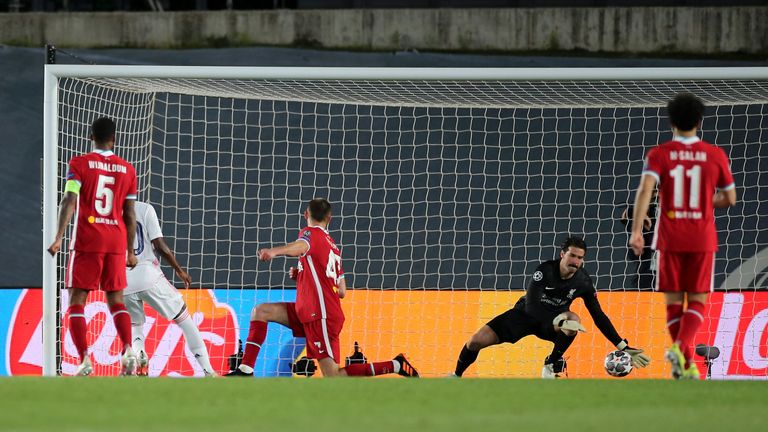 “Naby brings special things,” said Klopp beforehand. “We need dribblers. That is what Naby’s job is tonight.” But Keita was able to cause few problems. The intensity that might have troubled the experienced pairing of Toni Kroos and Luke Modric was absent. Thiago came on for Keita before half-time but by that stage Liverpool were already two down.

Where was the pressing that might have revealed the flaws surely present in what many had regarded as a relatively underwhelming Madrid incarnation? Liverpool had surely been waiting for this. Not exactly conserving energy but mental reserves, aware that only the Champions League offered the opportunity of glory for these players this season.

The problem, perhaps, is that it takes more than the enthusiasm and appetite of the willing Jota to maintain a coherent pressing game. It requires trust in those behind to step up, belief that the movement is coordinated and the space left behind will not be ruthlessly exploited by the quality of the opposition. Any faith was undermined inside that first half.It was alarming how quickly it all unravelled. In the opening minutes, there was a powerful header by Nat Phillips to clear the opening corner of the game. Ozan Kabak swept round confidently on the cover to usher the ball out of play. Liverpool were holding firm.

But then Phillips and Trent Alexander-Arnold began to be exposed, not once but time and time again. Goals flew in. Kabak mistimed a back-pass. Klopp had his head in his hands. Fabinho gave it away in a dangerous area. The half ended with the technically impeccable Thiago attempting an ambitious cross-field pass that was intercepted. It was chaos.

🎯 Mohamed Salah has scored in 4 consecutive European appearances for the first time in his career #UCL pic.twitter.com/o8jkyxwGtZ

Phillips’ limitations should come as no surprise. His lack of pace leaves him vulnerable. It is just that – Callum Wilson aside – nobody has really been able to expose this weakness. Here, in perhaps the biggest game of his career, he was not so fortunate. One short step out of place and Vinicius was able to run in behind and open the scoring for Madrid.

Liverpool might have escaped punishment had Alexander-Arnold been providing some meaningful cover in behind him but the failure of the English pair to deal with the Brazilian was a feature of the game. The first goal was not even the first time that Vinicius had found space in between them. Unfortunately for Alexander-Arnold, nor was it the last.

There was no real excuse for the misdirected header that allowed Marco Asensio to double Madrid’s lead just nine minutes after the opener, but it was in keeping with the shoddiness of Alexander-Arnold’s defensive work for much of the evening. He had already been skinned by Ferland Mendy and allowed a counter-attack with a loose pass inside. It was skittish. 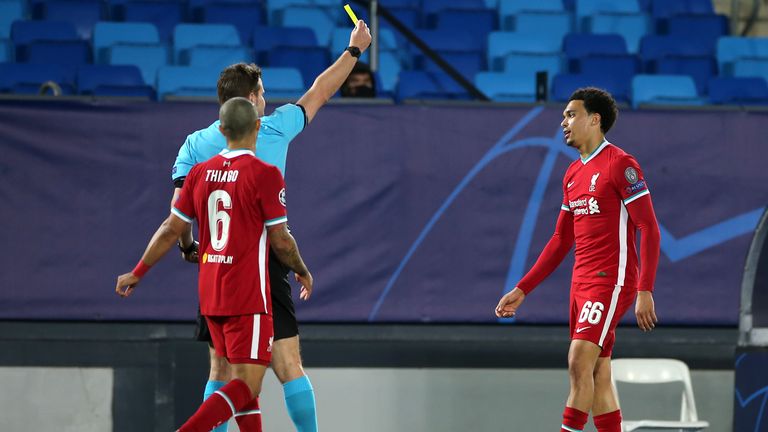 The argument, of course, is that the young right-back offers so much going the other way and there was some evidence of that even in defeat. His long pass to Sadio Mane just seconds before his error should have yielded a Liverpool free-kick on the edge of the Madrid area and perhaps the night would have taken a very different turn if it had been given.

It should also be said that this is a tactical choice to encourage Alexander-Arnold to raid forward and leave the space in behind. But that was not the story of this game. He was in position at the key moments. It was just that he made mistakes when he was there.

In the second half, there was a brief moment when the momentum shifted after Salah’s goal – the result of a trademark driving run by Jota. Alexander-Arnold even drew plaudits for some fine defensive work – a vital block to cut out Asensio’s pass on the counter-attack. 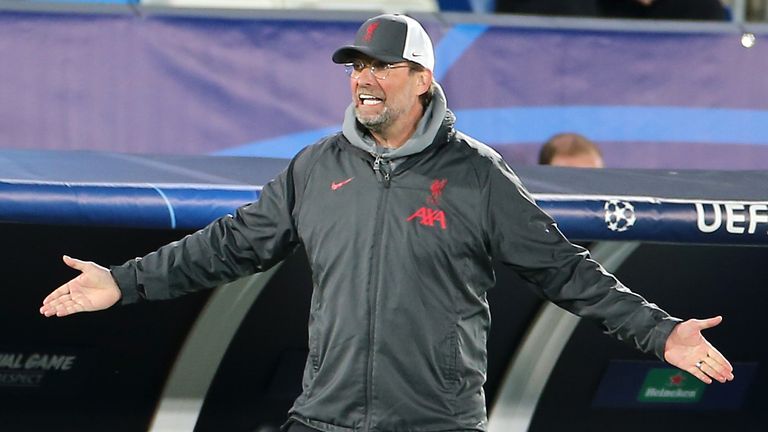 But within moments, Alexander-Arnold was on his heels as that man Vinicius darted away from him and Phillips could not get close enough to produce the block. Madrid’s two-goal advantage was restored and that is the deficit that Liverpool must now overhaul at Anfield.

Do it and glory is just three games away. But for this Liverpool side that seems too much to expect. There is still quality in the team but in key zones of the pitch there is a lack of it too. More often than not, it does not prove costly. On the biggest of stages, these weaknesses are revealed. As Liverpool found out in Madrid, that can sap fledgling belief in no time.