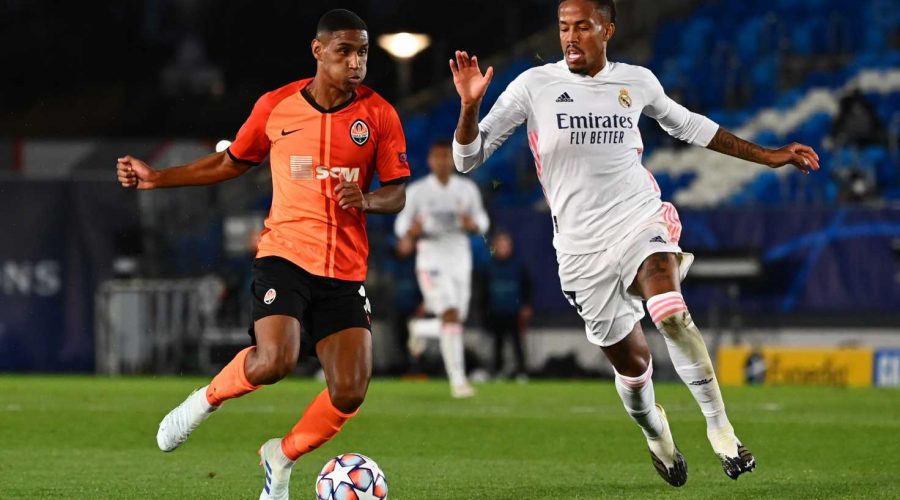 The January transfer window opened last week and clubs are continue to negotiate over potential moves as they look to bolster their squads in what is a chaotic season of coronavirus outbreaks and match postponements.

Tottenham, somewhat surprisingly, look like they could be one of the busiest Premier League clubs this month in terms of transfers, with Jose Mourinho’s side reportedly eyeing a loan move for Real Madrid defender Eder Militao – who is also wanted by AC Milan, inter and Roma – and Nicolas Gonzalez. Spurs face competition from fellow Premier League side Leeds and La Liga outfit Valencia in their pursuit of the Stuttgart winger, however. Interestingly, Valencia are thought to be keen on taking Tottenham midfielder Harry Winks on loan.

Elsewhere in north London, Arsenal have been priced out of a deal for Norwich’s Emi Buendia and so could move for Brighton midfielder Yves Bissouma, though a summer switch appears more likely in this case, with the Seagulls close to securing Moises Caicedo from Independiente del Valle but expected to loan the 19-year-old to either Manchester United or Chelsea. Those powerhouses are also in a race to sign RB Leipzig defender Dayot Upamecano, but Bayern Munich have joined that race.

Follow live updates from the January transfer window below.

Timothy Fosu-Mensah is in advanced discussions with Bayer Leverkusen over a £1.5million move to the German club.

The 23-year-old rejected a new contract offer from Manchester United and has picked up interest from a few clubs on the continent.

Ajax and Hertha Berlin were also interested in the defender but Leverkusen are favourites to sign him.

I’m not sure if he will stay or if he’s going to take an option now. He’s not played enough, so of course he’s been allowed to speak to clubs with a view to leaving now in January.

“It’s difficult when you have good players, talented players, and you can’t give them game-time. He’s now at the stage where he needs to go and play again.

“It might be end of January or in the summer where he finds somewhere else, he’s working hard so he’s ready for a move for any club he feels ready for.”

It was previously reported that Arsenal are interested in signing Norwich midfielder Emiliano Buendia.

Norwich manager Daniel Farke has been vocal in saying that he does not want to let the player go in January and the Canaries have set a £40 million asking fee for his signature in an attempt to ward off interest.

However, according to Italian journalist Fabrizio Romano, that has not put Arsenal off and an official offer could be immiment with Valencia also interested in the 24-year-old.

Buendia has scored seven goals and has made six assists in 19 games in the Championship this season to help Norwich challenge for an immediate return to the Premier League.

Dayot Upamecano could be heading to the Premier League but any such move would only occur over the summer.

The central-defender has been linked with Manchester United and Liverpool but now there is more competition for his signature in the form of Bayern Munich.

Marca are reporting that the Bundesliga champions are interested in the RB Leipzig defender and will make a move for him in the summer window.

For any of the English sides to win his signature they would probably have to meet the €42m release clause.

WINKS ON THE WAY TO SPAIN?

Tottenham are willing to let Harry Winks leave the club on loan this month.

Winks has only made five Premier League starts this season and has struggled to find a place in the first team against competition from Pierre-Emile Hojbjerg, Moussa Sissoko, Tanguy Ndombele and Giovani Lo Celso.

Spanish outlet AS report that talks between Spurs and Valencia over a loan deal are ongoing but may be stalling as Tottenham are requesting a fee for the 24-year-old.

Winks is said to be interested in the move as it would allow him more playing time to push for a spot in Gareth Soutgate’s Euros squad later this summer.

UNITED WALK AWAY FROM CAICEDO TALKS

According to the Manchester Evening News the move for 19-year-old Caicedo, was compromised by the involvement of various intermediaries and it became ‘too messy’ for United to proceed.

However, talkSPORT are saying that a move to the Premier League may still happen for the teenager with Brighton now the frontrunners to sign him.

The Seagulls have agreed a fee with Independiente, while Newcastle United were unsuccessful in their late bid to hijack the move.

Stuttgart winger Nicolas Gonzalez is a player of particular interest. He arrived at the German side in 2018 from Argentinos Juniors but was relegated from the Bundesliga with the club that season.

In the German second tier he has found his form scoring eight times in nine matches post lockdown in the 2019/20 season. Last Sunday he starres in Stuttgart’s win over Augsburg with a goal and an assist.

During the last transfer market Gonzalez attracted the interest of Leeds with more recent discussions taking place with Tottenham and Juventus for the 22-year-old’s signature.

Talks are still in the very early stages but Gonzalez extended his contract with Stuttgart to 2024 after they were promoted back into the Bundesliga and the club are reportedly asking for a €30 million fee for the winger according to The Athletic.

Tottenham are being linked with a central defender during this transfer window as there has been specualtion over Real Madrid’s Sergio Ramos.

The report says that Mourinho is a long-time fan of the defender who cost the Spanish giants close to £50 million in 2019.

Militao has not played for Madrid under Zinedine Zidane since October and Mourinho believes he can lure him to London.

All the latest transfer news…