A couple of old Sergio Reguilon tweets have resurfaced ahead of the Real Madrid full-back’s impending switch to Tottenham. Jose Mourinho’s side currently lead the chase for the Spaniard, moving ahead of Manchester United who were also interested in the defender’s services.

It seems Zinedine Zidane is happy for the 23-year-old to depart despite being voted La Liga left-back of the 2019/20 season, standing by stalwart Marcelo. Reguilon spent all of last campaign with Sevilla where he made 38 appearances and won the Europa League.

His displays attracted the attention of Manchester United and Tottenham with both sides keen to bolster the position. Ole Gunnar Solskjaer has already had to contend with Luke Shaw’s fitness inconsistencies in his short rein, while Brandon Williams looked flakey towards the end of last season.

Danny Rose has not been given a squad number for this season after returning on loan from Newcastle and his days at the club look numbered.

Reguilon is highly rated and would no doubt start in either side or, at the very least, provide plenty of competition. 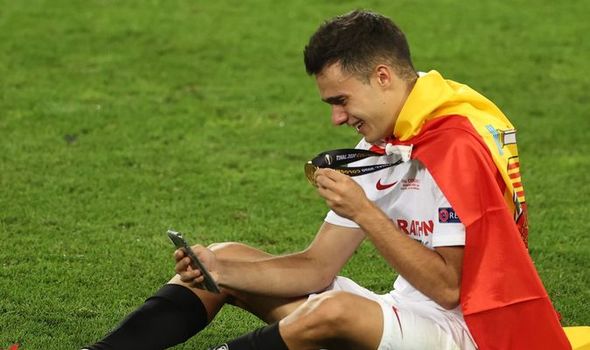 In the last day, however, Spurs have moved ahead of United in the chase for Reguilon’s signature. Real Madrid were keen to insert a buy back clause into the youngster’s contract should he fulfil his potential. And with Marcelo ageing it makes sense.

Ed Woodward and Matt Judge are not keen on such clauses being included in transfers, should it come to bite them in the behind further down the line. It is the same reason the Erlind Haaland talks broke down.

The striker’s agent, Mino Raiola, was desperate for a release clause to be inserted. When the two parties failed to come to an agreement talks broke down and Haaland moved to Borussia Dortmund.

This, however, is not a problem for Spurs who have given the green light for a buyback clause to be included.

And it’s just as well as it seems Reguilon has been a Tottenham fan all along.

The first tweet to resurface, from 2012, simply reads ‘Jose Mourinho’. Good job he’s such a fan of his potential new boss.

The second tweet, from 2013, includes a picture of Gareth Bale playing for Tottenham, with the caption: “Je t’aime.”

This translates to “I love you.”

As fate would have it Reguilon might not only play under Mourinho at Tottenham but with Bale for the same club also.