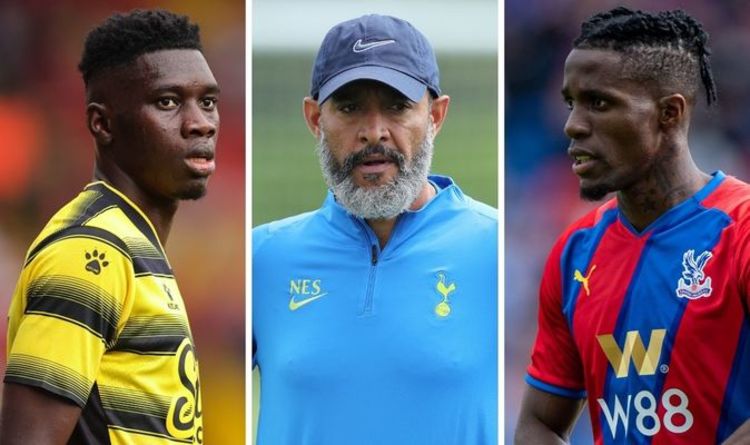 Jet-heeled wingers Ismaila Sarr and Wilfried Zaha are said to be amongst the latest names to appear on Tottenham’s radar, reports claim. Spurs are currently one of the busiest Premier League clubs when transfer activity is concerned as technical director Fabio Paratici explores the market to strengthen Nuno Espirito Santo’s current squad.

Tottenham still want a defender, central midfielder and striker but it appears another wide player could also be on the agenda.

Spurs have already snapped up Bryan Gil, who arrived as part of a player-plus-cash deal that saw Erik Lamela head the other way to Sevilla.

Yet it appears Paratici is open to the idea of adding some more quality out wide if reports are to be believed.

Football insider Dean Jones claims the club are sniffing around both Sarr and Zaha, who would add plenty of speed and productivity if they were to make the move to north London, although it’s clear they would not come cheap.

He told the Football Terrace: “What I’ve heard in the last few days is that a couple of other players have been linked with Tottenham.

“I’ve heard Ismaila Sarr at Watford, Wilfried Zaha of Crystal Palace, both players that Tottenham are looking at.

“It hasn’t gone very far yet and maybe they won’t progress with that interest but the fact that those names are being put forward, they’re a different type of forward.

Spurs have previously shown an interest in Zaha, who is still yet to earn his big move since returning to Crystal Palace from Manchester United.

The Ivorian international came close to joining Arsenal two years ago before the Gunners hierarchy decided to pursue Nicolas Pepe instead.

New Palace boss Patrick Vieira remains optimistic he can keep Zaha at Selhurst Park, where he wants to build his team around him.

“I’m aware about Wilfried [Zaha, his situation] in the last couple of years but we had a really good conversation and I’m looking forward to working with him,” Vieira recently said.

“He’s one of the most talented players in this league and we don’t want to lose one of our best players.

“I hope Wilfried will be part of that and I am looking forward to working with him and trying to take Palace as high as we can.”

Spurs are expected to focus their efforts on landing a new defender with Pau Torres now reportedly of strong interest.

The Villarreal defender had previously been on Manchester United’s radar but the Red Devils have instead pursued the signing of Raphael Varane.

In attack, Fiorentina’s Dusan Vlahovic is now firmly in the club’s sights and talks are ongoing with his representatives.