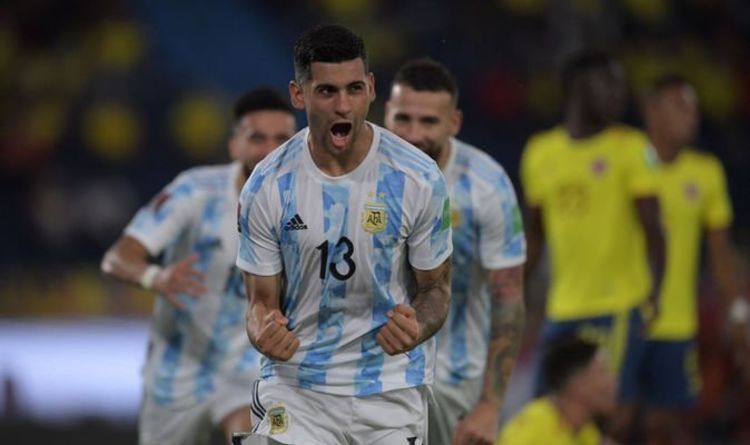 In pictures: Tottenham ease to win at Colchester

Tottenham are reportedly closing in on a second signing from Serie A side Atalanta, with goalkeeper Pierluigi Gollini already secured on loan. Cristian Romero would be the trickier second signing, although both parties are believed to be keen to work out a deal which would bolster Spurs’ defensive ranks.

Romero was crowned Serie A defender of the year last season, anchoring the back line of a hugely exciting Atalanta side who punched above their weight to finish third.

The Argentine is in the middle of a two-year loan from Juventus, although Atalanta supposedly have a £13.8million option to buy which they are keen to exercise ahead of schedule.

Once he officially becomes an Atalanta player, the financial intricacies of Spurs’ proposed deal can be worked out, although it remains a complicated situation.

But Spurs chairman Daniel Levy has given the thumbs up to a deal, according to football.london.

And Romero is also said to be interested in the move.

With a prospective £38.5million transfer fee in the works, Romero would become Spurs’ second most expensive signing of all time, behind Tanguy Ndombele.

Although an integral part of Atalanta’s back line, raising funds is made more tempting by the Covid-hit transfer market, particularly for clubs with less financial backing.

The 23-year-old is thought to be encouraged by the fact that Gollini, his team-mate from last season, would be there waiting for him if he made the switch to north London.

The Italian keeper is being lined up as the long-term replacement for Hugo Lloris, whose contract expires in 2022.

After a slow start to the summer thanks to a chaotic manager hunt, Nuno Espirito Santo and director of football Fabio Paratici now look to be closing in on a number of transfer targets.

Bologna’s Takehiro Tomiyasu is still linked with the club, while Sevilla’s Bryan Gil also seems there for the taking if Spurs are prepared to pay up.

Defensive reinforcements are likely to carry the most urgency for the Tottenham hierarchy this summer, with Toby Alderweireld potentially on his way out.

Recent reports have suggested that a £13m bid from Qatari side Al-Duhail could spell the end for the Belgian, who told the club he wanted to go in search of a new challenge earlier this summer.

Unfortunately for Nuno and Paratici, incomings are not their only concern over the next few weeks.

Rumours are still flying around regarding Harry Kane’s future, with recent reports claiming that a big-money move to Manchester City is edging closer.

However, it appears as though the club remain committed to keeping hold of their talisman. A new look Spurs looks to be in the works, but losing their star striker could be a bridge too far.

With Nuno in and a number of new signings in the pipeline, there does appear to be an injection of freshness on the horizon for a squad which has begun to look stale in recent seasons.