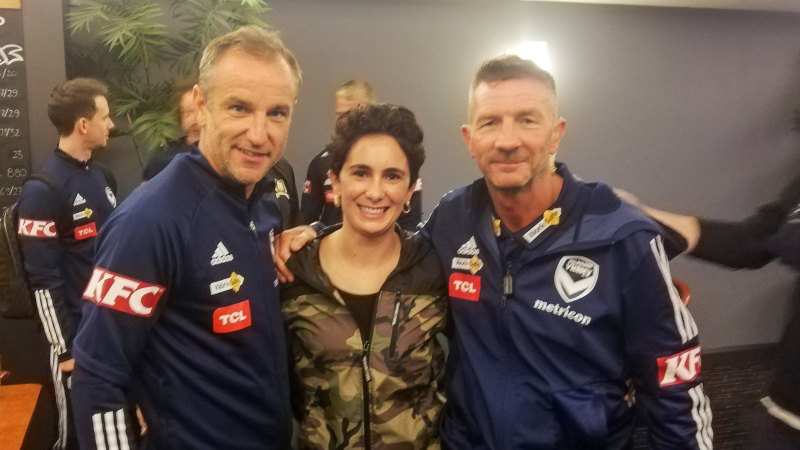 Melbourne Victory can’t take a trick on the pitch at the moment but club bosses know one sure fire way to appease frustrated fans: get on the beers with them.

So when their match against Sydney FC fell victim to the big wet in Sydney and was postponed, they headed to the pub.

Victory coaches and players decided to put thousands of dollars over the bar at the Kogarah Hotel in Sydney on Saturday afternoon to show their appreciation to almost 300 travelling supporters, who are enduring a miserable season. 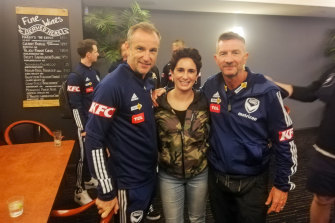 Melbourne Victory fan Tarni Tsimeris at the pub with players and staff.

It was, says chairman Anthony Di Pietro, something to ease the pain of recent results and to give supporters a huge thank you forstaying loyal in troubled times.

Among the Victory people in attendance were the under-pressure coach Grant Brebner, Socceroos striker Robbie Kruse and goalkeeper Matt Acton.

Tarni Tsimeris was one of those who had kept the faith, the 33-year-old having re-arranged her shifts to be able to make a 48-hour trip to Sydney to see her favourite team play.

She praised the way the Victory trio came into the bar and fronted fans – many of whom been vocal in their criticism of the team on social media.

“Things haven’t been going well but it is at times like this that you need to really get behind the team and follow them through thick and thin, which is what football supporters do,” said Tsimeris, who began following the team when she moved to Victoria from rural NSW five years ago.

“It was great to see the coach and players and to hear Grant Brebner explain his thoughts about the season, how expectations were not currently being met but how he was confident they would be eventually. We only need to string a few wins together and we can climb the table quickly.”

Di Pietro on Sunday afternoon said: “As soon as we knew the game was off we thought we really should do something. These fans are crucial to the club and they had all made a huge effort to get up there, so we wanted to show some appreciation for that and their support over a few tough weeks.

“I think that sort of thing is very important, and we have had some really positive messages back in the last 24 hours.”

Brebner, who supervised his players for a training session on Sunday, after their return to Melbourne said: “It wasn’t really a big thing but it was a chance to see the fans and talk personally to them, to try to explain how much we value their support and to let them know how we think things are going.

“There were probably about 20 there when we got there, with another 280 on the way. There was money behind the bar – there were 300 fans expected. It was our way of saying thank you.”