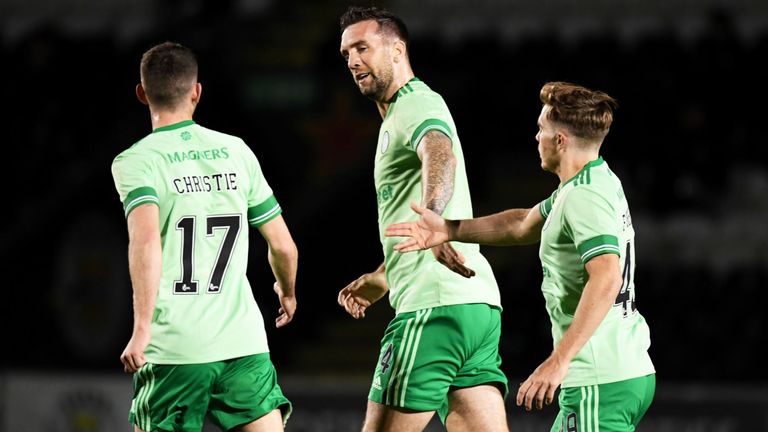 Goals from Shane Duffy and James Forrest helped Celtic come from behind to win 2-1 at St Mirren and stay in touch with Rangers at the top of the Scottish Premiership.

The champions fell behind after just three minutes at the Simple Digital Arena as Lee Erwin scrambled home his first goal for St Mirren.

However, the visitors responded to that setback to go in ahead at the break thanks to well-taken headers from Duffy – the recently signed centre-back’s second in two games – and Forrest.

Neil Lennon’s side held on for the win despite Odsonne Edouard’s second-half penalty miss to close the gap on Rangers at the top of the table to three points with a game in hand.

The match took place against the background of continuing Covid-19 issues which had affected the Paisley club.

More on this story

Third-choice goalkeeper Peter Urminsky, left out of the 3-0 defeat by Hibernian at the weekend as a precaution, started on the bench.

Joe Shaughnessy, Dylan Connolly and Junior Morais were back in the team along with Erwin.

Fourth-choice Zdenek Zlamal continued in goal for the hosts after No 1 Jak Alnwick tested positive for coronavirus.

Meanwhile, Celtic made four changes to the side that won 5-0 at Ross County on Saturday. Patryk Klimala was brought in, while fellow forward Albian Ajeti dropped to the bench. And Greg Taylor and Hatem Elhamed also started, as did Ryan Christie in midfield.

Celtic boss Neil Lennon also made four changes as he brought in Hatem Elhamed, Greg Taylor, Ryan Christie and Patryk Klimala, the latter coming into the side for his first start this season to partner Edouard.

It was the home side who struck first when Jamie McGrath’s corner from the right was flicked on by Shaughnessy and Erwin scrambled the ball over the line from a yard out.

Celtic’s inevitable response saw Saints pinned back and in the 19th minute Edouard headed wide from a Forrest cross.

However, moments later, Republic of Ireland international Duffy was more accurate from Christie’s free-kick from wide on the right as he powered in a header past Zlamal, undoing all Saints’ good work.

Celtic’s pressure was relentless. Zlamal made good saves from Callum McGregor and Edouard but had no chance with Forrest’s well-placed header, with Christie again the provider.

St Mirren had to come out of their shell and there was a penalty claim for handball against Duffy in a packed Celtic penalty area turned down by referee John Beaton.

The Hoops carried their threat into the second half.

McGregor came close with a low drive from 16 yards, Zlamal pushed a dipping Edouard free-kick from 20 yards past the post and then saved a long-distance effort from Christie.

Celtic kept the ball zipping around as St Mirren retreated to the edge of their box in compact shape, but a foul by McGrath on Christie had Beaton quickly pointing to the spot, only for Zlamal to dive low to block Edouard’s penalty.

Still, Celtic dominated possession but the Buddies keeper again proved his worth with another fine save from Christie’s 20-yard drive in added time.

St Mirren travel to Dundee United, while the champions entertain Livingston at Parkhead, with both Scottish Premiership matches kicking off at 3pm on Saturday.