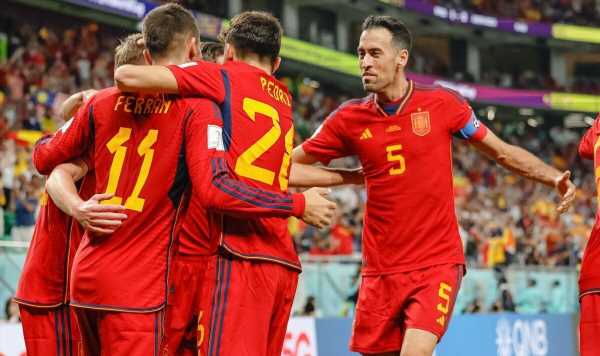 Spain ran riot against Costa Rica to cruise to an opening World Cup win. Dani Olmo, Marco Asensio, a Ferran Torres brace, Gavi, Carlos Soler and Alvaro Morata gave La Roja all three points on a sublime night for the 2010 champions. Top spot in the group, certainly, looks like theirs to lose…

Spain are far more organised for this World Cup than they were in Russia four years ago, when Julen Lopetegui was sacked at short notice with Fernando Hierro coming in.

Based on this performance, La Roja have benefitted from the authority Luis Enrique brings.

Spain were in cruise control right from the start against Costa Rica and opened the scoring through Olmo, who converted after excellent work from Gavi.

Asensio then doubled their lead in the 21st minute, with the Real Madrid star scoring where Keylor Navas really should have done better.

Torres put his country 3-0 up with a penalty with just over 30 minutes on the clock.

And after the Barcelona star struck again, Gavi, Carlos Soler and Alvaro Morata also netted to complete the rout.  It was a straightforward night for Spain and Express Sport now takes a look at four things we spotted from the stadium.

One of the most common themes of this World Cup has been the number of empty seats at matches.

Though FIFA have insisted they’ve sold the majority, it’s hard to see that actually being the case when it’s clear it isn’t.

It was no different at the Al Thumama Stadium, with empty green, white and red seats all around the ground.

Of course, FIFA’s official attendances have been a bit askew. Maybe they’re counting them all individually…

But it does feel like a World Cup unlike any other. Which it was always going to be…

Pedri is seen as the heir to Xavi’s throne, both with Barcelona and Spain.

And it’s clear fans of La Roja appreciate the teenager who, rather scarily, is just 19.

Pedri oozed class during the proceedings in Doha, with the Barcelona star at the heart of everything and dictating play in the middle of the park.

Every time he touched the ball fans would cheer. They know he’s destined for a long career at the very top and it’s actually scary to think how good he can be in the future.

Gavi isn’t bad either and assisted Olmo for the opening goal of the game. Pedri, however, was the conductor.

Before kick off, Costa Rica fans were actually making quite a racket. Situation to the right of the stadium, they were in good voice.

But, with less than half an hour left on the clock, they’d gone quiet.

It’s understandable, because Spain were superior throughout the showdown. Luis Enrique’s team go under the radar these days but there’s enough talent in his squad to propel them to a second ever World Cup trophy, having previously reigned supreme back in 2010.

While Costa Rica fans were silenced early on, however, Spain made it a party atmosphere inside the ground.

They waved their flags, cheered their heroes and reacted to every little incident as their side cruised to all three points. More celebrations, later in the tournament, can’t be ruled out.

Even with his side cruising to victory, Enrique was an animated figure on the touchline.

The former Barcelona and Roma boss could be seen gesturing throughout the showdown, spurring his players on and encouraging them to keep attacking time and time again.

While Enrique made sure to stay standing throughout virtually the whole game, however, it was in stark contrast to his Costa Rican counterpart Luis Fernando Suarez.

Suarez was snapped looking glum as his side toiled out on the pitch and, with Japan and Germany up next, he knows his side face elimination.

On the basis of this performance, they should be packing their bags already. There’s absolutely no chance they get out of this group and a repeat of their heroics of 2014, when they made the quarter-finals, would be a miracle.

November 23, 2022 Soccer Comments Off on Spain vs Costa Rica another seating disaster and Enrique wild on bench
NFL News