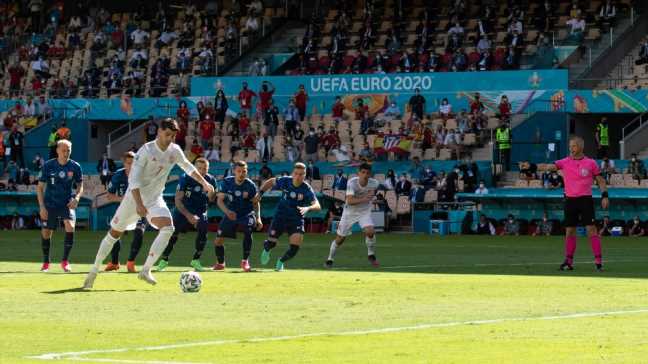 Graham Hunter is a Barcelona-based freelance writer for ESPN.com who specializes in La Liga and the Spanish national team.

Perhaps you consider the idea ridiculous.

Spain, admittedly, have just scored 10 times split evenly across their past two matches — no team has ever done that in the history of the European Championship. La Roja have only twice scored more goals at any tournament than the 11 they’ve smashed home so far in four games at Euro 2020: their victorious Euro 2008 and Euro 2012 campaigns. Moreover, Luis Enrique’s side are firm tournament favourites — never mind hotly tipped to dispatch Switzerland when then meet in St. Petersburg on Friday.

But here’s my case: If you are completely disregarding the idea that this quarterfinal might well be decided by the mad, devilishly unpredictable lottery known as a penalty shootout, then I reckon you’re in denial. Yes, if La Suisse really miss Granit Xhaka through his yellow-card-accumulation suspension; if they can’t commit fully to the muscular, relentless press that makes them deeply uncomfortable opponents; if they used up too much physical and emotional energy knocking out world champions France the other night in, perhaps, the greatest match of the country’s history then Spain might pummel them into submission.

Luis Enrique used a brilliant metaphor the other day, prior to the first five-goal spree against Slovakia, when he promised that, “When my players ‘unblock’ themselves it’ll be like when you shake a bottle of cava and pop the cork out.” What an image and what a way for his team to go out and prove how well their coach understood their training performances.

Two wins and ten goals later, it’s fair to say that the 2012 champions — who, remember, hadn’t won a tournament knockout match since then — deserve to be favourites and, if they hit form, they’ll win. But let me build my case, then feel the doubts start to gnaw at your previous certainty about what was going to happen in St. Petersburg.

In 2021, Spain have drawn five of their past eight 90-minute matches (I’m not counting the 4-0 win over Lithuania, which was disputed by 17 U21 players who are not even at this tournament). Of the other three, it took an added-time thunderblaster from Dani Olmo to prevent a 1-1 draw in Georgia.

The past four matches between Switzerland and Spain have been a pair of draws plus a 1-0 win for each team. See how the evidence is mounting. This has the potential to be excruciatingly tight if La Roja aren’t quite on their game.

The heavy premium for things going the way that stats suggest they might is that Spain, like the tightrope walker who breaks the habit of a lifetime and looks down, have suddenly lost their nerve from 11 metres. If this quarterfinal does actually push through the 120-minute barrier without a winner then, suddenly, Switzerland will probably be walking to the shootout with a swagger. And not just because it was via a perfect exhibition of penalties that they eliminated France in the last round: Mario Gavranovic, Fabian Schar, Manuel Akanji, Ruben Vargas and Admir Mehmedi each bulged the net. No problem.

Spain — chew on this, folks — have a perfect record, too. They’ve missed five out of their past five spot kicks. Better still, for the sake of the story at least, that horrific record started against … Switzerland. Don’t you remember?

Sergio Ramos was on a monster two-and-a-half-year, 23-penalty run of scoring from the 11-metre spot for Spain and Real Madrid. Then Switzerland’s man between the sticks, Yann Sommer (the same guy who heroically saved Kylian Mbappe’s effort the other night) saved twice from the Spanish captain in the space of 23 minutes.

Since then, Abel Ruiz (in that strange match against Lithuania), Gerard Moreno (against Sweden) and Alvaro Morata (against Slovakia) have made it five flops from five kicks. As usual with lies, damned lies and … statistics, you can tilt them negatively or find the silver lining behind the clouds.

The current stinker of a record flies in the face of what’s normal in Spanish football. La Roja made a habit of winning penalty shootouts in the times they made a habit of winning tournaments. Twice, against Italy in the 2008 quarterfinal and then again in the 2012 semifinal versus Portugal, it was Spain who emerged from the most dramatic and fascinating spot-kick competitions you could wish to witness.

Spain were scared of Italy in 2008. They were their betes noire. No question. But when Dani Guiza missed his effort, Iker Casillas involuntarily yelled out, “Don’t worry, Dani, I’ll just save the next one”. And he did. Four years later Xabi Alonso missed the opening penalty in the sudden-death contest against Cristiano Ronaldo’s Portugal, but Ramos still had the fortitude to Panenka the ball over Rui Patricio in the penultimate penalty before Cesc Fabregas — just like he did in 2008 — slotted home the winner.

Invincible in open play, invincible from the spot. That was Spain back in the day.

Even in club football the most recent evidence of La Liga’s 11-metre sangfroid was Villarreal notching 11 straight times from the spot to deny Manchester United the Europa League in Gdansk. Luis Enrique may wish to recall that Moreno and Pau Torres, far from automatic choices here at the Euro so far, were in that successful shootout squad.

All of which raises another question. Spain face Sommer again, and his penalty record makes interesting reading: He’s faced 19 which he’s either saved or the taker has missed, but he’s let in 63. Even at the age of 32, to have faced 82 competitive penalties (excluding shootouts) is pretty remarkable. Seven have been for Switzerland, including the two Ramos missed.

That makes it pretty interesting as to who would take it and what would happen if Spain were awarded a penalty against Vladimir Petkovic’s side. Luis Enrique told us the other day that there was a shortlist of three (who I guess to be Morata, Moreno and Koke); that the players had been, of their own volition, practising penalties since training for the competition began; and that in any given circumstances during a match he, or any of the three, could change the agreed pecking order, which I believe means that Morata remains the first taker if one is awarded during the 90 minutes or extra time.

It all adds to the spice, to the sense of drama. Spain should win in St. Petersburg, and they have the potential to win the entire tournament.

“Have you seen any team at the Euro who you think is superior to Spain,” Luis Enrique was asked on Thursday. “No,” he answered after taking long enough to pretend he’d had to think about it.

But what if this exciting-but-fallible team get their laces tied together again? What if it’s a long, nervy 120 minutes and then the dreaded penalties. Will the real Spain (please) stand up? Or can Switzerland give La Roja the Sommer-time blues just like they did to Les Bleus?

Stay tuned. This will either be easy, or epic.

July 2, 2021 Soccer Comments Off on Spain should beat Switzerland… but not if they go to penalties
NFL News