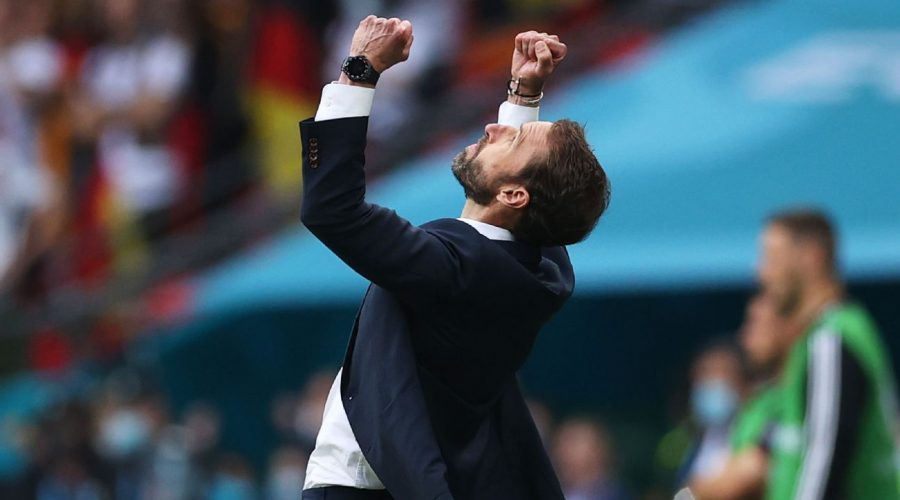 England are at a dangerous moment, coach Gareth Southgate warned on Tuesday as he urged caution about getting over-excited after their 2-0 win over Germany in the last-16 of Euro 2020 at a raucous Wembley.

Goals from Raheem Sterling and Harry Kane gave England a 2-0 win which was their first triumph over Germany in a knockout tie since the 1966 World Cup final, the occasion which kickstarted half a century of footballing rivalry between the two nations.

Although the 43,000 strong crowd at Wembley created a deafening atmosphere once England were in front, Southgate was aware of the perils of getting lost in the buzz ahead of a quarterfinal tie in Rome on Saturday.

“It didn’t really need me to say it but when we got in the dressing room, we were talking about Saturday already because today’s been an immense performance but emotionally and physically at a cost,” Southgate told a news conference.

“We’ve got to recover well, and [make sure] mentally we’re in the right space. It’s a dangerous moment for us. We’ll have that warmth of success… and we know it’s going to be an immense challenge from here on.

“The players know that. Their feet are on the ground, they feel confident from the way they’ve played. But, of course, we came here with an intention and we’ve not achieved that yet.”

England’s win came after Southgate reverted to a three-man central defensive setup, the formation he used when his side reached the semi-finals of the 2018 World Cup in Russia.

The victory also meant that England have reached the last four and then at least the last eight in successive tournaments for the first time since 1970.

“These players keep writing history and they’ve got the chance again — we’ve only ever been to one European Championship semifinal,” Southgate said.

“They’ve got the chance to do something really special and we’ve got to make sure we’ve got a really good chance of doing that.”

That one previous semifinal appearance is a painful memory for Southgate, though he did not draw too much on it, given that he missed a crucial penalty against Germany at the old Wembley in the losing semifinal shootout of Euro ’96.

“I can’t change the fact the guys I played with in ’96 didn’t get to play in a final and that will always live with me,” the 50-year-old said.

“But what this group of players have been able to do is give a new generation a lot of happy memories and another afternoon where they’ve made a bit of history.”

After the match England’s players took time to tour the pitch and enjoy the celebrations with the fans.

That feeling will no doubt provide an incentive on Saturday when they face either Ukraine or Sweden, with the semifinals and final to be hosted at Wembley.