The Tottenham squad does not always look very well-stocked but here at the London Stadium they rotated their way through the League Cup quarter-finals. Forced to play 48 hours after their last match, and therefore making 10 changes, Spurs still included Dele Alli, Christian Eriksen and Son Heung-Min . And those three, with help from Fernando Llorente, cut through West Ham to win 3-1.

The Carabao Cup is not always at the top of fans’ priorities, and it has not been for Mauricio Pochettino over the years. But given the negative feeling around Tottenham this season, the likely European exit, the Wembley debt and delays, and Pochettino’s complaint that he has never felt this bad as Spurs manager, this win could be the mood-lightener Spurs need. They are now just two rounds away from the final. Playing at Wembley may not be much of an attraction any more, but the possibility of winning a trophy certainly is.

Even with those 10 changes, Tottenham could still put out far more match-winning quality than West Ham. It certainly helped that Christian Eriksen and Dele Alli had been out injured recently, and were both on the bench against Manchester City just two days ago. Because it meant that here they could come back into the team, giving this much-changed side an extra edge. 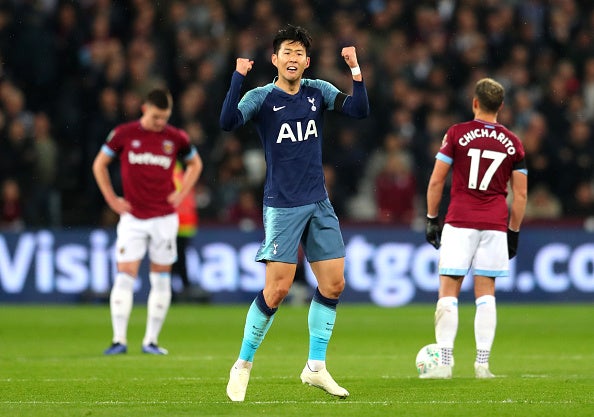 West Ham started brightly, especially when they got the ball to the exciting 20-year-old Grady Diangana out on the right. He could get behind stand-in left-back Serge Aurier more often than not and with more experience he could have helped West Ham into the lead.

But ultimately they could not compete with the superior experience and class of Spurs. They had their warning when Eriksen ghosted down the left and set up Alli to score, only for the goal to be disallowed because Eriksen had made his run too soon. With Spurs’ next attack, they were ahead: Eriksen fired a forward pass, it was poorly cleared and Llorente played in Alli. With the impudence and flair that makes him so good, Alli backheeled the ball through and Son wrapped his finish into the top corner. Not bad for what might have been the B Team.

West Ham had nothing remotely similar to offer. With Marko Arnautovic rested, they had to rely on a sadly out-of-touch Javier Hernandez up front. The difference between what the two men offer this team could hardly have been clearer. Hernandez cannot hold the ball up and lacks the conviction to run in behind. Two half chances fell to him at the end of the first half: one he miscontrolled, the second a comfortable save. 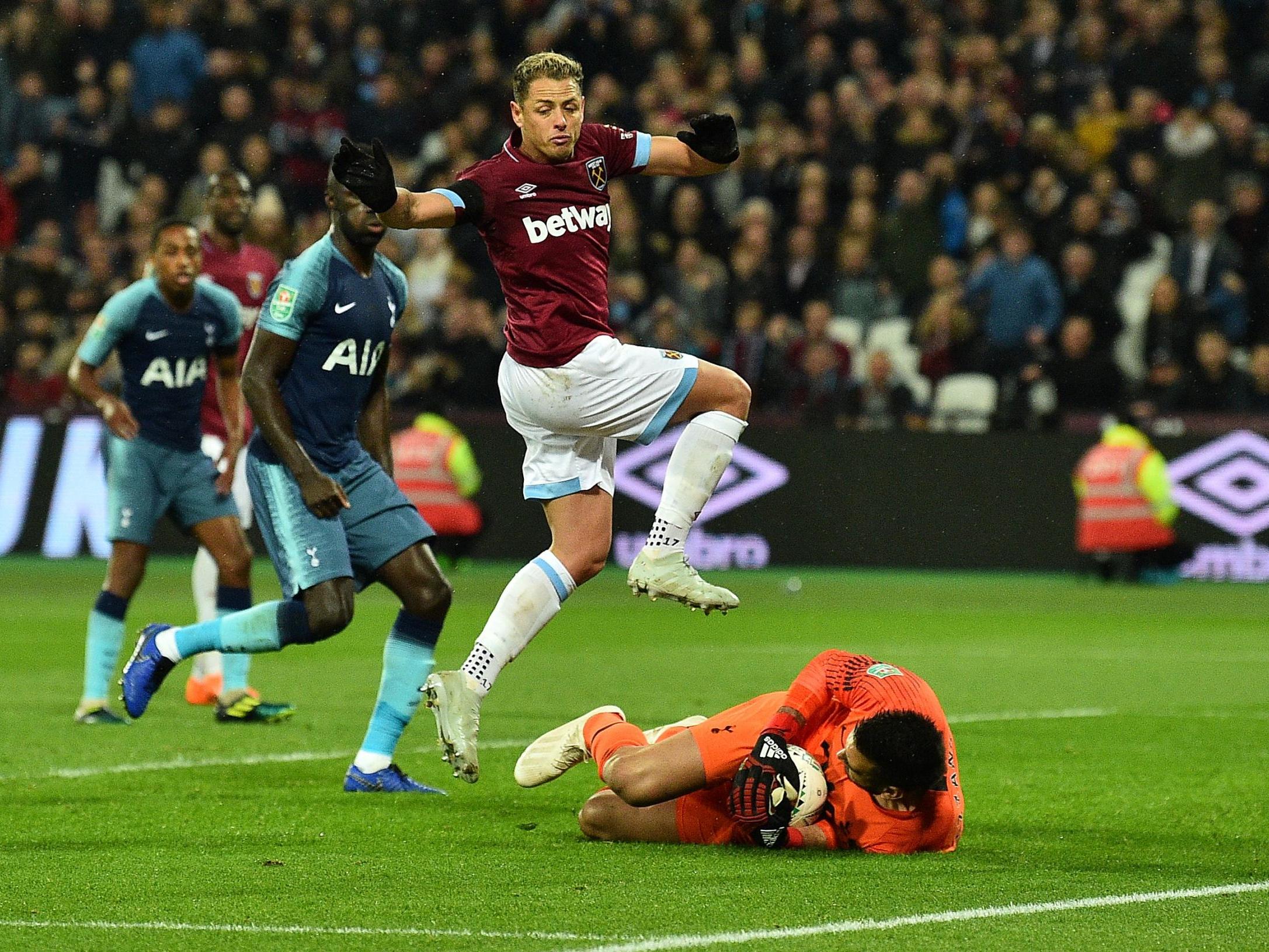 West Ham desperately needed more quality but their response was to bring on Robert Snodgrass for Felipe Anderson at the break. And soon enough they gifted Tottenham a second goal. Again it came from the interchange of Spurs’ dangerous attackers, but this time with a very generous help from a West Ham defender.

Spurs were trying to break forward and Alli swept a forward pass looking for Son’s run. He overhit the ball but it clattered into Masuaku’s shins, and the deflection turned a poor pass into a good one. Running through on goal, Son swerved to the left at the last moment and tucked the ball past Adrian. Son had not scored for Spurs since 11 March, almost eight months ago, but these two finishes were a reminder of what a natural in front of goal he looks like when he is on song. The only frustration for him and for Spurs is that he has not been nearly this dangerous for so long. 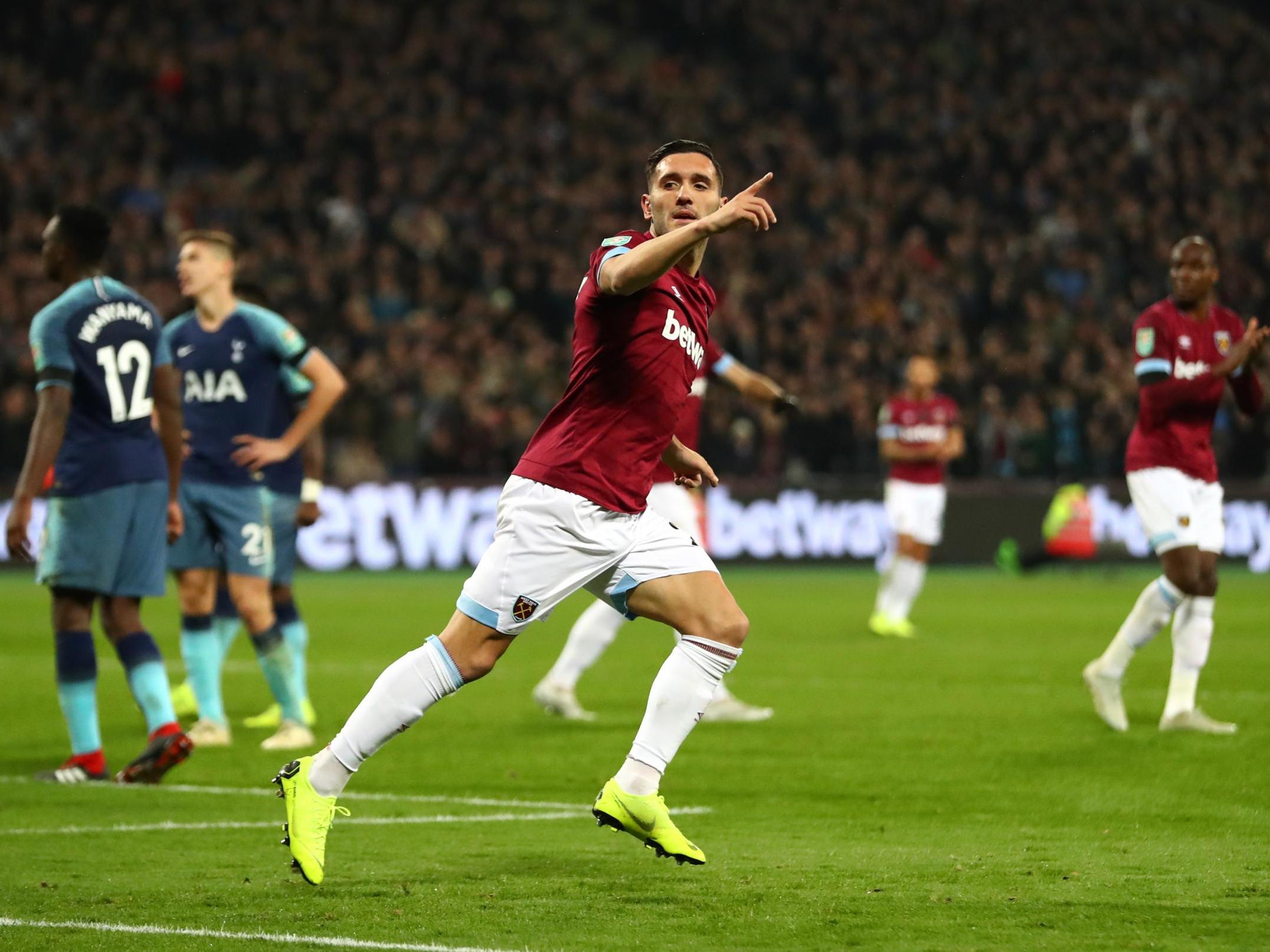 Only now, two goals down, did West Ham go for it. Hernandez was finally hauled off, Arnautovic and Lucas Perez chucked on as Manuel Pellegrini went for a classic 4-4-2. Just like in the Premier League game here 10 days ago, it took West Ham until they were almost done to come back into the game. But this time, it worked. Arnautovic broke down the right and won a corner from Juan Foyth’s tackle. Snodgrass curled it over and there was Perez at the far post to nod it in.

But anything West Ham can do, Spurs can do better. Even down to a disaffected back-up Spanish striker converting from a corner kick. Minutes after Perez’s header, Eriksen swung in a corner at the other end and Llorente held off the challenge of Ogbonna, swivelled and volleyed past Adrian. It was his first Tottenham goal since February. Like Son, he had chosen a good moment to get back amongst the goals.