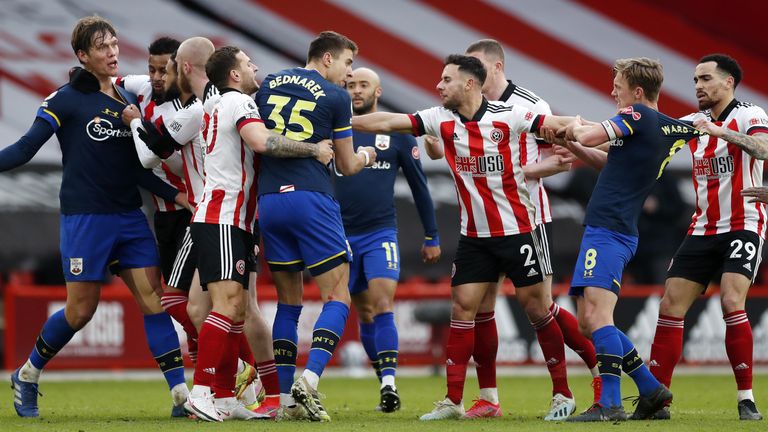 Sheffield United and Southampton have been fined £20,000 each for failing to control their players after tempers flared late on in Saints’ 2-0 win at Bramall Lane on March 6.

The incident came in the first of three minutes added on when the Blades’ John Fleck fouled Che Adams, the ex-Sheffield United striker, who was on the scoresheet in Southampton’s win.

Fleck was shown a yellow card for the challenge, checked by VAR, but Saints players surrounded referee Paul Tierney demanding more, with United’s Oli McBurnie and Southampton’s Jannik Vestergaard booked for their reactions.

A FA statement read: “Sheffield United FC and Southampton FC have been fined £20,000 for a breach of FA Rule E20 that occured during their Premier League fixture on Saturday 6 March 2021.

“Both clubs have admitted failing to ensure that their players conducted themselves in an orderly fashion during the 90th minute and accepted the standard penalty.”

Che Adams has been called up by Scotland for their upcoming World Cup qualifiers.

Adams played for England at U20 level and had previously turned down an approach by Scotland. The 24-year-old was born in Leicester but qualifies for Scotland through one of his grandparents.

“Che is obviously someone we tried to get before when Alex McLeish was manager,” Clarke told Sky Sports News.

“It’s four years ago now so he was a young man at the time. He has matured a little bit more, played a few more games, got his move to the Premier League and done very well.

“At the start of last week I got a little tip-off that he was interested in choosing Scotland as his international country. Thankfully after a couple of conversations he’s come down on our side.”