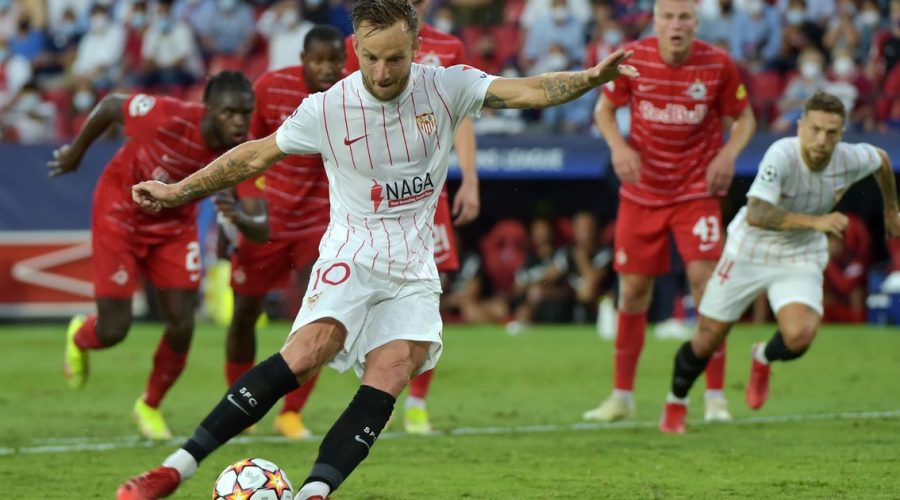 Salzburg received the first spot-kick of the night when Sevilla's Diego Carlos was deemed to have brought down Karim Adeyemi inside the box after just 12 minutes.

Adeyemi squandered his lines by sending his effort wide of the post, but nine minutes later the visitors were awarded a second penalty in Spain when the former was bundled over again by Jesus Navas.

This time Luka Sucic stepped up from 12 yards, and he made no mistake in tucking the ball past Sevilla goalkeeper Bono to open the scoring.

However, the Croatian midfielder went from hero to zero when Adeyemi earned a third penalty eight minutes before half-time.

Because his second attempt struck the post and bounced clear to the relief of Bono, whose foul on Adeyemi had given Salzburg the chance to double their lead at the Ramon Sanchez Pizjuan Stadium.

Who do you think will win the Champions League this season? Let us know in the comments section below.

And to cap an unprecedented half of Champions League football, five minutes later the referee pointed to the spot for a fourth time when Sevilla striker Youssef En-Nesyri went down in the box.

It was the first time that four penalties have been awarded in 90 minutes of a Champions League game, making it all the more incredible that all were awarded in the space of half-hour.

Ivan Rakitic converted from the spot to level proceedings for the hosts, which proved the final goal of a truly bizarre 1-1 draw.

Yet the drama didn't stop there, as five minutes after the interval En-Nesyri was shown a second yellow card for diving inside the area.

The Moroccan's sending off provided another moment of controversy given the fact he had been correctly flagged by the linesman for offside before his act of simulation.

In the end his dismissal did not prove costly for Sevilla, who held firm for a share of the spoils in their opening Champions League group-stage fixture.

Elsewhere in Group G, Lille and Wolfsburg played out a 0-0 stalemate in Villeneuve-d'Ascq.