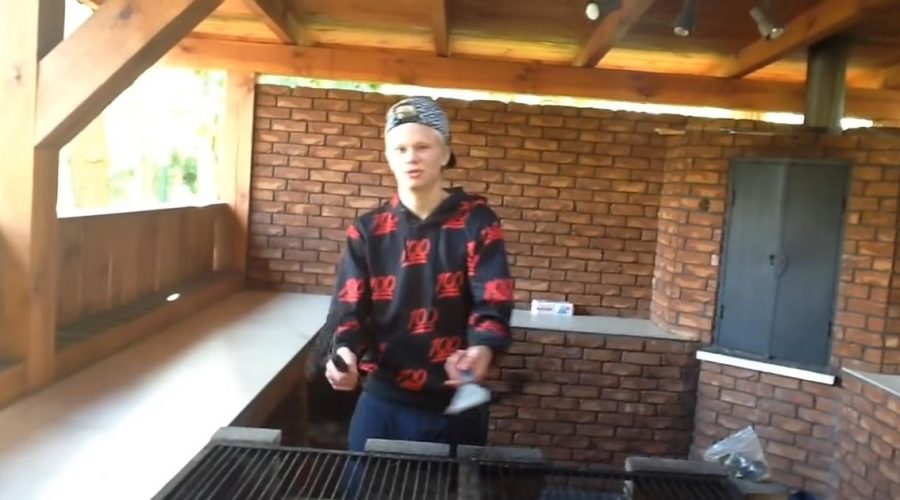 Erling Haaland has dominated the headlines this week after sealing his £51million switch to Manchester City – but the Norwegian hotshot is bringing more than just his goalscoring ability to the Premier League.

The 21-year-old is one of a host of big-name players who have swapped their football boots for the recording booth and tried their hand at rapping. Admittedly, some have been more successful than others, including one or two familiar names who have even managed to churn out quite a few tracks.

From Manchester City's new main man to a striker who lifted the Premier League and the Champions League with Manchester United, Daily Star Sport takes a look at seven footballers who have tried to rap over the years…

Haaland has made headlines with his big-bucks move to City this week, but the Norwegian prodigy is one of a string of high-profile stars who have tried their hand at spitting some lyrics.

When he was 16, Haaland teamed up with Erik Botheim and Erik Tobias Sandberg – two of his former Norway U19 team-mates – to release a cringey rap video on their YouTube channel. The trio dubbed themselves as Flow Kingz – but there wasn't much flow on show.

Unsurprisingly, Haaland decided to stick with his day job, telling FourFourTwo, via Fotmob: "We had a long day and nothing to do and then we decided to make a rap video. I think I'm much better at football, but my rap skills? They're not that bad."

During his time at Manchester United, Lukaku swapped goalhanging for the recording booth when he teamed up with Belgian rapper TheColorGrey.

The track, called 'New Levels', touched on Lukaku's tough upbringing and his desire to reach the top. While he's done just that since then, his rapping skills went down like a lead balloon.

His former United team-mate Jesse Lingard crucified the striker for his bars and even shared a parody version of Lukaku in the recording booth to his own social media account.

Bayern Munich speedster Davies has been advised to 'stick to his day job' by fans on social media after the Canadian star dropped his own rap with three other footballers.

The Stugang Collective is made up by Davies, SV Heimstetten ace Alexis Fambo and 1860 Rosenheim's Stephan Menseh released 'Nur Weil’ – which translates to 'Only Because' – earlier this week.

However, while the gritty track hasn't been a hit online, it remains to be seen if Davies and co will attempt to rebound with another track like the majority of the stars on this list.

Danns racked up a host of clubs during his illustrious career, but he is another footballer who has dabbled in the music industry alongside his on-pitch exploits.

The midfield maestro even released his own single, 'Keep your Head Up', alongside Janiece Myers and Spyder back in 2011.

Since then, Danns has entered into the world of music production, although he is currently still playing in non-league with Macclesfield Town.

Unlike the majority of footballers on this list, Depay has actually showcased his rapping abilities on multiple songs in recent years. The Dutch attacker even has his own profile on Spotify, but his songs haven't exactly turned out to be a smash hit.

The 28-year-old's most famous tune is arguably his 2018 effort, “5 Milli Freestyle,” mainly due to his witty line on Lionel Messi. The song was released just a few years before Depay thought he was linking up with the Argentine star when he signed for Barcelona.

But unfortunately, Messi ended up leaving the club shortly after due to the club's financial situation – something that left Depay gutted. He'll probably write a song about it one day…

Perhaps best known for his stint in the Premier League with Sunderland, Gyan is another footballer who has delved into the world of rap.

The 36-year-old first showcased his musical talents all the way back in 2012 when he released Africa Girls featuring Castro and Kofi Kinaata.

Since then, Gyan has featured on a number of tracks with various artists and has often shared snippets of himself spitting tunes on his social media accounts. Ghana's all-time leading goalscorer is still going strong, but he could have a viable career to fall back on when he does finally hang up his boots.

Drenthe was a maverick Dutch winger who had spells at Real Madrid and Everton, but he also embarked on a musical career back in 2017. His first release 'Paranoia' which was released under the moniker Roya2Faces, was followed up by a string of other tracks.

But unfortunately, Drenthe's wild career move hasn't appeared to pay off. A report from Dutch news-site AD back in December 2020 revealed that the 35-year-old had been declared bankrupt after blowing his footballing fortune.

As well as stepping up to the microphone, Drenthe has also turned his hand at the small screen. He appeared in the Dutch series Mocro Mafia, a show based around the gritty Dutch underworld.

Cole may have spent his entire career terrorising Premier League defences, but his foray into the musical world left a lot to be desired. The ex-Manchester United and Newcastle striker teamed up with Pied Piper to release 'Outstanding' in 1999 – but the single was anything but.

Unsurprisingly, the R&B track didn't hit go down well. Cole even tried to wedge his United affiliation into his show-stopping verse, declaring: "United forever, whatever the weather, less than 100%, never."

Unfortunately, it didn't help them shift many copies of the tune in Manchester, or anywhere else for that matter.

May 14, 2022 Soccer Comments Off on Seven footballers that have tried rapping from Haaland to Depay
NFL News