Manchester City striker Sergio Aguero is reportedly desperate to join Barcelona this summer. Aguero is out of contract at City next month and has attracted attention from all over Europe since the club announced in March that they would not renew his deal.

The 32-year-old has struggled with injuries this season, making just 17 appearances – 10 of which have come off the bench – across all competitions for Pep Guardiola’s side.

However, his eye-catching fourth goal of the campaign in City’s 2-0 win over Crystal Palace on Saturday has reignited discussion around his future.

Aguero has now scored 182 goals and provided 46 assists in 273 Premier League appearances since signing for City from Atletico Madrid in 2011 and can join a new club on a free transfer from June 30.

The Argentina international has been heavily linked with a move to Barcelona this summer and now new reports have emerged on the Catalan giants’ plans in the transfer market.

Mundo Deportivo reports that Aguero is ‘crazy’ to play for Barca, who see him as a viable and more affordable alternative to Borussia Dortmund star Erling Haaland. 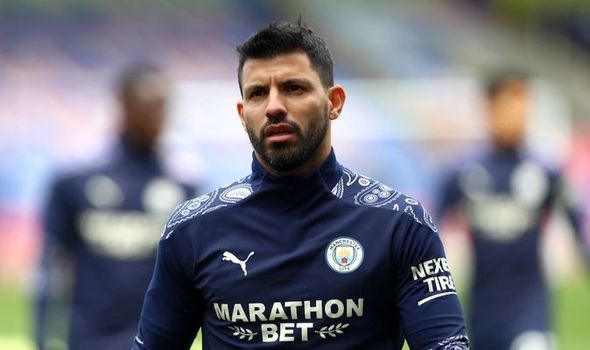 The report states that Dortmund want a fee in the region of £129million (€150m) for Haaland, if they are to let him leave this summer, something Barcelona cannot afford to pay.

Barca have prioritised the signing of a ‘top-class number nine’, and while they have already had discussions with Haaland and his representatives, they are looking at other options.

Aguero is seen as a good alternative, especially given his close relationship with Lionel Messi, who the club are desperate to keep hold off.

Deportivo says that Aguero is willing to take a pay cut in order to finish his career playing alongside Messi.

That eventuality would please Aguero’s former City and Argentina team-mate Pablo Zabaleta, who believes Barcelona would be a good fit.

“I see him at Barcelona,” he told Spanish radio station Cadena Ser, as reported by Sport.

“I’m sure that as soon as he gets better, he’ll be the player we’ve seen for years.

“If he can be physically fit and not have injuries that prevent him from being consistent during the season, he can still have at least two good years left in him.”

Meanwhile, Memphis Depay is also on Barcelona’s radar, with his Lyon contract set to expire next month.

Depay has already looked at houses in Barcelona and is a particular favourite of Ronald Koeman, who worked with him as Netherlands manager.

Juventus, Inter Milan and Atletico Madrid have also reportedly made clear their interest in the 27-year-old forward, but he prefers the offer from Barca.

May 5, 2021 Soccer Comments Off on Sergio Aguero ‘crazy’ to play for Barcelona as club’s summer transfer plans emerge
NFL News