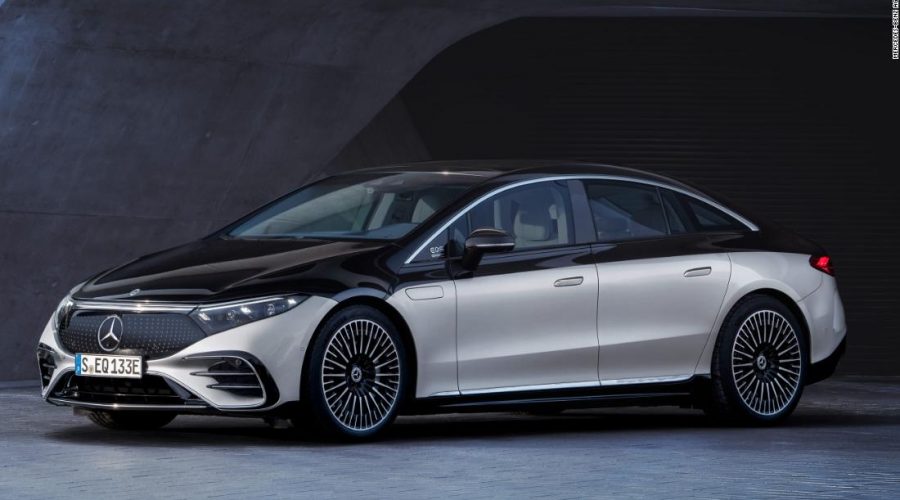 (CNN)Mercedes has unveiled its largest and most luxurious electric car yet. The Mercedes EQS is the battery-powered equivalent of the Mercedes S-Class sedan, the brand’s flagship model.

Like the S-Class, the EQS is designed for roominess and comfort. With no need for a large engine, the EQS has a sloping hood, making it reminiscent of cab-forward designs that were at their most popular in the 1990s. It also has a more gently tapered back end. And that, Mercedes designers boast, has helped to make the EQS the most aerodynamically efficient factory-produced passenger car in the world.
To help it slip through the air even more smoothly, the EQS’s body automatically lowers slightly at speeds of more than 75 miles an hour, and then a little more at speeds of more than 100 miles an hour.

The car can go about 480 miles on a charge, according to estimates using European testing standards. (Testing methods used by US agencies tend to yield lower range estimates.) 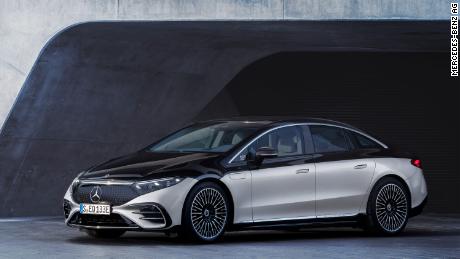 Like the S-Class, the EQS is intended as a showcase for Mercedes’ most advanced technologies. For instance, the doors operate automatically, similarly to those on some Tesla models. Door handles extend automatically as the driver approaches and, as the driver gets closer, the doors open. The door can also close itself when the driver steps on the brake. The driver can also operate the passenger doors to allow others to enter and exit the car.

Inside, the Mercedes EQS has an optional touchscreen system that covers the entire dashboard from the driver’s side window to the passenger’s. Beneath this immense curved glass panel, there are actually three separate screens — including one just for the passenger — but they have the appearance of continuous surface.
For customers who prefer a more traditional look, the EQS will also be available with a rectangular central touchscreen with the rest of the dashboard is covered in wood, leather or other materials. 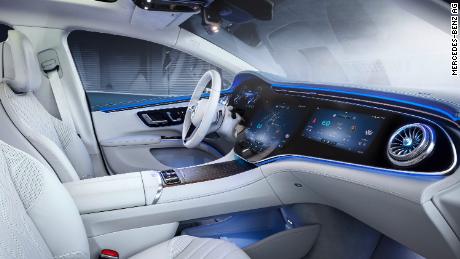 The EQS has a special Power Nap program to help drivers get some sleep during a rest stop. It automatically reclines the driver’s seat into a resting position, closes the windows and the sunshade across the glass roof. The interior lighting and temperature are also adjusted to create a soothing atmosphere. Relaxing sounds come from the stereo and images of a starry night sky appear on the dashboard screens. After a while, the car begins a wake-up routine that includes special energizing fragrances and a gentle massage. Finally, the seat back rises and the overhead sunshade opens.

The EQS also offers four-wheel-steering, a feature that is also available on the S-Class sedan. At low speeds, the back wheels turn slightly in the opposite direction from the front wheels. This provides the ability for a large vehicle to turn around in a much smaller space than it could otherwise. At higher speeds, the rear wheels can turn in the same direction as the front for more fluid lane changes.
The EQS will initially be offered in two versions, the rear-wheel-drive 329 horsepower EQS 450+ and the all-wheel-drive 516 horsepower EQS 580. Mercedes hasn’t announced pricing for the EQS, but it’s expected to be over $100,000. Prices for the gasoline-powered S-Class start at just under $100,000. The EQS will go on sale in the US in the fall of this year.
Source: Read Full Article