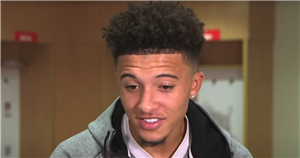 Jadon Sancho has promised Erling Haaland they will "soon meet again" after the Dortmund striker wished him well following his transfer to Manchester United.

Sancho completed a £73million transfer from BVB to Old Trafford last week, putting pen to paper on a five-year deal.

After the transfer was announced, Haaland took to social media to bid farewell to his friend.

"Good luck on your next journey bro," wrote Haaland. "We had some good times together! Can't wait to see you shine!"

Sancho responded to the post: "A connection like no other, we will soon meet again brother. Take care and good luck to you too."

Manchester United were linked with both Haaland and Sancho before they opted on prioritising the latter and parted with a whopping £73million to make the transfer happen.

The Red Devils remain linked with Haaland, but they will have to free up some space in the squad before spending a further £100million-plus to land the Norwegian.

According to Mundo Deportivo, one possibility is Man United swapping Anthony Martial with Haaland.

Martial has fallen out of favour at Old Trafford over the past campaign and will find first-team football even harder to come by next season following the acquisition of Sancho.

One stumbling block for Ole Gunnar Solskjaer and co. though is that Manchester United owner Joel Glazer is a big fan of Martial and previously blocked his exit when Jose Mourinho tried to sell him two years ago.

Whether Solskjaer will have any more luck remains to be seen.

Do you want an exclusive pre-season preview of YOUR club – both in your inbox and through your letterbox? Head over here to find out more and secure your copy

United announced they had agreed on terms with Sancho during the Euros, confirming the transfer would take after the tournament.

Sancho was announced on Friday. Upon completing the move, he said: "It's an honour. Growing up, Manchester United was one of the biggest clubs that everyone knows.

"And of course there is also all the trophies they've won and there have been many iconic players that have come before me. So I'm very happy to be wearing this jersey now."