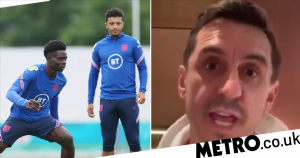 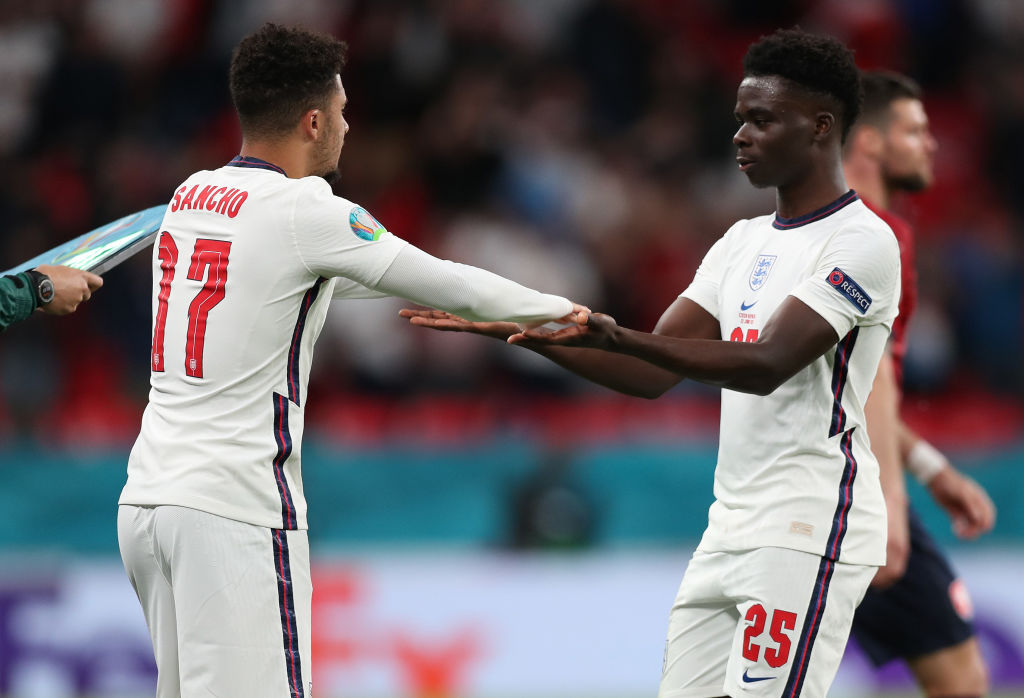 Gary Neville says he would pick Bukayo Saka over Jadon Sancho for England’s Euro 2020 semi-final against Denmark but believes any of Gareth Southgate’s array of attacking options will perform if called upon at Wembley.

The Three Lions will reach their first final at a major tournament since 1966 should they see off Kasper Hjulmand’s dangerous Danish side tomorrow evening.

Southgate made two changes to his starting XI as England put four goals past Ukraine in Saturday’s one-sided quarter-final in Rome, with Sancho and Mason Mount coming in for Saka and Kieran Tripper.

Saka was not considered for selection at the Stadio Olimpico due to a slight knock in training but the Arsenal youngster has since returned to full fitness there are calls for him to be recalled after a pair of outstanding performances versus the Czech Republic and Germany.

On Southgate’s selection dilemma in attack, Neville told Sky Sports: ‘I think [Raheem] Sterling and [Harry] Kane pick themselves but I think between [Phil] Foden, [Jack] Grealish, [Marcus] Rashford, Sancho, Saka… honestly I think you could flip a coin between them all and it could land on any single one of them and I don’t think you’d be disappointed.

‘I think we’ve got such strength in those types of positions. At centre-back we don’t so if John Stones or Harry Maguire got injured obviously I think there would be a drop in quality.

‘But I think in terms of those wide areas and No.10 positions, Mason Mount as well obviously, we’re so blessed that actually I pick one but it’s not because I favour one over the other.

‘I just think Saka has had such an incredible impact on that crowd at Wembley that that’s why I said that he should come back in.

‘That team I picked was a 4-3-3 or 4-2-3-1… I’m not even sure it will be that system. Gareth may match Denmark as he did against the German team and I do think that experience against Scotland – where tactically we struggled against the wing-backs – could mean that he goes to the three at the back again.’

Neville has had full faith in Southgate’s credentials ever since the 2018 World Cup and believes the manager is England’s ‘greatest asset’ at this summer’s tournament.

‘I think what Gareth did in Russia in getting the results that he did and managing the group the way he did was meticulous,’ he added.

‘I think it was an outstanding result to get to the semi-finals and I had full trust in him at that point, knowing how difficult it is to do that job.

‘Coming into this tournament I said that he was our greatest asset. He absolutely is and he’ll get it right tomorrow night.

The former England and Manchester United right-back went on: ‘I was in the stadium against Germany and I was looking at social media and there was an all-out war going out that Harry Kane should be hoicked off.

‘That doesn’t mean he’ll always win but I think he will get it right.

July 6, 2021 Soccer Comments Off on Saka or Sancho? Gary Neville reveals England attack he would pick vs Denmark
NFL News