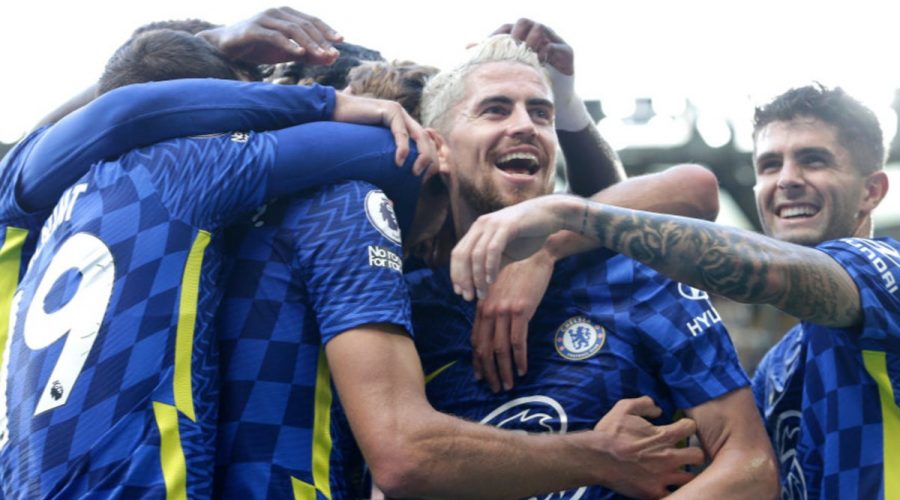 Marcos Alonso of Chelsea celebrates with Jorginho and teammates

Under the constant serenade of “Champions of Europe”, Chelsea’s season begins to a tune of utter certainty. This may be a club defined by the demands of its short-term memory, with a new season bringing a clean slate, unrelenting expectation and an insatiable appetite for silverware. But for the returning supporters at Stamford Bridge, this lopsided victory against Crystal Palace was a chance to revel in the summer’s pent-up ecstasy and prolong the jubilant atmosphere of a procession.

In truth, a scoreline of 3-0 could hardly do justice to the nature of Thomas Tuchel’s side’s dominance, with both the matter and manner of Chelsea’s victory inevitable inside the opening minutes. This was a club riding an unstoppable wave of momentum trampling one taking its first nervous steps into a new era under Patrick Vieira, a superpower for whom dominance is the only satisfaction against an underdog whose instincts are now trained on survival.

And even if three points were widely expected, the sheer superiority of this win will only embolden Chelsea’s hopes of overthrowing Manchester City this season. That is their unmistakable target – one that will be afforded little leniency – and there was nothing here to suggest it is beyond the realms of possibility. In fact, when considering Romelu Lukaku is still to join Tuchel’s squad, it may fast-become a greater likelihood.

Lukaku’s presence was hardly required here, though, in a match where Palace’s many flaws were exposed all too easily. In the 27 minutes preceding Marcos Alonso’s free-kick rippling the top corner, Vieira’s side had barely enjoyed the vaguest hint of possession, were desperately overrun and simply couldn’t subdue the intelligence and intensity of Chelsea’s attack. Christian Pulisic’s bundled rebound on the brink of half-time all but confirmed victory, and a first senior goal for resurgent academy graduate Trevor Chalobah capped an idyllic afternoon in west London with a spectacular driven shot from distance.

For Vieira, though, this wretched first outing offered few crumbs to savour and will do little to stem the whispers of doubt over his ability to guide Palace through a period of such sweeping transition. The hope and optimism surrounding the club, as evidenced by the horde of supporters who maintained song after the final whistle, will not be overwhelmed by one display, particularly in the face of such imposing opposition, but it is still easy to imagine how anticipation might bleed into angst and apprehension over the course of this season. But for one gilt-edged chance that fell to an isolated Wilfried Zaha, they were barely able to mount a considerable threat of note on Chelsea’s goal and, in comparison to Tuchel’s maniacal style of touchline instruction, Vieira cut a quiet, watchful figure as his side succumbed to defeat.

In the teething stages of a new dawn, there is no need yet for doomsday predictions. Marc Guehi and Joachim Andersen both made their debuts and can form a fine partnership in defence this season. Michael Olise will add a much-needed spark when fully fit after joining from Reading this summer, while Conor Gallagher, who was unable to face his parent club, will inject dynamism and authority in midfield.

The club have good intentions, have braced well for evolution, and are hardly in denial about the risk they are inviting. It is a transformation that will be survived by patience and can be proven under far less scrutiny than that of a ruthless Chelsea side that have their own taste for blood. But if precious little can be reaped from today’s performance, it was a clear reminder that while some supporters saw Roy Hodgson’s approach as a shackle, it also offered a safety net. That has been ripped from underneath their feet, and there’s no escaping that now is their time to sink-or-swim.

The same can be applied to Chelsea’s season, albeit in a thoroughly different context. While Palace design their blueprint by trial and error, Tuchel has a clear vision, target and all the necessary tools at his disposal. This was the perfect start to an unpredictable marathon, a match that always amounted to something closer to a celebration, but with such a fierce momentum showing no sign of abating, Chelsea have rarely seemed better set to wrestle back the Premier League crown.