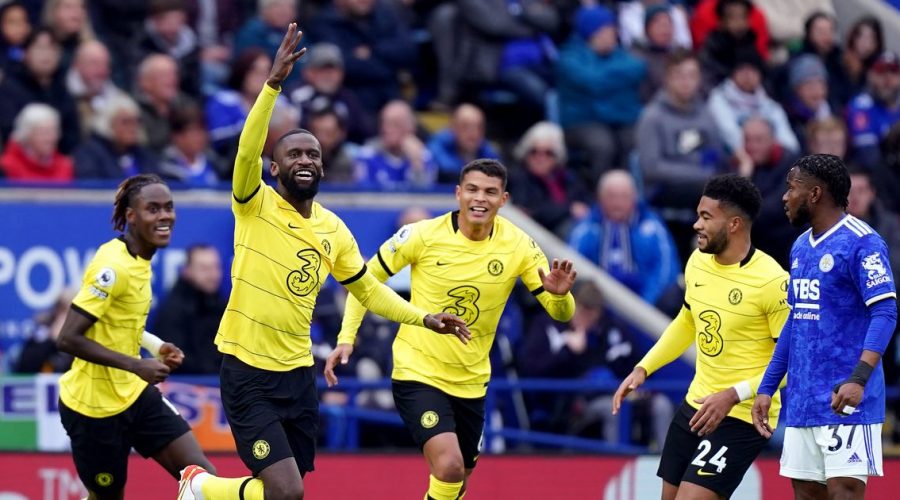 Chelsea extended their lead at the top of the table with a 3-0 victory over Leicester City, but it was a moment of madness from Antonio Rudiger that has stolen the headlines.

The Blues took the lead in the 14th minute when Rudiger glanced a looping header over Kasper Schmeichel and into the far corner.

Former Foxes man N’Golo Kante then made it 2-0 on the 28-minute mark after receiving the ball deep in midfield and charging towards goal before curling a left-footed effort into the near post.

Thomas Tuchel's side then capped off a brilliant performance with a third late on as the two second-half substitutes Hakim Ziyech and Christian Pulisic combined in the 71st minute, with the latter tapping home from close range.

But amidst the brilliant display, the celebration of Rudiger after Kante’s goal caught the eye.

The German international was caught celebrating with his teammates before then biting Reece James’ head.

The camera cut away from the bizarre skull chomping from the central defender but one would imagine that James may not have been pleased with being used as a mid-match meal.

Will Chelsea win the Premier League title? Have your say in the comments below.

This isn’t the first time that Rudiger has been involved in a biting incident, he was caught biting Manchester United midfielder Paul Pogba’s back at Euro 2020.

Pogba attempted to draw attention to the incident by shouting at the officials and trying to explain what happened, but to no avail.

Rudiger is a fan’s favourite at Stamford Bridge but many fear that this season could be his last in London.

The former Schalke man’s contract runs out at the end of the season and the Blues have been unable to tie him down on a new long-term deal, with the extended negotiations capturing the interest of Real Madrid and Bayern Munich.

It is no secret that former PSG boss Tuchel is keen for Rudiger to remain in his side, especially as he continues to put in world-class performances week in, week out.

Speaking of the 28-year-old after Saturday’s victory, Tuchel said: “He has been outstanding. I hope it stays like this and defensive performances. They deserve praise, for doing the invisible work.

“Everyone wants him to stay and that’s pretty clear. But, as I said sometimes there is a delay in everything."

November 20, 2021 Soccer Comments Off on Rudiger involved in bizarre scenes with Reece James during Chelsea vs Leicester
NFL News