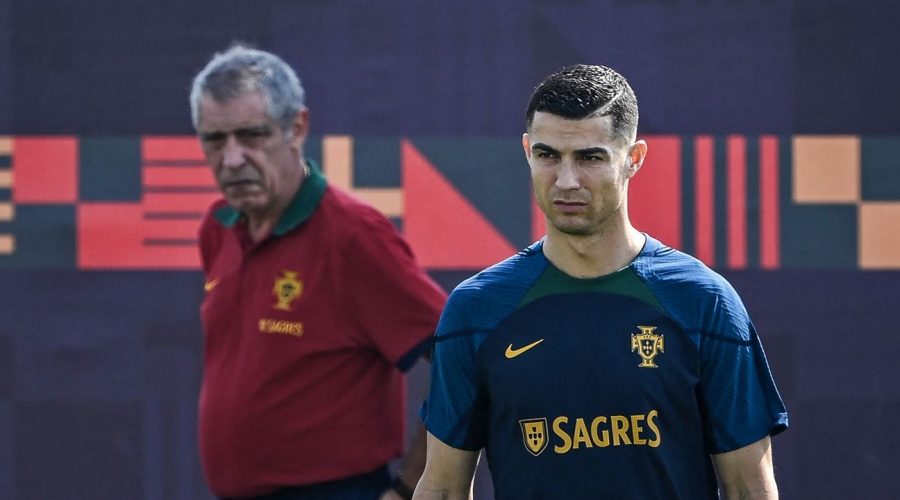 AL SHAHANIYA, Qatar — Portugal midfielder Bernardo Silva tried his best to say all the right things. Speaking at Portugal’s first news conference since arriving in Qatar, and in front of a packed media tent at the Al Shahaniya Sports Club, the Manchester City star had to insist more than once that the fall-out from Cristiano Ronaldo’s bombshell interview with Piers Morgan, which has led to a “mutual” termination of his contract with Manchester United, is not causing a distraction ahead of their World Cup campaign. Eventually, though, the mask slipped.

“I don’t understand your persistence on this subject because there is nothing,” Silva said, wearing the expression of a man who had long since grown tired of the questions. “It is a shame to be talking about this Cristiano situation when we have a World Cup to play.”

It was the same for Ruben Neves when he spoke the following day, with the Wolves midfielder wanting to offer nothing more than his opinion that Ronaldo is in “phenomenal shape.”

The interest around the 37-year-old striker has been such that when Silva arrived to talk, around 50 camera crews — all pushing and shoving in an attempt to gain access — had to be kept outside. It’s traditional for captains to speak at prematch news conferences 24 hours before games, but Portugal decided to sneak Ronaldo in early on Monday morning instead, without telling the assembled media in Qatar, in an effort to avoid some of the media glare.

It was telling that one of the first things out his mouth was a plea to journalists to stop asking his teammates about the interview and the furore it’s caused. “Please, don’t ask players about me, ask about the World Cup,” he said. “I talk when I want to.”

This, though, is precisely the problem.

Sources have told ESPN that among many other issues with the Morgan interview, Man United were angry at the timing because the first bits were teased out in the hours following their dramatic 2-1 win over Fulham and Alejandro Garnacho’s first Premier League goal. Sources inside the Portugal camp have also said that their star player’s decision to speak out just before the squad met in Lisbon raised eyebrows, although there is an acceptance that after 191 appearances for the national team, he “does what he wants.”

But while that might be true off the pitch, the attitude to his influence on the pitch is changing. Sources have told ESPN that Ronaldo is set to start Portugal’s first game in Group H against Ghana on Thursday, but that coach Fernando Santos is already thinking about dropping him for their second game against Uruguay four days later. Santos still believes Ronaldo is Portugal’s best player “in the box,” but given that he’s expecting more of the Uruguay game to be played between the two penalty areas, so he’s considering other options.

– Where could Ronaldo end up after leaving Man United?
– Ronaldo defends his interview: ‘I talk when I want’

In the past, it has been almost unthinkable that Ronaldo, who started just four Premier League games for United this season before his hastily agreed exit, might not start a game at a major championship. It’s even reached the point that Santos has been asked before in news conferences about being “forced” to select Ronaldo, or whether it’s actually Ronaldo picking the team.

The longtime Portugal coach, who has been in charge since 2014, maintains that he has a “great relationship” with his star player, but leaving Ronaldo on the bench would send a clear message that Santos is choosing what he thinks is best for the team rather than bowing to the demands of any one individual. If nothing else, the days of thinking of the Portugal team as “Ronaldo plus 10” are over.

What hasn’t changed, however, is Ronaldo’s popularity. His image is regularly beamed onto buildings in downtown Doha, and his face is plastered across advertising boards around the city’s train network in a bid to promote the World Cup’s official streaming platform. On the day of Qatar’s opening match against Ecuador, one local sat at a table outside a coffee shop telling his friend he was desperate to find two tickets while the tournament was in town — “one to see Lionel Messi, and one to see Ronaldo.”

The desperation to catch a glimpse of Ronaldo also prompted around 300 people to make the 30-minute journey from central Doha to the Al Samriya Autograph Collection Hotel on Friday night so they could wait for Portugal to arrive. The team bus didn’t turn up until after midnight but the fervour with which they were greeted was evidence enough that the crowd thought it was worth it.

Ronaldo has already broken one record while in Qatar, becoming the first individual to pass 500 million followers on Instagram. His appeal off the pitch isn’t in doubt, but for the first time he has arrived at a World Cup with questions — both inside and outside Portugal — about whether his effect on the national team is positive or negative. In a stark contrast, there is no similar debate being had in Argentina about whether or not they should pick Messi, despite their shock 2-1 opening loss to Saudi Arabia.

Typically bullish about his prospects, Ronaldo said on Monday that he would be “surprised” if, at his age, he had anything left to prove. But a poor World Cup — and one that’s likely to be his last — will add to the feeling that maybe, at this stage of his career, he’s not worth the circus that comes with him. After more than a week of headlines off the pitch, it’s time for his football to do the talking.

November 23, 2022 Soccer Comments Off on Ronaldo circus engulfs Portugal after Man United exit. But will it hurt them?
NFL News