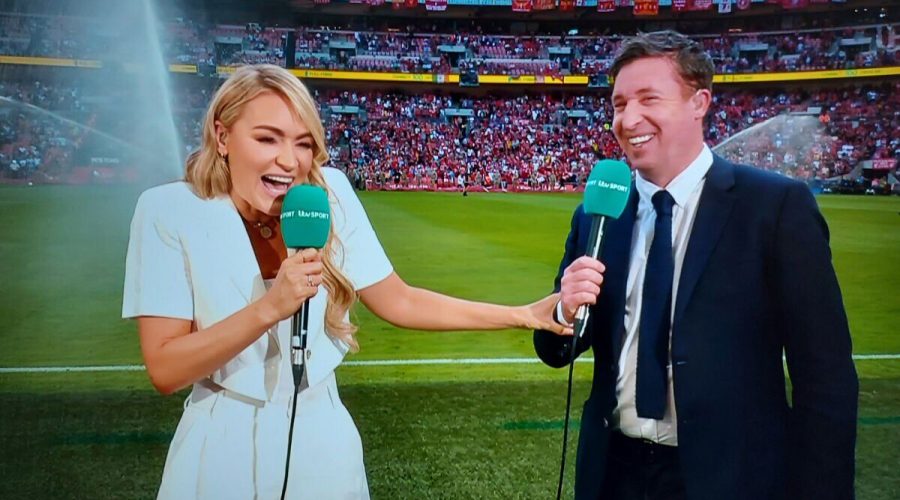 Laura Woods sung to by darts fans at Alexandra Palace

Robbie Fowler and Laura Woods were soaked by the Wembley sprinkler during their pre-match coverage of the FA Cup final. The two were preparing for the final between Liverpool and Chelsea before the water shocked them live on the ITV broadcast.

Woods was interviewing Fowler pitchside as the former Liverpool striker was being honoured at Wembley ahead of the game. Woods referred to whether it could be important that Liverpool warmed up in the shade, while Chelsea prepared for the final in the sun before she and Fowler were cooled off on a hot day at Wembley by the sprinkler system.

After Woods and Fowler were hit by the water, Fowler said: “Right on cue. When you are in the shade you know how warm it is here, thankfully we have just had a little bit of a shower to cool off.”

Before sending the broadcast back to the studio, Woods said: “We are a little bit more wet down here than we were a minute ago with that sprinkler but we will get back to you guys now.”

Before the sprinklers soaked the pair, Fowler was speaking on the impact of Liverpool’s January signing Luis Diaz. He said: “Massive, massive player. He can perform on the big stage and in big games for Liverpool.

“But the fact that Jurgen has backed him to play the big games, he is comfortable with him. We always know that when the manager picks the team, he will have a plan in his mind and he will always have the best players. The last few months since he has come in and played, he has been one of the stand-out players.”

Fowler, who scored 128 goals for Liverpool, also spoke about Sadio Mane and said: “I love watching him, he is an exciting player. He is one of those players that when you come to the stadium, he will get you on the end of your seat.

“He has had an unbelievable season, probably a bit slow to start but then he went to the African Cup of Nations. Since he has come back from that tournament he has been the stand-out Liverpool player. Also keeping Mo Salah in the shade, which last season and the season before it was the other way around.”

When questioned by Woods whether Mohamed Salah was having a poor season despite being the Premier League’s top scorer, Fowler replied: “I don’t think he is having an off season, I think he has had a few off games. I think the expectation levels, everyone expecting Mo to come out and be the absolute star every game.

“But Jurgen backs him, I know he didn’t play against Aston Villa but on the main stage he comes in and Jurgen knows he is capable of a match-winning moment in the game.”

May 14, 2022 Soccer Comments Off on Robbie Fowler and Laura Woods soaked by sprinkler on ITV coverage of FA Cup final
NFL News