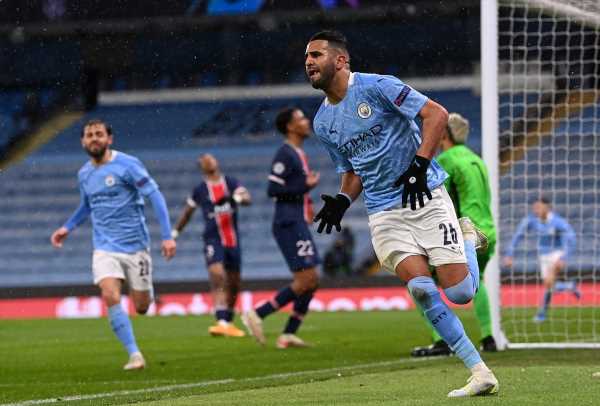 It was only 20 short days ago when Riyad Mahrez’s worry over whether he’d score in the Champions League again for Manchester City had ceased. As the Algerian slotted from the penalty spot in the second leg of the quarter-finals against Borussia Dortmund, a spell of 14 games without ousting the opposition goalkeeper in the tournament ended.

There was overwhelming personal relief: Mahrez’s last goal mixing it with Europe’s elite had come in September 2019 against Shakhtar Donetsk. Since that night in Germany, it has been a tale of personal triumph.

The Algerian has navigated away from the periphery, becoming a prime reason for City’s greatest continental achievement to date, the one every key decision and financial outlay has centred around. The club are in the Champions League final for the first time in their history, owed largely to his three goals that killed off Paris Saint-Germain in both legs of the semi-finals.

On Tuesday night, any hopes of a comeback from Mauricio Pochettino’s men was iced and then completely eradicated by Mahrez.

There were just 11 minutes on the clock in the torrential rain and hail when Ederson launched a long ball down the left for Oleksandr Zinchenko.

His pull back to Kevin De Bruyne ended with the midfielder having a shot blocked, but Mahrez was following up on the right and drove across Keylor Navas to further City’s ascendancy in the tie.

A week earlier in France, it was his free-kick that changed the complexion of the tussle, swinging it City’s way with a 2-1 victory that didn’t seem plausible after a supreme first half from PSG.

Mahrez would admit he slightly miscued his delivery of that deadball that he had requested off De Bruyne: “I wanted to go around the wall to be honest, and I missed it but it went between the two players.”

The intent mattered not as it hit the back of the net and hurt PSG. His first goal in Manchester knocked out the visitors’ ambitions of a fast, goal-lined start.

His second – caressing the roof of the net from six yards after silky play on the break from De Bruyne and Phil Foden – strangled all the remaining hopes of Neymar and co.

Mahrez had pulverised PSG and finally pushed Pep Guardiola’s side over the line.

City booked their first European showpiece for 51 years. And the man pivotal to making it happen has for so long been looked at as a bit-part player, one in danger of being jettisoned and easily replaced.

Mahrez, who has two years left on his contract, has done his bit in the biggest part of the City story so far.

A chance to light up the Champions League final awaits him, but possibly a new deal too: his goals have certainly earned it.

May 4, 2021 Soccer Comments Off on Riyad Mahrez emerges from the fringes to become Man City’s man for the Champions League stage
NFL News