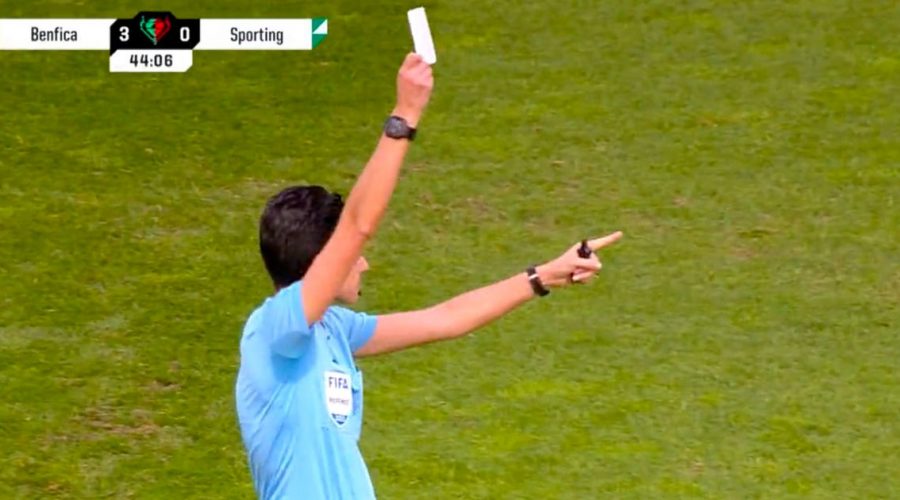 Football's first-ever white card was brandished during a women's derby match between Benfica and Sporting Lisbon.

With hosts Benfica leading 3-0 in the Taca de Portugal cup competition on Saturday (January 21), the referee pulled out not a yellow, not a red, but a white card shortly before half-time.

Viewers theorised the meaning behind the idea, with one cheekily suggesting: "French ref?" Another said:" 100% a piece of paper coloured yellow one side and she showed the wrong side." And a third asked: "Anti perspirant break?"

But the white card was in fact shown to both medical teams who had rushed to the aid of a fan who was feeling unwell in the stands.

It's part of a new initiative to recognise and praise fair play during games. According to JOE, it's been introduced to improve ethical values in the sport.

The Benfica official looked rather confused after being shown the white, with cards of course usually associated with punishment.

What's your thoughts on the white card? Let us know in the comments section.

Many watching on at home were also less than convinced. One questioned: "So what’s the point in it?"

A second argued: "There’s already so much time wasted with the ball out of play, are we seriously gonna stop play even more to hand out meaningless cards?"

"So the white card is practically useless. What a waste of time," commented one, while another wrote: "But what do you get for it? Seems odd to have a card that's essentially a pat on the back."