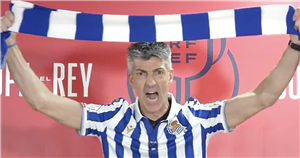 Known as just Imanol, the 49-year-old spent 10 years on the books at the club as a youngster before joining their staff as a coach in 2011 and working his way up to head coach.

Since taking over as boss, Imanol has won 47 of his 108 fixtures, and has now helped his side to their first trophy since 1987 as Bilbao are made to regroup for the 2020/21 final in two weeks time.

In unusual circumstances, Mikel Oyarzabal scored the only goal of the game in what was the delayed final from the 2019/20 season, which was hit by lengthy postponements.

After speaking calmly to the media about their success, Imanol was approached with a club shirt and scarf which he wore and held aloft respectively.

He then began to emotionally chant: “This is for all of you, Guipuzcoa! For all those who feel the Real! Come on Real! Real! Come on, Goazen!”

He had said before the match: "I am calm, it has been good for us that even some players were not there.

“We are very focused but obviously you see how the fans are and the messages to the team.

“It is a long awaited and much dreamed final and we are going to fight it to the death.

"I am also a fan and also a fan. I am very excited and very proud of what this team has done in the last two years. We have done something great and now we can make history.

"Enjoying, fighting and trying goes down in history. The team that comes out with the greatest personality will have a lot to win.

"As the coach, imagine how I feel about this final. Responsible and at the same time calm. Let the fans feel proud of their team."