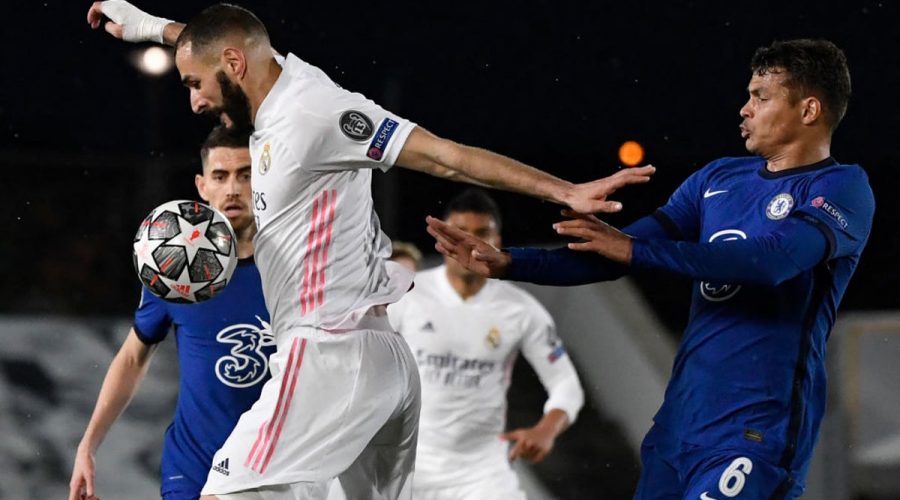 Chelsea started strongly but had to settle for a 1-1 draw away to Real Madrid in the first leg of the Champions League semi-final.

Timo Werner spurned an incredible chance just ten minutes in, firing straight at Thibaut Courtois from close range after a sweeping move from the Blues, but just a few moments later Christian Pulisic maintained composure to round the keeper and bury an early away goal.

It took until midway through the half for Real’s first attempt, with Karim Benzema grazing the post with a left-footed effort from 20 yards – but it was the Frenchman who scored the equaliser with his next chance, a thunderous finish after a set-piece.

After the break it was a much more cagey affair on a sodden pitch, with few clear sights of goal at either end. Eden Hazard came off the bench to feature against his old club, but had little impact as both teams settled for the draw somewhat and with Chelsea’s defence proving as well-organised as usual.

Here are five things we learned as the last four got underway at the Estadio Alfredo Di Stefano.

No surprises as far as Chelsea were concerned when the starting line-ups were named, at least in terms of the shape.

Thomas Tuchel has been consistent with his 3-4-3 selections, altering the roles for attackers at times but ensuring a familiar style of play and keeping three at the back.

More of an eyebrow-raiser was Zinedine Zidane opting to match up; not wanting to leave Nacho out was the correct call, but instead of pushing him to full-back the Real boss went with a three of his own, Marcelo pushing to wing-back.

In the opening stages it was abundantly clear which set of players was more used to the demands of the system.

Real’s left flank in particular was exposed time after time when pace was in the game, though the familiar three-man midfield – the one difference between the tactical deployments was the centre of the park – did allow the Spanish side to dominate possession in long stretches of almost ‘neutral’ play and territory.

Pulisic, Werner and a mix-and-match solution

In less than 15 minutes, the promise and the purgatory of Chelsea’s German striker was visible.

Timo Werner was one of those who split the Madrid defence over and over, his speed and movement off the shoulder always giving the Blues an outlet. However, it wasn’t to be his night.

A miss from point-blank range cannot really be excused, at this level and in a game of this magnitude, while soon after he could have been played in three times further. Two passes were overhit out of play, one saw him lash an effort wide of the near post, off-balance.

By contrast to Werner’s stumbling and uncertain display, Christian Pulisic became the highest-scoring American in Champions League history and – in the first half at least – produced a vibrant showing with direct running, real intent in his forward movement…and the kind of composure Werner is sorely lacking.

The away goal could yet prove extraordinarily crucial.

28 and counting. If Real aren’t out of the tie yet, it’s because of two reasons: Chelsea profligacy and Karim Benzema’s best-ever season.

It’s not yet his best-ever scoring season, but that would merely be a deserved additional footnote if he eclipses his 11/12 haul of 32 – for importance, for consistency, for being the go-to man of the team, this has been Benzema’s best.

No Real fan could realistically claim it to be an exaggeration to suggest the striker has been the club’s finest individual this term.

He had no service for the majority of the game, but fashioned two chances: one a dribble and powerful drive, scraping the woodwork, before the other showed an instinctive piece of headed control and an unstoppable hooked finish.

They’ll need him to be just as clinical in the second leg at Stamford Bridge.

The pre-game focus was on whether Eden Hazard would be fit enough to play; he eventually came off the bench with 25 minutes remaining, but his impact was minimal, his on-pitch work marginal.

In the second leg, with more emphasis on Real Madrid needing to score at least once, he could be called upon for more serious work.

The real story in terms of former players was Courtois: the ex-Chelsea stopper made a huge save in the opening stages with that Werner chance, a big foot to divert the ball clear, and had to be alert more than once to either save more routine shots or claim dangerous aerial balls.

Mason Mount had a couple of efforts on goal and Thiago Silva tried his luck too, but Courtois – like Benzema at the other end of the pitch – has enjoyed a largely exceptional season.

Many might have expected the game to go this way, but it wasn’t until the Real Madrid equaliser that it started to become this way, and both sides more or less seemed to accept that unless they were willing to take big risks in committing players forward – and they were not – then the first leg would end as a draw.

Back in London for the second leg, it’s all to play for. Chelsea won’t need to go all-out from the start, while Real face a very different task to when they flew to Anfield in the last round, protecting a hefty lead.

The advantage is a slender one at this stage, but it is unmistakably Chelsea’s.