Real Madrid have found a new showman. Vinicius Junior literally bowed to the singing section of the Santiago Bernabeu after his dribble and shot ended in Kiko Olivas deflecting the ball past his own keeper to give the home side the lead.

The Brazilian teenager also assisted Karim Benzema who won a penalty which Sergio Ramos converted to give Madrid a 2-0 win.

Vinicius Junior, 18, came on with 20 minutes left as Madrid were sliding towards another goal-less draw. Oh for a Ronaldo lamented the frustrated home supporters. Either one would do. 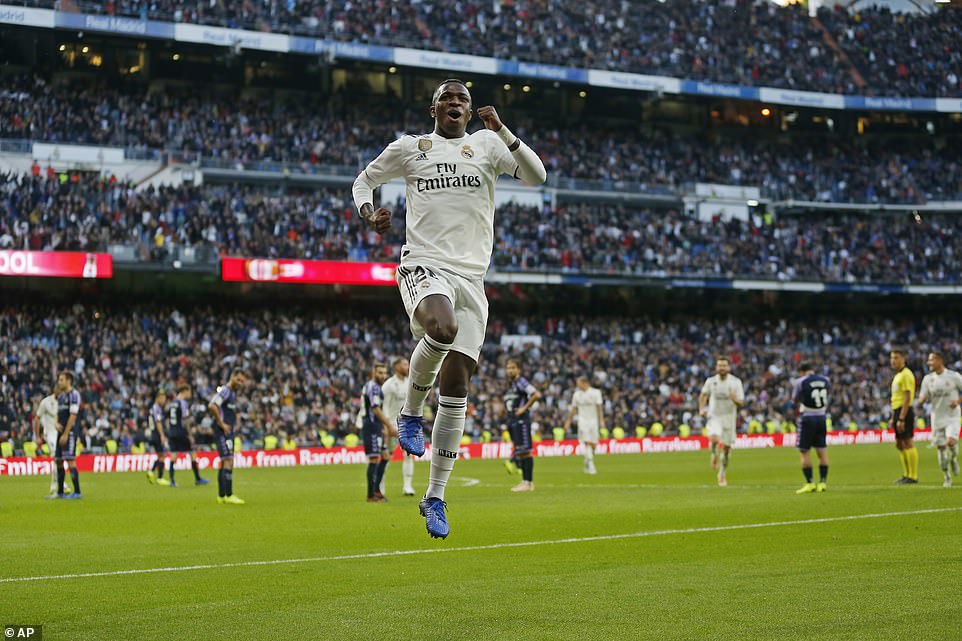 A Cristiano Ronaldo like the who the club sold in the summer for €100m or a Ronaldo Nazario like the Brazilian legend who was back at the Bernabeu to watch from the directors’ box as the club he now owns so nearly took a point off of Real Madrid.

He had never enjoyed a 0-0 in the Santiago Bernabeu quite this much until Vinicius struck to break the deadlock on 83 minutes.

That’s the Vinicius that Ronaldo presented at the Bernabeu when the Flamengo prodigy signed and when he was still working as a Real Madrid ambassador. He completely changed the mood when he came on. 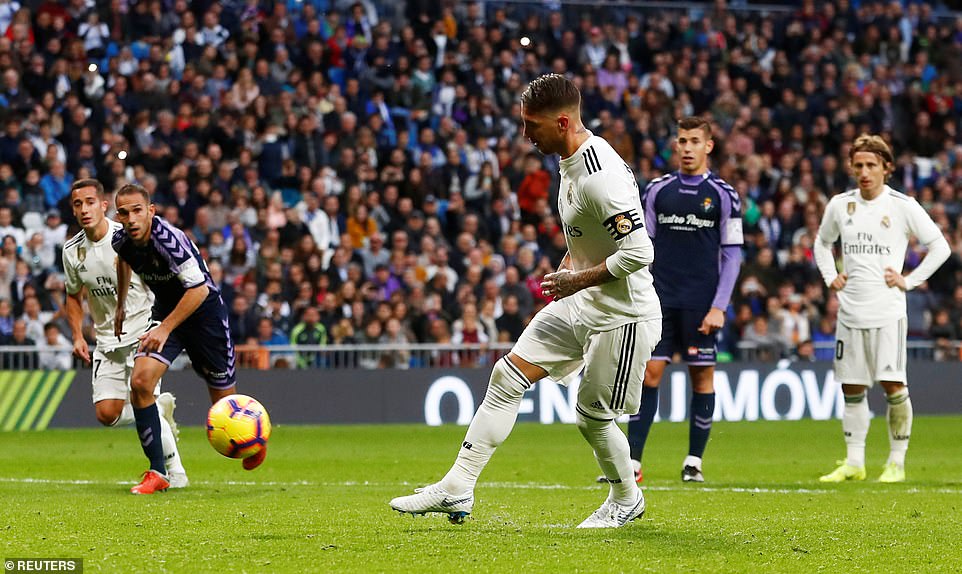 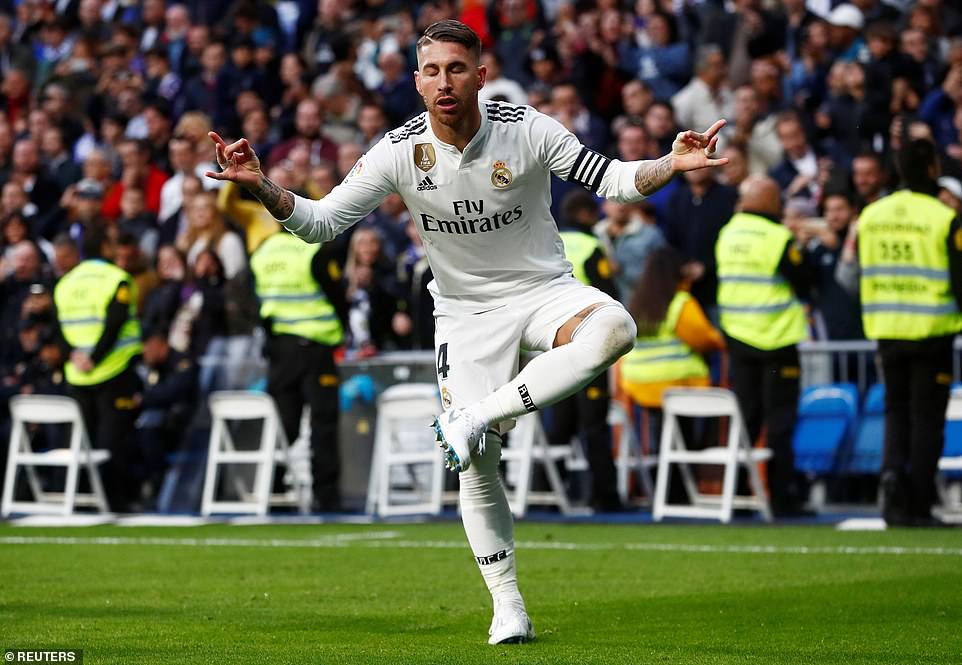 Valladolid had hit the frame of the goal twice but they were undone by a deflected shot from a player who already has the Bernabeu in the palm of his hand. He then passed to Benzema who provoked a penalty that Ramos converted to confirm the three points.

The good news for Real Madrid is not such good news for Gareth Bale. He was whistled as he was taken off with 20 minutes left. He was already the man supporters wanted left out to make way for Vinicius – that is not going to have changed after this game.

The first half was a tale of ‘different day same stale performance’ from Madrid. Benzema rolled a cross-shot wide of Jordi Masip’s far post but Madrid ‘s chances were few and far between and by and large taken half-heartedly. 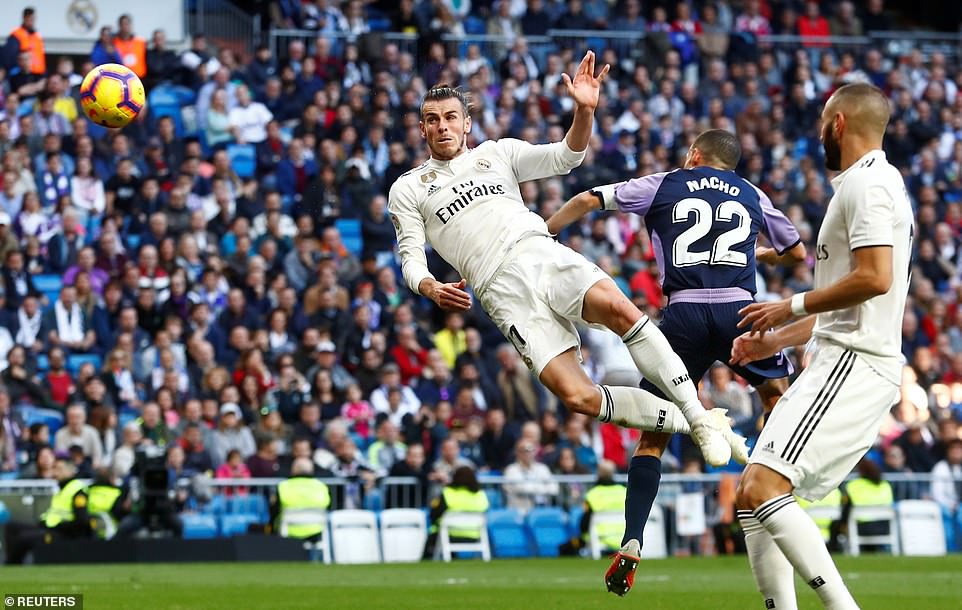 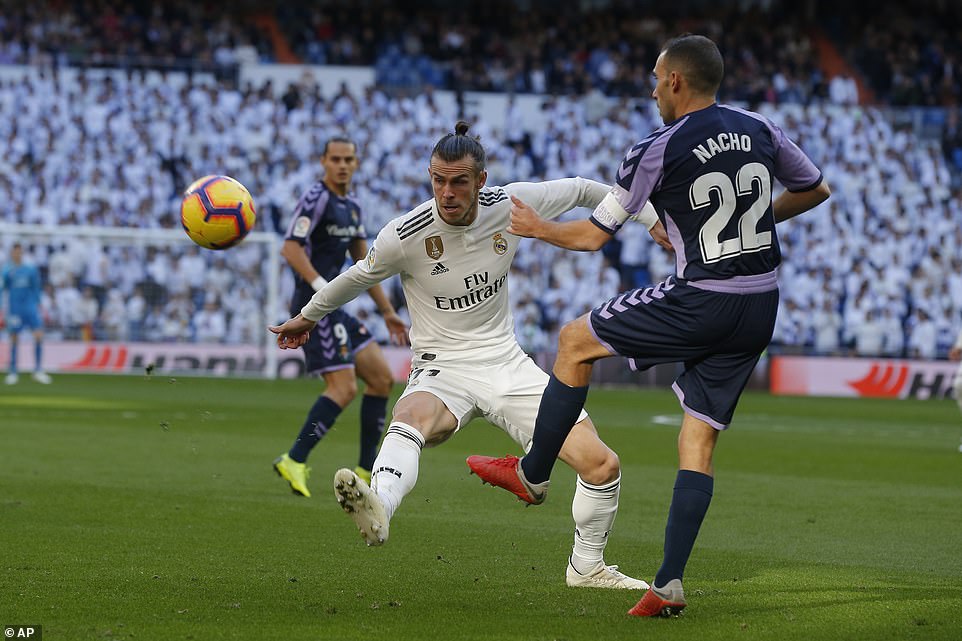 Bale flashed a header goalward from Sergio Reguilon’s cross and Masip blocked it. Reguilon then got around the back of Valladolid again but Benzema’s header was weak and on closer inspection was not even a header – he handled the ball into Masip’s arms.

Leo Suarez went down under a challenge from Alvaro Odriozola at the other end but his claims for a penalty were turned down. The chance helped Valladolid grow in confidence and on the 20-minute mark the sight of the visitors comfortably holding their own brought the first timid whistles from around the stadium.

Valladolid’s next chance came when Antonito dinked an effort over Thibaut Courtois and over the bar. That provoked more whistles. And the whistles were aimed directly at Bale when he threw the ball straight at the Valladolid keeper Masip. His idea had been to send Benzema clear but for that the forward would have had to run across the goalkeeper and it was optimistic to think he would do that. 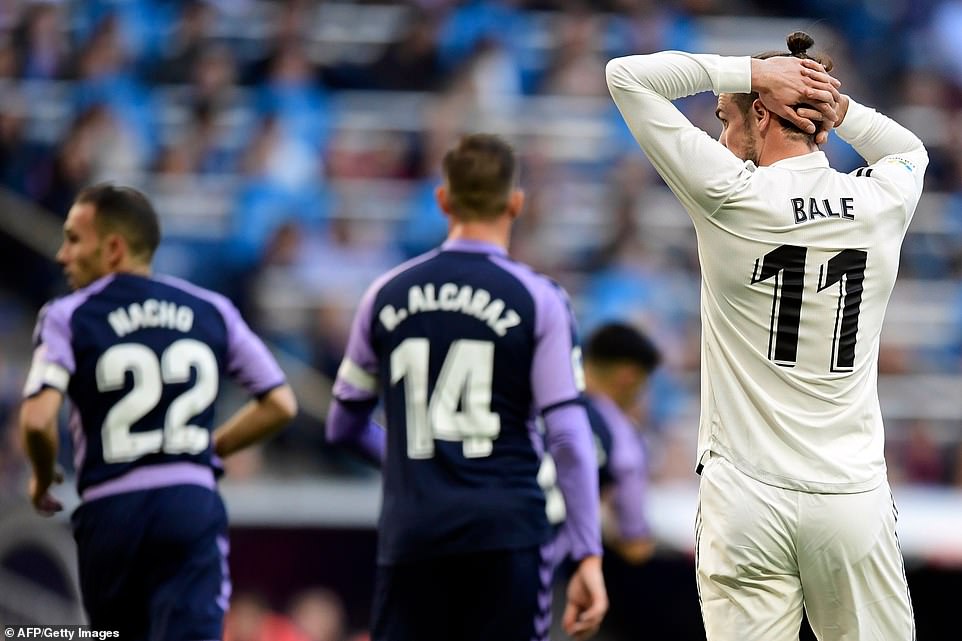 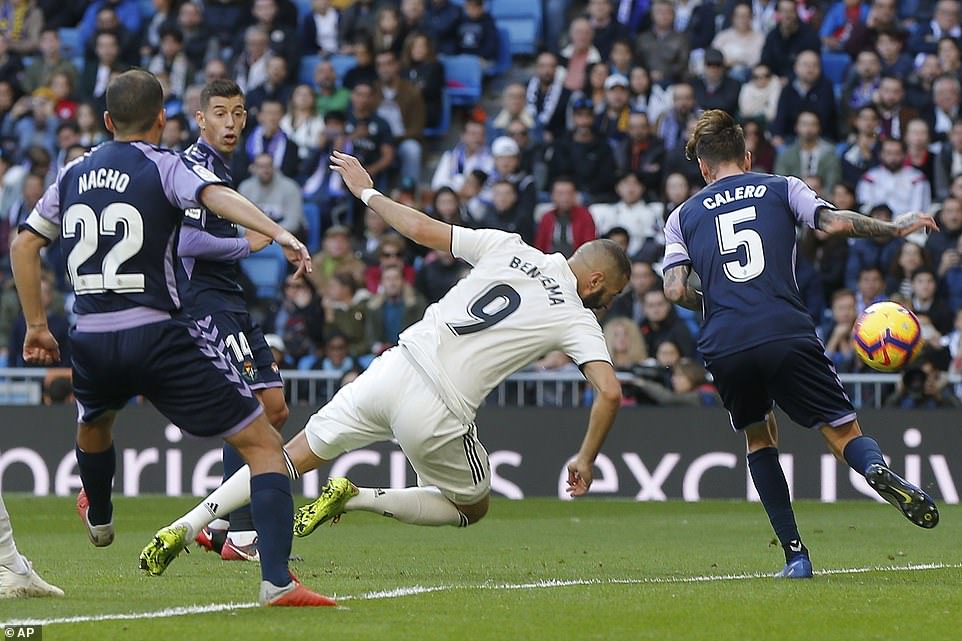 Benzema was then late again, this time with a tackle that gave Ruben Alcaraz a chance from a free kick that he hammered straight into the wall. Madrid had been poor. Their young full-backs Reguilon and Odriozola had done well enough but there was no spark upfront and things did not change at the restart. Another weak finish from Benzema was whistled by the Bernabeu. They were getting increasingly impatient and Solari responded by taking off holding midfielder Casemiro and bringing on Isco.

Valladolid were next to go close and they were very close with a shot from Toni Kross deflecting off of the bar. It happened again when Toni Villa cracked a much cleaner effort onto the frame of the goal – cue more whistles from the Bernabeu.

Time was running out for Solari – after all this was one of only three games he has to land the big job.

He first brought on Lucas Vazquez for Bale. The Welshman was whistled as he walked off, it was fortunate for him that he was already close to the bench and did not have far to walk. Asensio was the next to be hooked with Vinicius coming on. Asensio was also jeered as he left the pitch.

Madrid were in a bad place but Vinicius with a little help from a deflection has lifted them out of it and may just have changed the course of the club’s so-far miserable season. 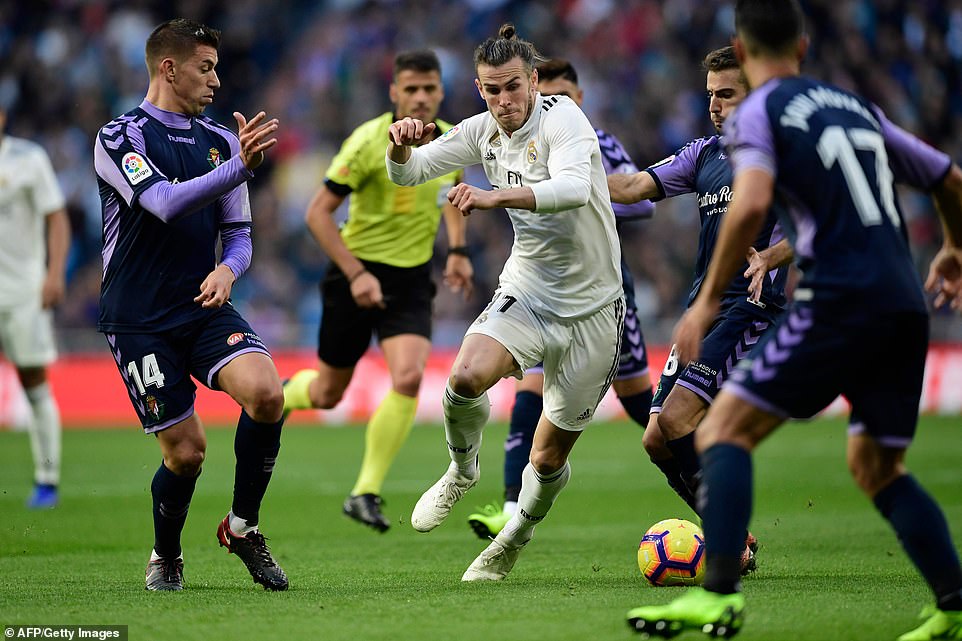 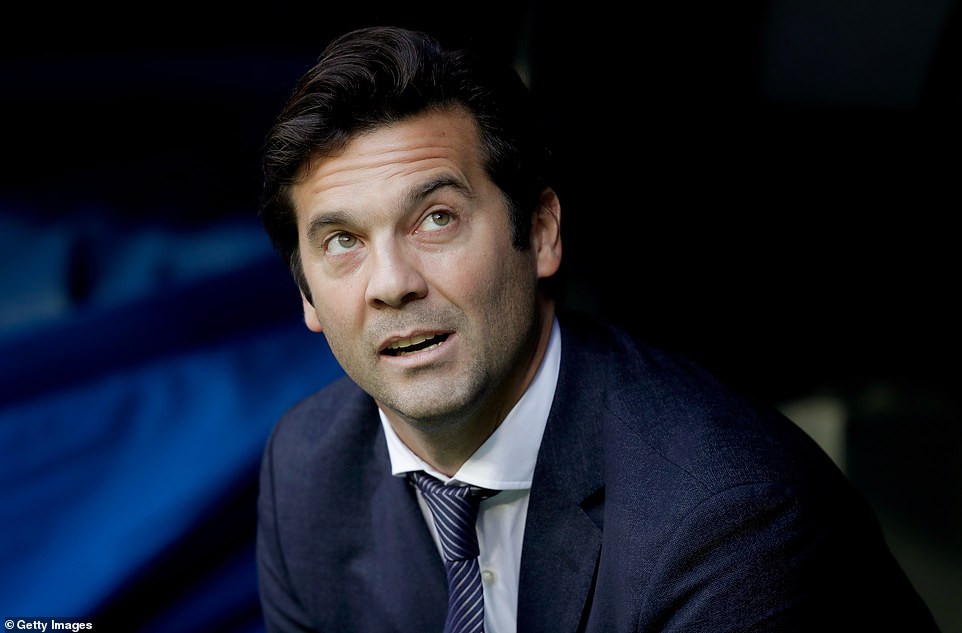 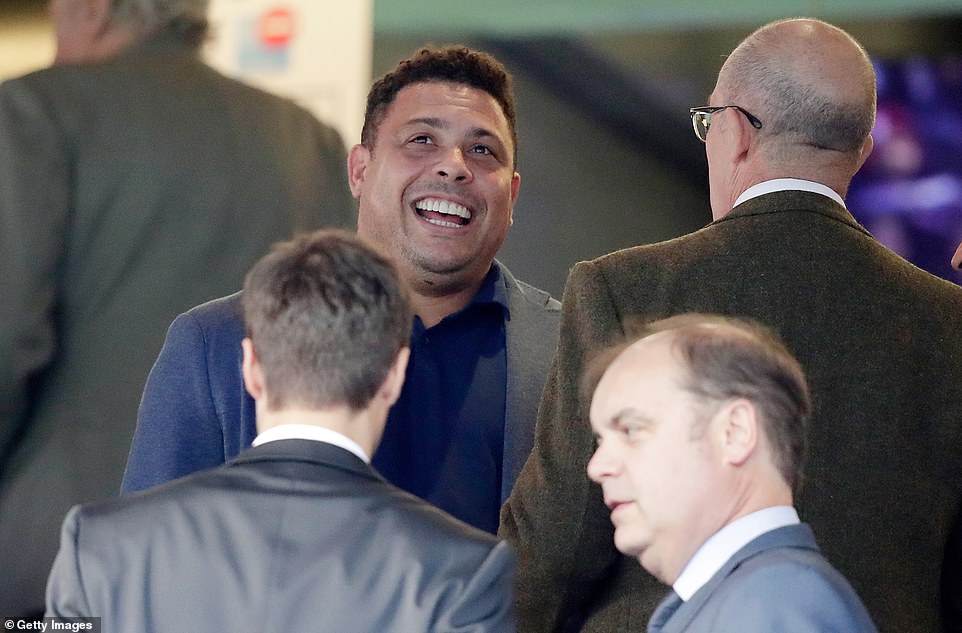