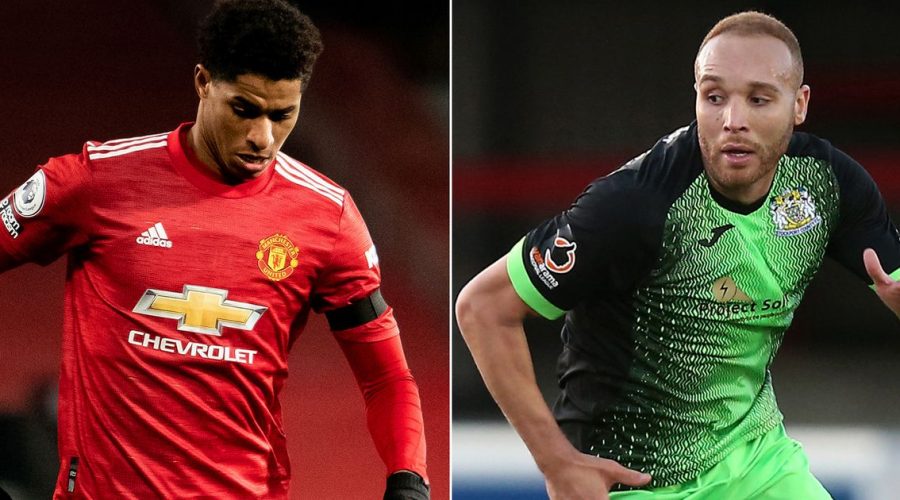 Marcus Rashford's formidable campaigning work has come as no surprise to his family.

Rashford's profile has transcended football with his success in lobbying the Government to end child food poverty, which has earned him an MBE at just 23.

Rashford's cousin, Stockport County midfielder Lois Maynard, will be in the spotlight himself on Monday when the non-league side host Premier LeagueWest Ham in the FA Cup.

Maynard, 31, is close to Rashford and has seen first-hand his development from aspiring youngster into a superstar for club and country, playing at the highest level.

And he revealed the Manchester United and England striker has always had an awareness of issues beyond football and a desire to help the most vulnerable in society.

“Marcus has always seemed older than he actually is,” said Maynard.

“He's always been the sort of person who's interested in trying to make a change and now you're starting to see the fruitions of that.

“We've probably got closer as he's got older. I used to go and watch his games when he was younger, with his older brothers, Dwaine and Dane.

“What he's done has made me extremely proud. I'm interested in that kind of thing myself, trying to make a change in society.

“So to see your younger cousin doing that, as well as being amazing on the field, makes me really proud.

“People might look at what he's done and say it's a great achievement, but that's just Marcus being himself.

“He doesn't feel that playing at the highest level, having the money and the ability to get whatever you want, should change who you are.

“It's normal for him to have conversations about these issues, but now he understands he's got the ability to affect many lives.

“A lot of people can relate to Marcus, which is what makes him such a likeable character, someone who's authentic and wants to make a change.”

Maynard, whose career has also taken in spells at Tranmere and Salford City, said he knew Rashford was destined for the top from an early age.

“Oh God yeah! The first time I saw Marcus kick a ball, he was seven or eight, and it was something even I couldn't do at 15 or 16!” said Maynard.

“I thought 'this guy's got a chance!'. He was obviously very, very talented, but talent doesn't always give you the upper hand.

“But knowing he had a good family around him, keeping him grounded, he had the best opportunity to make it.”

After a turbulent period, which saw them go into administration, Stockport are on the up, pushing for promotion to League Two, under a new owner who has invested heavily in the club.

“The club is heading in the right direction,” said Maynard. “They want to be back in the league, then the Championship, in a certain time.

“Having the opportunity to play a team like West Ham, in the FA Cup, makes it more evident we're heading in the right direction.”

Has Rashford been on the phone to his cousin with some advice about facing the Hammers?

“We've been on the phone,” said Maynard. “He said good luck and I've asked him to sort out a player's shirt for me – but we'll keep that quiet for now!”

Who will win the FA Cup? Have your say in the comments below