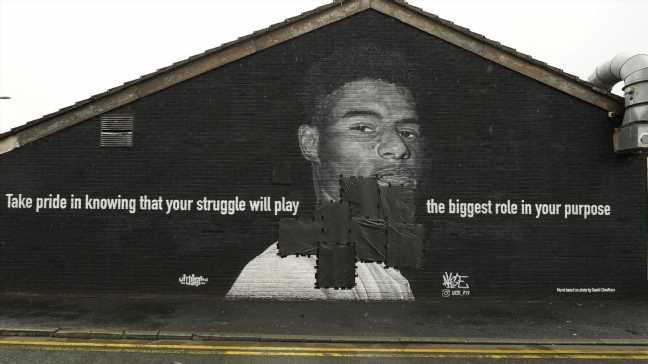 Marcus Rashford said he was “on the verge of tears” by the messages of support he received after his mural in the city of Manchester was vandalised following England’s defeat to Italy at the Euro 2020 final on Sunday.

– Stream LIVE games and replays on ESPN+ (U.S. only)

Rashford’s missed penalty contributed to England’s 3-2 shootout loss at London’s Wembley stadium, which prompted online racist abuse against him and teammates Jadon Sancho and Bukayo Saka, who are all Black.

A mural depicting Rashford in his hometown was later vandalised.

The mural, a community street art project based on a photograph by Daniel Cheetham and painted by street artist Akse, was made in Rahonour in Withington, Manchester, and read: “Take pride in knowing that your struggle will play the biggest role in your purpose.”

The defaced portions of the mural were covered in tarp with people also posting letters of support and red hearts on the wall.

Rashford responded on Monday saying how positively “overwhelming and seeing the response in Withington had me on the verge of tears.”

“The communities that wrapped their arms around me continue to hold me up,” he said on social media. He also tweeted out images of positive hand-written notes he has received.

The Manchester United forward was hailed for his work in campaigning for free school meals for the most vulnerable of children in British society.

“I can take critique of my performance all day long… but I will never apologise for who I am and where I came from,” Rashford added.

The vandalism was widely condemned.

“It is a despicable, shameful act. And 99.9% of people will be utterly appalled by it and want the strongest action taken,” Manchester Mayor Andy Burnham said of the incident.

Following Rashford’s penalty miss, Sancho and Saka also failed to score, allowing Italy to claim the trophy, and all three were the targets of racist abuse on social media.

“The FA strongly condemns all forms of discrimination and is appalled by the online racism that has been aimed at some of our England players on social media,” an FA statement read.

“We could not be clearer that anyone behind such disgusting behaviour is not welcome in following the team. We will do all we can to support the players affected while urging the toughest punishments possible for anyone responsible.”

The England team also released a statement condemning the abuse, which read: “We’re disgusted that some of our squad — who have given everything for the shirt this summer — have been subjected to discriminatory abuse online after tonight’s game.”

England, who had reached their first major final since 1966, took the lead in the match through Luke Shaw’s early goal before Leonardo Bonucci equalised for Italy in the second half and the score remained 1-1 until the end of extra-time.

July 13, 2021 Soccer Comments Off on Rashford on ‘verge of tears’ over positive notes
NFL News