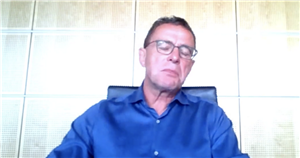 Rangnick, 63, is set to leave Lokomotiv Moscow and become United's new interim manager, according to reports on Thursday.

The former RB Leipzig coach is expected to sign a six-month deal, including bonuses relating to the top four and Champions League.

Once his time as interim boss is over, Red Devils chiefs are planning to make the veteran German the club's first Director of Football.

United fans have reason to be excited at the imminent appointment of a progressive coach who plays an attractive style of football – but at least one of the club's players could be forgiven for feeling a little worried.

In 2020, Rangnick voiced his concern at the the ability of Red Devils left-back Luke Shaw.

The German singled out the England international as someone who should be replaced because he is not up to the right standard.

"I also think that they could do with a left-back," Rangnick said.

"I know they have Luke Shaw, but i'm not so sure if he's still on the same kind of level you need to be for a club like Manchester United."

Should Ralf Rangnick drop Luke Shaw? Let us know your thoughts in the comments section below.

However, a lot has changed since then, with Shaw establishing himself as one of the game's leading full-backs thanks to his displays for United and England during the European Championship.

Indeed, upon learning of the star's "Shawberto Carlos" nickname, given to him by his England team-mates at Euro 2020, Brazil great Roberto Carlos even got in touch with the 26-year-old

"He was the best player in the tournament," Carlos said. "He has to keep it up; he has to continue playing like that. That’s important."

Strong praise, although Shaw's form so far this campaign has tailed off once more, so it is not clear where he stands in Rangnick's thoughts right now.

If Ole Gunnar Solskjaer's replacement remains unsure of the left-back's talents, he could turn to Brazil international Alex Telles, who has found opportunities limited since his arrival from Porto last season.